This was published as a Wall Street Journal Think Tank column on September 18, 2015. 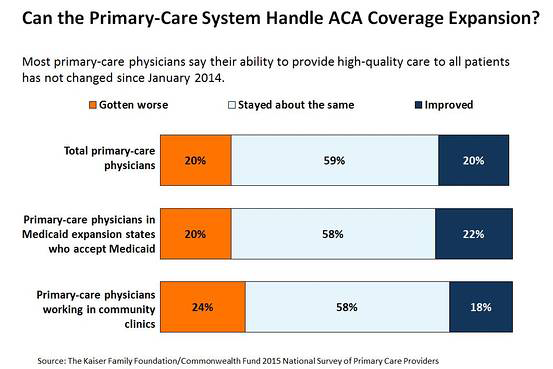 Survey results of primary-care physicians polled by the Kaiser Family Foundation and the Commonwealth Fund about their ability to provide high-quality care to all patients since the Affordable Care Act coverage expansions in January 2014.

Before the Affordable Care Act’s major provisions for coverage expansion were implemented in January 2014, there were concerns that the primary-care delivery system would struggle amid increased demand for services from patients gaining coverage, many for the first time. It’s not hard to find anecdotal reports of problems, but a systematic survey of primary-care physicians by the Kaiser Family Foundation and the Commonwealth Fund indicates that, so far, these fears have largely not come to pass.

As the chart above shows, most primary-care physicians (59%) said their ability to provide high-quality care to all their patients had stayed about the same since the ACA went into effect, with equal shares (20%) saying it had improved and had gotten worse. Even among physicians most affected by the coverage expansions–primary-care physicians accepting Medicaid and working in states that expanded the program, and those working in community clinics–most said their ability to provide quality care had stayed about the same, with about one in five saying it had gotten better and a similar share saying it was worse. Results were similar when we asked physicians about patient satisfaction and experiences with care: Most said things had not changed under the ACA.

Not yet two years into the ACA’s coverage expansions, it is still too early to tell what the longer-term effect will be on demand for primary-care services. It may be that, armed with coverage, those who were previously uninsured are seeking health services from a broader group of primary-care providers, spreading the load. Or it may be that the net increase of 16 million in the ranks of the insured is less of a burden on the system than expected when spread across all 50 states. Certainly, spot problems are likely and expanded Medicaid coverage could exacerbate issues that Medicaid beneficiaries have finding certain providers who will see them in some states. But overall, the nation’s front-line providers report that their practices have been able to keep up with demand without a negative impact on quality of patient care.