This was published as a Wall Street Journal Think Tank column on June 19, 2015. 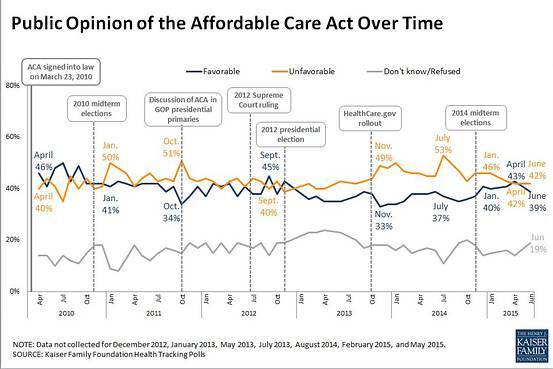 There has been a lot of discussion about the political implications for Republicans if the Supreme Court rules for the plaintiffs in King v. Burwell, disallowing federal insurance subsidies for about 6 million people in 34 states with federally operated insurance exchanges. One scenario is that Republicans will agree on a clean fix, adjusting the legislative language to allow subsidies to continue to be provided; or there will be a fix that the president can sign with some modest concession to the right. Another scenario is that Republican hard-liners and moderates will be unable to agree on legislation and states will be left to decide on their own whether to set up marketplaces, a process that will take time to unfold.

We are unlikely to know how this will play out until the court issues its ruling and Republicans in Congress and the states see how intense the political pressure is to fix the problem. That heat will not be one-sided: A ruling for the plaintiffs will be used by Republicans to validate their criticisms of the Affordable Care Act and what they view as the administration’s overreach in implementing it. If history is any guide, the public will view the arguments from each side through partisan prisms.

Opinion on the ACA has been stuck in a partisan logjam since the law was passed in 2010. As the chart above shows, it has not moved dramatically, even with major events such as the 2012 Supreme Court ruling on the constitutionality of the ACA or the troubled rollout of HealthCare.gov in October 2012. With Republicans overwhelmingly against the law, Democrats for it, and most independents leaning one way or the other, there isn’t much room for movement in opinion.

Still, a failure to fix the problems resulting from a ruling for the plaintiffs would almost certainly result in a steady stream of media coverage of the personal stories of people who lost subsidies and their health insurance, and Republicans would feel the heat much like they did after the government shutdown. That could affect the standing of the party and its 2016 candidates even if it does not move broader opinion on the law.

Potentially greater political pressure could come next year. If enrollees lose subsidies as a result of the court’s ruling, many will find their insurance unaffordable and leave the marketplaces. The healthy will be more likely to leave and the sick, who need coverage the most, will be more likely to stay and pay. With a sicker risk pool to cover, premiums will begin to rise for anyone buying coverage in the non-group market in the affected states when companies establish new rates in January 2016.

The political fallout from a ruling for the plaintiffs will also be seen in congressional districts with contested races in the 34 states that stand to lose federal insurance subsidies. Democratic candidates can be expected to hold a loss of coverage for constituents against their Republican opponents, and Republicans who support legislation to repair the ACA that is not viewed as tough enough by conservatives may face challenges on their right flank as well.

If the administration prevails in King v. Burwell, the law will move off the front pages and implementation will move forward in a much calmer political environment–until campaign season begins to heat up. The outcome of the 2016 elections will then be the next, and possibly last, big hurdle for the ACA.