This was published as a Wall Street Journal Think Tank column on May 11, 2015. 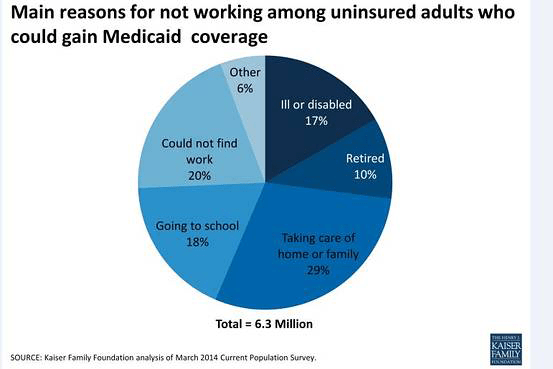 In Utah, Indiana, Arkansas, and several other states, conservative governors or legislatures want to make work requirements for newly covered beneficiaries a condition of expanding their Medicaid programs. Partly, this is the latest strategy by red-state governors and legislators seeking political cover to expand Medicaid in anti-Obamacare states where Republicans have  clear legislative majorities. Expansion would bring billions of new federal dollars to help cover uninsured residents. So far the administration has opposed these efforts, saying work requirements are inconsistent with the purposes of Medicaid, and the National Health Law Program says it is not permissible to impose work requirements on people who get coverage under Affordable Care Act Medicaid expansions.

But the disagreement over tying work requirements to Medicaid expansion goes much deeper than partisan politics or legal interpretations of what the Medicaid statute allows.

These conservative governors and legislators see Medicaid as a welfare benefit that can reasonably be tied to requiring able-bodied people to work or look for or train for a job, just as welfare payments were tied to such requirements.

Democrats and liberals see Medicaid as a health benefit separate from welfare, noting that the link between Medicaid and cash assistance was severed as part of the 1996 welfare reforms. They see it as inequitable to offer government subsidies to moderate-income people to help them buy coverage on the insurance exchanges, with no work requirements, while requiring that lower-income people work for their health coverage. And it’s hard to work, they would argue, if you don’t have decent access to health care and are sick.

How people feel about a work requirement for Medicaid might depend on how it is defined. Is it working full time, or part time, searching for work, being in a job training program, going back to school (such as a community college), or all of these things?

A Kaiser Family Foundation study found that 57% of adult Medicaid beneficiaries are working. And, as the chart above shows, the vast majority who are not working are in school, have a disability, or are taking care of a family member or are retired–all of which would exempt them from most traditional welfare-to-work programs. Many said they could not find a job, which is obviously a problem in the still-recovering economy.

In the end, whether you support or oppose linking work requirements to expanded Medicaid coverage probably comes down to whether you see government-supported health coverage as another form of cash assistance or as a way to help ensure that low-income people get the health care they cannot otherwise afford. If there is one thing I learned implementing large-scale welfare reform programs as New Jersey’s human services commissioner many years ago, it is this: The details matter a lot in terms of how these Medicaid work requirements would affect people–and whether they are punitive or help give a leg up to people who can and want to work.