Expanded health insurance coverage through the Affordable Care Act (ACA) is having a major impact on hospital payer mix across the country.  Similar to other reports recently released, new data examining hospital discharges in 16 states with data through the second quarter in 2014 show increases in Medicaid and declines in uninsured or self-pay discharges in states that implemented the Medicaid expansion.  These trends hold true for all hospital discharges as well as for specific services such as mental health or asthma. This information adds to a growing body of evidence indicating that coverage expansions are affecting providers and may lead to decreases in uncompensated care for the uninsured.  These 16 states include 6 states that have not implemented (Florida, Georgia, Indiana, Missouri, Virginia, and Wisconsin) and 10 states that had implemented the Medicaid expansion (Arizona, California, Colorado, Hawaii, Iowa, Kentucky, Michigan, Minnesota, New Jersey, New York) by the second quarter in 2014. 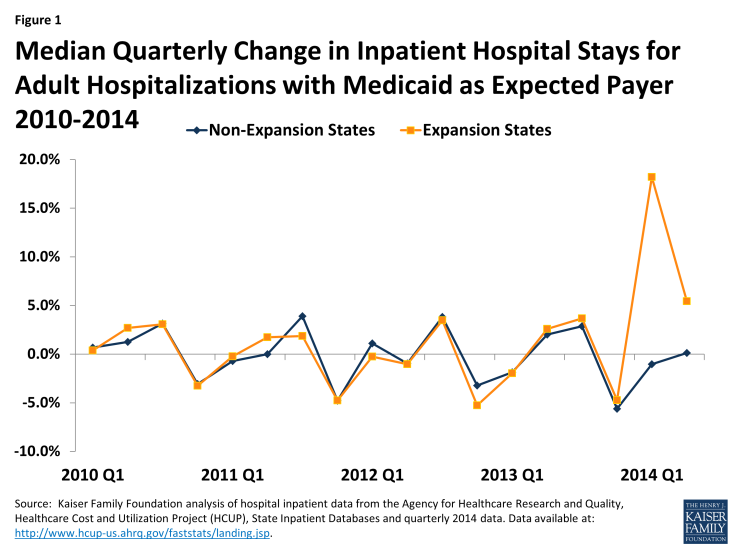 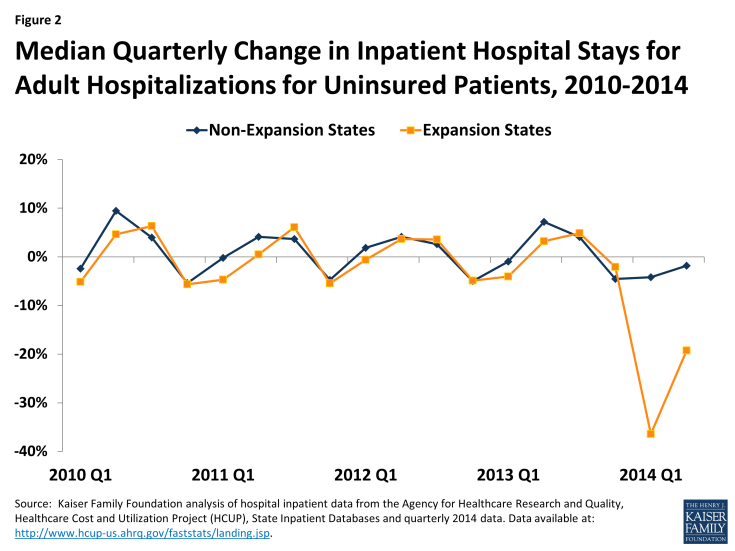 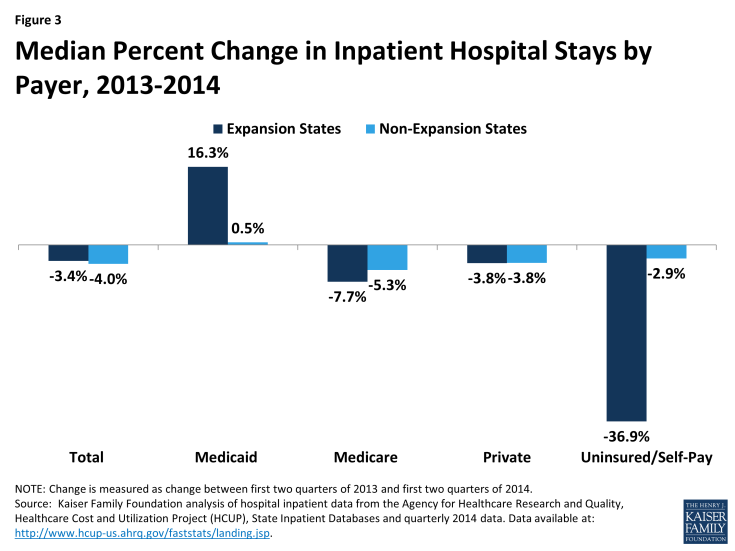 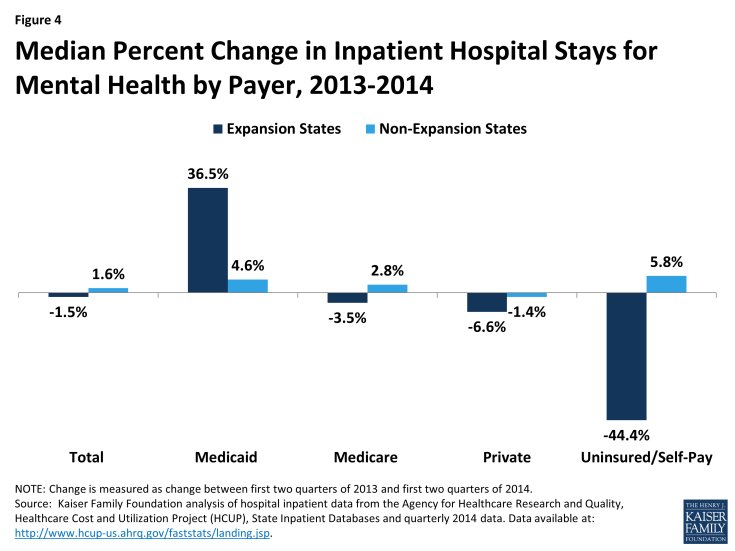 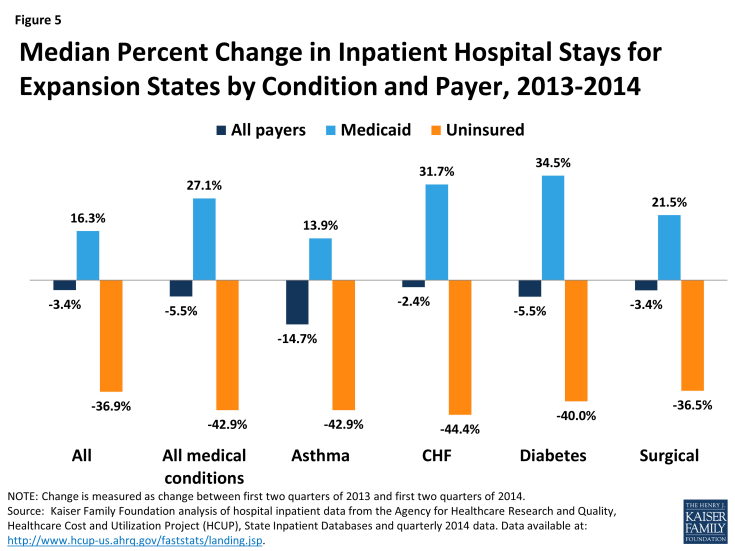 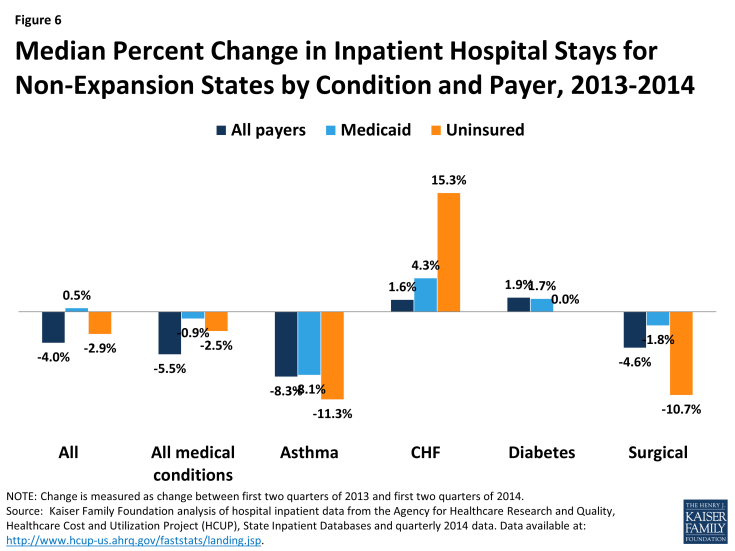 Looking ahead, changes may converge. Data for the later quarters in 2014 (not included in this analysis) show that the percent changes from quarter to quarter were not as disparate for expansion and non-expansion states as they were for the early months in 2014. This is likely because big level changes were occurring by payer when individuals changed coverage as a result of the Medicaid expansion in expansion states. Going forward, change between expansion and non-expansion states may follow similar trends as prior to the implementation of the ACA.  In addition, it will be important to assess how these changes in discharges by payer are affecting hospitals’ financial position. While hospitals in expansion states saw large shifts in payer mix between Medicaid and uninsured, most hospital discharges are covered by other payers such as Medicare or private insurance. As states and hospitals continue to report data on changes in payer mix and financial performance, we will be able to gain a fuller picture of the full impact of the ACA on providers.

This data note uses data from the Healthcare Cost and Utilization Project (HCUP) to examine changes in discharges by payer for states that did and did not implement the ACA Medicaid expansion.  HCUP consists of family of health care databases developed through a Federal-State-Industry partnership and sponsored by the Agency for Healthcare Research and Quality (AHRQ). Specifically, this analysis is based on data in the State Inpatient Databases (SID).  The data is discharge-level data for all patients treated in community, non-rehabilitation hospitals in the state and is weighted to represent all discharges in the state.  While 48 states participate in the SID, this analysis examines data from 16 states with data from 2010 through the second quarter of 2014.  The 16 states include 6 states that had not implemented (Florida, Georgia, Indiana, Missouri, Virginia, and Wisconsin) and 10 states that had implemented the Medicaid expansion (Arizona, California, Colorado, Hawaii, Iowa, Kentucky, Michigan, Minnesota, New Jersey, New York) in this time period.