Expanded health insurance coverage through the Affordable Care Act (ACA) is having a major impact on many of the nation’s hospitals through increases in the demand for care, increased patient revenues, and lower uncompensated care costs for the uninsured. In anticipation of higher revenues from patient care, the ACA calls for reductions in Medicaid Disproportionate Share Hospital (DSH) payments that support hospitals that serve a large number of Medicaid and uninsured patients to help cover the costs of uncompensated care. DSH cuts were scheduled to begin in 2014 but were delayed to FY2018. While many people are focusing on how these changes affect public hospitals and large urban safety net systems, many not-for-profit hospitals that have a strong tradition and mission of caring for underserved populations also may be affected. The size of the impact on specific hospitals will depend, among other factors, on whether hospitals are located in states that expanded Medicaid coverage through the ACA.

This report examines the early experiences with the ACA by Ascension Health, the delivery subsidiary of the nation’s largest not-for-profit health system, Ascension, which includes 131 acute-care hospitals and more than 30 senior care facilities in 23 states and the District of Columbia. Ascension is a Catholic healthcare system with service to the poor as an explicit part of their mission, providing almost $1.8 billion in care to persons living in poverty and other community benefit programs that include $600 million in direct charity care assistance to poor and uninsured patients in their 2014 fiscal year. The analysis examines changes in discharge volumes, hospital finances, and other outcomes between the last three quarters of 2013 – just before implementation of the ACA coverage expansions – and the first three quarters of 2014 (through September 30, 2014). In addition, the analysis compares changes among hospitals in states that expanded Medicaid with hospitals in states that did not expand Medicaid. Key findings include: 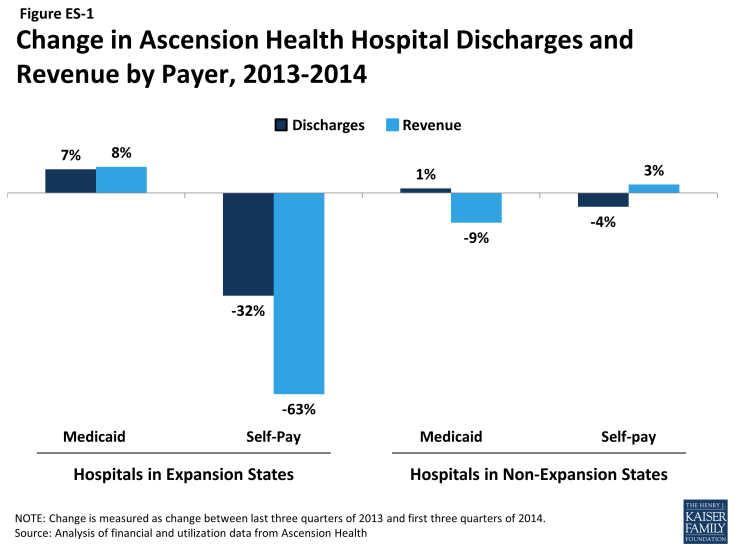