The Uninsured And The Difference Health Insurance Makes

In 2011, almost 48 million nonelderly Americans were uninsured, amidst a slow economic recovery (Fig. 1). While public insurance covers many who would otherwise be uninsured, Medicaid and the Children’s Health Insurance Program (CHIP) do not reach all of those who cannot afford insurance.  The 2010 Affordable Care Act (ACA) seeks to address the gaps in our private-public insurance system by expanding Medicaid, providing subsidized private coverage for individuals with incomes up to 400% of poverty, and reforming the health insurance marketplace. 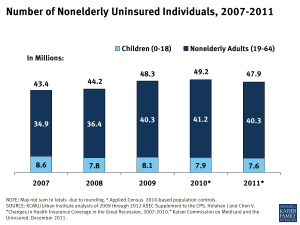 During the recession that began in 2007, millions of people—primarily adults—lost insurance coverage and joined the ranks of the uninsured. The number of uninsured declined in 2011, the first decrease in four years. Still, 18% of the nonelderly population was uninsured in 2011, which puts their health and financial security at risk.

Why Are So Many Americans Uninsured?

Health insurance is expensive, and few people can afford to buy it on their own. Most Americans obtain health insurance coverage through an employer.  However, not all workers have access to employer-sponsored coverage.  Low-income workers—those at greatest risk of being uninsured—are less likely to be offered job-based coverage and less able to afford their share of the premiums than workers with higher incomes.  The ACA includes additional employer incentives to provide affordable coverage.

Medicaid covers many low-income children, but coverage for adults is currently more limited.  Parent income eligibility levels remain very low in many states, and unless they qualify through a disability eligibility pathway, adults without dependent children are not eligible for coverage in most states, regardless of their income.  The ACA provides for an expansion of Medicaid for adults with incomes at or below 138% of poverty ($35,038 for a family of three in 2012). If all states implement the Medicaid expansion, eligibility would increase in nearly 40 states for parents and in nearly every state for other adults. If a state does not expand Medicaid, poor adult residents will be left out of coverage. 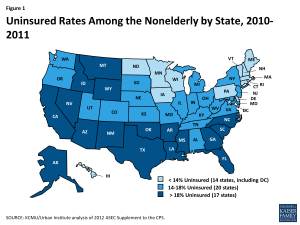 The likelihood of being uninsured varies by state because of differences in employment, income, and public insurance programs’ eligibility levels (Fig. 2). Uninsured rates vary more than four-fold across states (ranging from 5% in Massachusetts to 27% in Texas), with states in the South and West having some of the highest uninsured rates.

What Explains the Trend in the Uninsured?

The recent recession and ongoing weak job market led to a steep rise in the uninsured between 2007 and 2010. This trend was driven by a decline in employer-sponsored coverage that resulted from the high jobless rate. In January 2011, the unemployment rate was 9.1%, close to double the rate in December 2007 when the recession began.  Throughout 2011, the unemployment rate improved slightly. In the same year, the uninsured rate declined slightly, in part due to stability in employer-sponsored coverage.

Medicaid and CHIP have been crucial to preventing steeper drops in insurance coverage, as many Americans became newly eligible for these programs when their family income declined during the recession.  These programs now cover 17.6% of the population under age 65 and have been key to protecting children from the full effects of the weak economy.  The continued availability of public coverage amid these difficult fiscal times reflected provisions related to federal assistance that were continued in the ACA for states to maintain their Medicaid and CHIP eligibility levels until the broader coverage expansions go into effect.

Who Are the Uninsured? 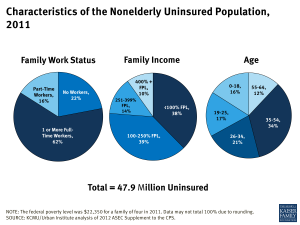 What Difference Does Health Insurance Make?

Health insurance affects access to health care as well as a person’s financial well-being.  Over half of uninsured adults have no regular source of health care to go to when they are sick.  Worried about high medical bills, they are more than twice as likely to delay or forgo needed care as the insured (Fig. 4). 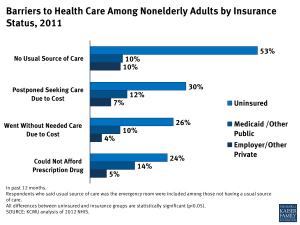 Figure 4: Barriers to Health Care Among Nonelderly Adults by Insurance 2011

The safety net of community clinics and public hospitals is unable to fully substitute for the access to care that insurance provides.   Research has established that extending coverage to the uninsured improves physical and mental health, reduces mortality rates, and ameliorates financial strain associated with health care costs.

Delaying or forgoing needed care can lead to health problems, making the uninsured more likely to be hospitalized for avoidable conditions.  The uninsured are less likely than those with insurance to receive preventive care and services for major health conditions and chronic diseases—and as a result, many suffer serious consequences.

The cost of health care has grown in the past decade, but represents a particular challenge for those without insurance. Medical bills can put great strain on the uninsured and threaten their physical and financial well-being.  Almost half of uninsured individuals reported having trouble paying medical bills, compared to less than one in four individuals with coverage. In addition, the uninsured are three times more likely than the insured to be unable to pay for basic necessities because of their medical bills.

The Uninsured and Health Reform

The ACA addresses barriers to acquiring insurance coverage through expanded access to Medicaid, subsidies for private insurance, and health insurance market reforms. The majority of the coverage expansions in the ACA will take effect in 2014, at which point, there will be a requirement that individuals have health insurance coverage. The law will also prevent insurers from rejecting individuals or charging higher premiums based on health status. By 2016, the ACA is estimated to decrease the number of uninsured by nearly half, leaving far fewer individuals facing the health and financial risks that come with being uninsured.