As part of efforts to rein in the federal budget and constrain the growth in Medicare spending, some policy leaders and experts have proposed to increase Medicare premiums and cost-sharing obligations.  Today, 54 million people ages 65 and over and younger adults with permanent disabilities rely on Medicare to help cover their health care costs.  With half of all people on Medicare having incomes of less than $23,500 in 2013, and because the need for health care increases with age, the cost of health care for the Medicare population is an important issue.1

Although Medicare helps to pay for many important health care services, including hospitalizations, physician services, and prescription drugs, people on Medicare generally pay monthly premiums for physician services (Part B) and prescription drug coverage (Part D).  Medicare has relatively high cost-sharing requirements for covered benefits and, unlike typical large employer plans, traditional Medicare does not limit beneficiaries’ annual out-of-pocket spending.  Moreover, Medicare does not cover some services and supplies that are often needed by the elderly and younger beneficiaries with disabilities—most notably, custodial long-term care services and supports, either at home or in an institution; routine dental care and dentures; routine vision care or eyeglasses; or hearing exams and hearing aids.

Many people who are covered under traditional Medicare obtain some type of private supplemental insurance (such as Medigap or employer-sponsored retiree coverage) to help cover their cost-sharing requirements.  Premiums for these policies can be costly, however, and even with supplemental insurance, beneficiaries can face out-of-pocket expenses in the form of copayments for services including physician visits and prescription drugs as well as costs for services not covered by Medicare.  Although Medicaid supplements Medicare for many low-income beneficiaries, not all beneficiaries with low incomes qualify for this additional support because they do not meet the asset test.

Because people on Medicare can face out-of-pocket costs on three fronts—cost sharing for Medicare-covered benefits, costs for non-covered services, and premiums for Medicare and supplemental coverage—it is important to take into account all of these amounts in assessing the total out-of-pocket spending burden among Medicare beneficiaries.  Our prior research documented that many beneficiaries bear a considerable burden for health care spending, even with Medicare and supplemental insurance, and that health care spending is higher among older households compared to younger households.2

The analysis is based on data from the Medicare Current Beneficiary Survey (MCBS) Cost and Use file from 2000 to 2010 (the most recent year of data available).  The dataset includes detailed information on Medicare-covered and non-covered services, utilization, and spending, including spending by Medicare, Medicaid, third-party payers, and out-of-pocket payments by beneficiaries.  The types of services included in the MCBS are dental, home health, inpatient hospital, long-term care facility, medical providers and supplies, outpatient hospital, prescription drugs, and skilled nursing facility.  The MCBS does not include spending and use for personal care services and supports, which can be a significant expense for people on Medicare who require long-term services and supports (LTSS) in the community.  Therefore, any out-of-pocket spending on personal care and support delivered in the home or the value of unpaid personal care and support services is not included in the out-of-pocket spending estimate for home health services.

The analysis excludes beneficiaries enrolled in Medicare Advantage plans, totaling 10.8 million or 22 percent of the 48.4 million Medicare beneficiaries represented in the 2010 MCBS, because the MCBS does not include reliable utilization and out-of-pocket spending data for this population, which would introduce significant bias if this population was included in the analysis.

In 2010, Medicare beneficiaries spent $4,734 out of their own pockets for health care spending, on average, including premiums for Medicare and other types of supplemental insurance and costs incurred for medical and long-term care services. 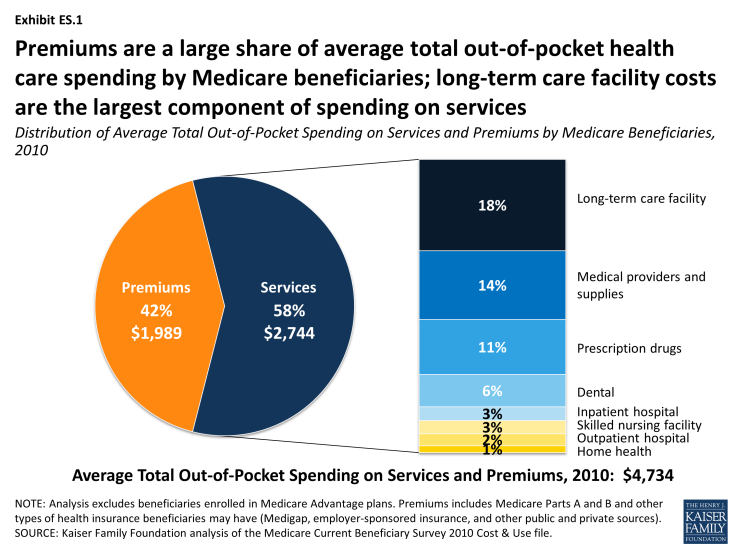 Out-of-pocket spending rises with age among beneficiaries ages 65 and older and is higher for women than men, especially among those ages 85 and older.

As might be expected, beneficiaries in poorer health, who typically need and use more medical and long-term care services, have higher out-of-pocket costs, on average.  This is the case whether measured by self-reported health status, number of chronic conditions or limitations in activities of daily living (ADLs), or use of services, such as hospitalizations, post-acute care, and long-term care.

Just as Medicare spends more on beneficiaries who use more Medicare-covered services, more extensive use of services leads to higher out-of-pocket spending.  This is especially true for beneficiaries who have multiple hospitalizations and post-acute care use and those who live in long-term care facilities.

The typical person on Medicare in 2010 paid about $4,700 out of pocket in premiums, cost sharing for Medicare-covered benefits, and costs for services not covered by Medicare.  Even with financial protections provided by Medicare and supplemental insurance, some groups of Medicare beneficiaries incurred significantly higher out-of-pocket spending than others, which could pose challenges for those living on fixed or modest incomes.  Out-of-pocket spending tends to rise with age and number of chronic conditions and functional impairments, and is greater for beneficiaries with one or more hospitalizations, particularly those who receive post-acute care.

Efforts to prevent unnecessary hospitalizations and readmissions and improve the coordination of post-acute care could not only help to reduce Medicare spending but also help to reduce out-of-pocket spending among beneficiaries with the greatest needs.  Monitoring trends in out-of-pocket spending among people on Medicare in the coming years will be important in understanding whether such efforts are making a difference.