Affording health care ranks at the top of Texans’ financial concerns, with more than half (55%) saying it is difficult for them and their families to afford health care, including a quarter (25%) who say it is “very difficult,” finds a new Kaiser Family Foundation/Episcopal Health Foundation poll of Texas residents. 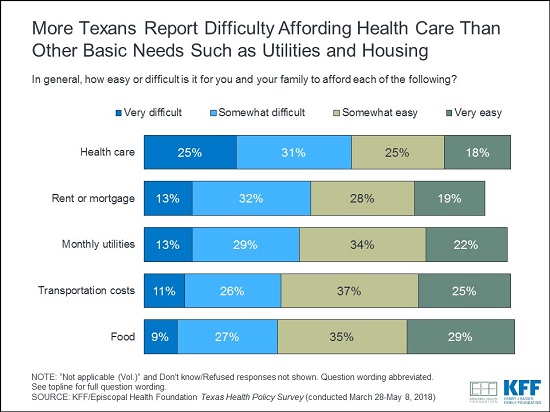 In addition, nearly four in 10 (38%) Texans say they or someone in their household had problems paying medical bills in the past year. Most of this group (and 23% of all Texans) say medical bills had a major impact on their family.

Many Texans are also skipping or postponing care due to its costs, the poll finds. Six in 10 (61%) say they or another family member has taken at least one of six such actions due to costs: skipped dental care (44%), postponed needed medical care (42%), skipped a recommended test or treatment (36%), not filled a prescription (31%), cut pills in half or skipped doses (21%), or had problems getting mental health care (14%).

“Texans said that their state government should be doing more to help many people get access to health care and these numbers show why they feel that way,” said Elena Marks, EHF’s president and CEO. A previous KFF/EHF health poll in June found that roughly two thirds of Texans say the state is not doing enough to help low-income adults get health care.

“Texans are even more likely than Americans overall to face real challenges affording health care,” KFF President and CEO Drew Altman said. “This likely reflects Texas’ uninsured rate, though the survey shows that even many residents with insurance are struggling to pay for needed care.”

Texans report many problems affording health care at a significantly higher rate than adults nationwide. For example, a recent national KFF survey found a quarter (27%) of adults report problems paying medical bills in the past year, significantly smaller than the share among Texans (38%).  Texas’ higher rates likely reflect lower average incomes and higher uninsured rates than the nation as a whole.

Among Texans, certain groups are more likely than others to report difficulty in all of these areas. Those with lower incomes, Hispanic residents, and those in poorer health are more likely to report experiencing these types of problems compared to their higher-income, white, and healthier counterparts. 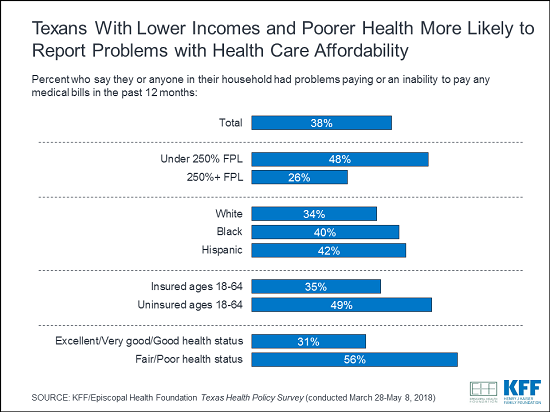 Not surprisingly, uninsured Texans report much higher rates of difficulties affording health care, paying medical bills and postponing or skipping needed care than Texans with insurance. Texas currently has more residents without health insurance than any other state and has the highest uninsured rate in the country (21% among adults ages 19-64, compared to 12% nationally).

Cost is the main obstacle to getting more Texans insured. Half (50%) of non-elderly uninsured Texans say that the main reason they don’t have coverage is because it is too expensive and unaffordable. Far fewer cite other main reasons such as employment issues (15%), not wanting or needing it (7%) or citizenship/residency issues (7%).

The poll also examines Texans’ experiences accessing medical care.  One in five (21%) say they don’t have a place where they usually go for care when they are sick or need health advice, and another 5 percent say they usually go to the emergency room. Others usually visit a doctor’s office (44%), a clinic or health center (20%) or another location such an urgent care or hospital outpatient center (9%).

The findings come from the second report in a series based on a KFF/EHF survey of Texans. The first report captured residents’ views of and experiences around state health policy and Medicaid.

Designed and analyzed by researchers at the Kaiser Family Foundation and the Episcopal Health Foundation, the Texas Health Policy Survey was conducted from March 28-May 8, 2018 among a random digit dial telephone sample of 1,367 adults living in Texas. Interviews were conducted in English and Spanish by landline (439) and cell phone (928). The margin of sampling error including the design effect for the full sample is plus or minus 3 percentage points. For results based on subgroups, the margin of sampling error may be higher.