Poll Finds Nearly Three Quarters of Americans Say Prescription Drug Costs Are Unreasonable, and Most Blame Drug Makers Rather Than Insurers for the Problem

If Supreme Court’s King v. Burwell Decision Restricts Insurance Subsidies to Certain States, Most Say Congress Should Act to Ensure Residents of All States are Eligible, and a Majority in Potentially Affected States say Their State Should Act

Public’s Views on Affordable Care Act Are Divided and Unchanged: 42% Unfavorable and 39% Favorable

The new poll probes the public’s views and experiences on prescription drug costs in depth, building on the results of our April poll that identified high drug costs as the public’s top health care priority for the President and Congress.

About three-quarters (76%) of those who say costs are unreasonable say that it is more because pharmaceutical companies set the drug prices too high, while just 10 percent say it is more because the health insurance companies require people to pay too much of the cost for drugs. Another 10 percent volunteered that both are to blame. 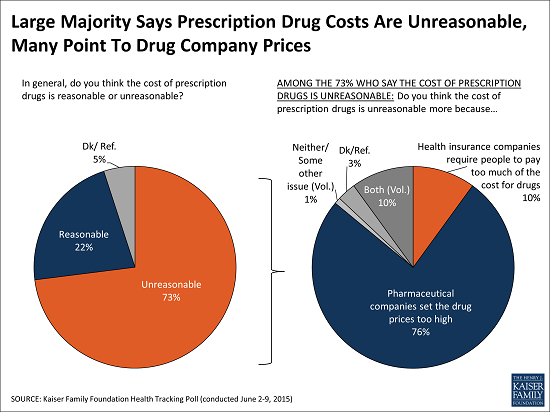 The public cites drug company profits as the number one reason for the high cost of prescription drugs (picked by 77%), followed by the cost of medical research (64%), the cost of marketing and advertising (54%), and the cost of lawsuits against pharmaceutical companies (49%).

With the Supreme Court expected to rule by the end of the month in the King v. Burwell case challenging a key aspect of the Affordable Care Act (ACA), the public is still not focused on the case. Most say they have heard only a little (28%) or nothing at all (44%) about it. Relatively few say they have heard something (14%) or a lot (13%) about the case.

When asked how Congress should respond if the Court prohibits that financial assistance in federal marketplace states, more than six in 10 (63%) say Congress should pass a law to ensure people in all states are eligible for subsidies. Majorities of Democrats (80%) and independents (66%) favor Congressional action, while Republicans are divided with half (49%) saying Congress should not pass a law and somewhat fewer (38%) favoring action. 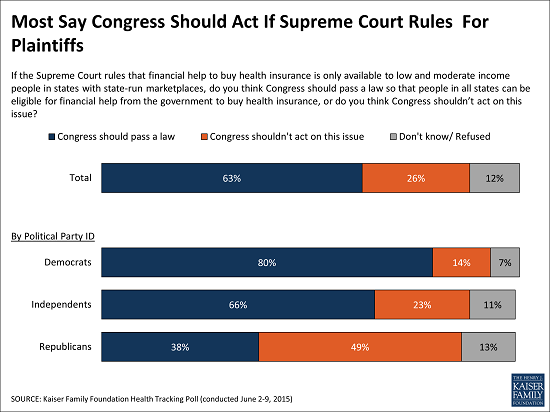 Among those in the potentially affected states, most (55%) say their state should act to create their own marketplace if necessary to assure their residents of continued financial assistance.

On the ACA overall, the poll finds the public remains closely divided, with 42 percent reporting an unfavorable view of the law and 39 percent reporting a favorable view, statistically unchanged from when we last asked the question in April.  That narrow gap is consistent with the split in recent months, as is the large partisan divide behind it.  Most Republicans continue to hold unfavorable views, most Democrats hold favorable ones, and independents fall somewhere in the middle.

The poll was designed and analyzed by public opinion researchers at the Kaiser Family Foundation and was conducted from June 2-9, 2015 among a nationally representative random digit dial telephone sample of 1,200 adults. Interviews were conducted in English and Spanish by landline (480) and cell phone (720). The margin of sampling error is plus or minus 3 percentage points for the full sample. For results based on other subgroups, the margin of sampling error may be higher.