Large Majorities Favor Wide Range of Policy Changes to Curb Prescription Drug Costs, Including Those That Give Government a Greater Role in Negotiating or Limiting Prices

Public Split on Whether ACA Marketplace in Their Own States Are Working Well; Just One in Four Aware the Nation’s Uninsured Rate Reached an All-Time Low

Amid news reports about increases in the price for EpiPen and other drugs, the vast majority of Americans – including majorities of Democrats, Republicans and independents – support several policy changes to control the cost of prescription drugs, including some that would expand government’s role in drug pricing, the latest Kaiser Family Foundation tracking poll finds.

About eight in 10 Americans say they favor allowing the federal government to negotiate with drug companies to get a lower price on medications for people on Medicare (82%) and limiting the amount drug companies can charge for high-cost drugs for illnesses like hepatitis or cancer (78%). In addition, two-thirds (66%) favor creating an independent group that oversees the pricing of prescription drugs, as Democratic presidential candidate Hillary Clinton recently proposed.  Majorities also support requiring drug companies to release information to the public on how they set drug prices (86%) and allowing Americans to buy prescription drugs imported from Canada (71%).

A majority of Democrats, Republicans and independents support each of these five policy changes and also think each of them would be effective in keeping drug costs down.

Fewer overall and across parties favor two other potential policy changes: eliminating drug advertisements (47%) and encouraging consumers to buy lower-cost drugs by requiring them to pay more for similar but higher-cost ones (42%). 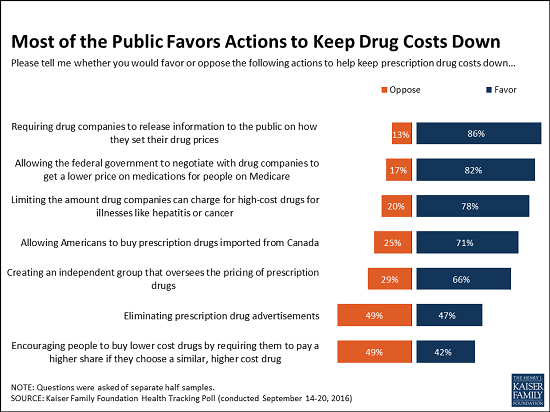 The survey probes the public’s views and experiences with prescription drugs more broadly. It finds a large majority (77%) perceive drug costs as unreasonable, while one in five (21%) say they are reasonable. The share who say drug costs are unreasonable is up somewhat from 72 percent a year ago in August 2015.

At the same time, relatively few Americans say they personally are having trouble paying for their medication. The survey finds about half (55%) of the public report currently taking prescription drugs, and the vast majority (73%) of them say paying for their medications is easy; far fewer (26% of those taking prescription drugs, or 14% of the total population) say it is difficult to pay for their drugs. Larger shares of those who report being in “fair” or “poor” health and those taking four or more medications say it is difficult to afford their prescriptions.

The survey finds the public remains divided in its view of the Affordable Care Act (ACA), with 47 percent reporting an unfavorable view and 44 percent reporting a favorable one.  As in the past, Democrats largely support the law, Republicans largely oppose it, and independents are in the middle, though leaning unfavorable. These divisions persist on other questions about views and facts related to the law’s impact.

Designed and analyzed by public opinion researchers at the Kaiser Family Foundation, the poll was conducted from September 14-20 among a nationally representative random digit dial telephone sample of 1,204 adults. Interviews were conducted in English and Spanish by landline (421) and cell phone (783). The margin of sampling error is plus or minus 3 percentage points for the full sample. For results based on subgroups, the margin of sampling error may be higher.