Six Months ahead of the Midterm Elections, Democratic and Republican Voters’ Views about President Trump Outweigh their Views on Issues, Including Health Care

Who are the “Health Care Voters”? Mostly Women, and Mostly Planning to Vote Democratic

As primary season for the 2018 midterm elections heats up, the latest Kaiser Family Foundation poll suggests the elections are shaping up more as a referendum on President Trump than on health care or any other issue.

At the same time, when asked what issue they want to hear the 2018 candidates discuss on the campaign trail, health care ranks among the top issues for voters, particularly Democrats.

For Republicans, health care (15%) ranks fourth behind the economy and jobs (24%), immigration (22%) and gun policy (19%), and similar to immigration (14%) and tax cuts and tax reform (14%). The relatively low ranking suggests health care may plan a less prominent role in Republican campaigns compared to the past four election cycles, when Republicans often focused on their opposition to the 2010 Affordable Care Act. 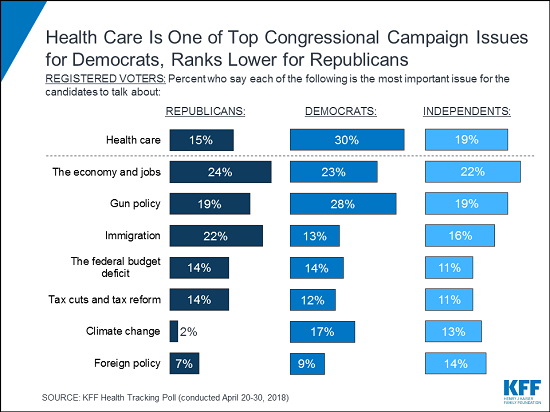 Among Health Care Issues, Voters are Most Focused on Lowering their Costs, Including Drug Prices

Other issues – including supporting the ACA, repealing the ACA or supporting a national health plan – split partisans, with Democrats and Republicans on opposite sides. 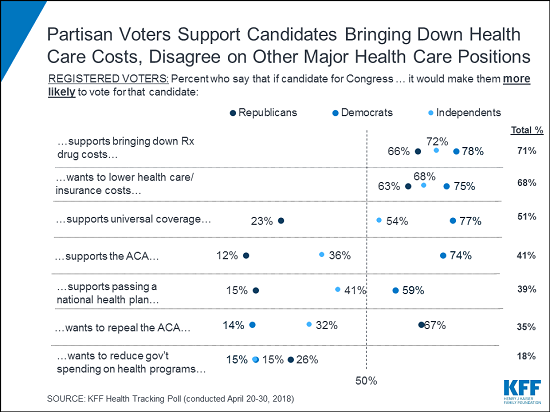 Who are the Health Care Voters?

The new survey also takes a deeper look at those voters who say health care will be a “most important factor” to their vote in the 2018 Congressional elections – nearly a quarter (23%) of all voters. Over the next six months, we will be tracking what is driving this group of health care voters.

Designed and analyzed by public opinion researchers at the Kaiser Family Foundation, the poll was conducted from April 20-30, 2018 among a nationally representative random digit dial telephone sample of 2,000 adults. Interviews were conducted in English and Spanish by landline (699) and cell phone (1,301). The margin of sampling error is plus or minus 3 percentage points for the full sample. For results based on subgroups, the margin of sampling error may be higher.