On That Date, Health Spending for People in Employer Plans Will Exceed Average Deductibles

Deductible Relief Day is May 19.

That’s the date by which average spending for people with employer-sponsored health insurance is sufficient to satisfy the average deductible, the amount they must pay out-of-pocket for most health care services before their insurance plan kicks in to help pay the bills, KFF analysts explain in a new analysis.

If you have not heard of Deductible Relief Day before, that is because we just invented it. But the issue it illuminates is real and represents a growing cost to consumers as deductibles have risen in recent years and become an increasingly prominent feature of employer health plans.

The analysis documents that: 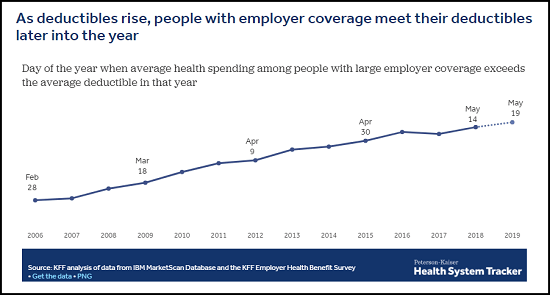 As deductibles rise and become more common, it takes longer for people with employer coverage to satisfy their deductibles each year and begin benefiting more fully from the financial protection of their health plan. May 19 is Deductible Relief Day this year, but ten years ago, when deductibles were smaller and less prevalent, it fell on March 18, 2009. While health care costs have increased over time, deductibles have increased even more.

Since some enrollees do not have enough savings or discretionary income to be able to pay a typical deductible, these costs, which tend to be concentrated when an enrollee uses services, can lead people to delay care or struggle to pay medical bills. They also often face additional out-of-pocket costs even after meeting their deductible. Such costs include copays, a fixed amount patients must pay when visiting the doctor or receiving a medical service, and coinsurance, the portion of a medical bill the consumer is required to pay while the insurer pays the rest.

The analysis is part of the Peterson-Kaiser Health System Tracker, an online information hub dedicated to monitoring and assessing the performance of the U.S. health system.