Given recent news about some high-cost prescription drugs and the debate about who should pay for them, this month’s Kaiser Health Tracking Poll has a special focus on the issue. Nearly three-quarters of the public think that the cost of prescription drugs is unreasonable. Americans place much of the blame with the drug companies saying they set prices too high and that company profits are a major factor in drug pricing. About half say there isn’t enough government regulation limiting the price of prescription medicines and 12 percent say there is too much. Overall, half of the public reports currently taking a prescription medicine, with about 1 in 5 of them saying they or a family member have skipped doses or cut pills in half due to cost or that they have a hard time affording them– rising to about a third among those with lower incomes. Asked about who should pay for high drug costs, about 7 in 10 of the public says health insurance should always pay if no lower-cost alternative exists, even if it leads to higher premiums for others. However, a majority says that insurance should only pay if the drug has been proven more effective than existing treatments.

The poll also finds that most of the public still hasn’t heard much about the Supreme Court case on whether people in states with federal marketplaces are eligible for financial assistance to purchase health insurance. Most feel that Congress and states should act if the Court rules for the plaintiffs, but there is no agreement among partisans. Opinion on the law overall remains divided, with 42 percent of the public reporting an unfavorable view and 39 percent reporting a favorable one, statistically unchanged from when we last asked the question in April.

A Focus On Prescription Drugs

In April, when asked about their health care priorities for the President and Congress going forward, majorities of the public reported that lowering drug prices and making sure expensive drugs are available to those who need them should be top priorities. This month we found that nearly three-quarters of the public (73 percent) think that the cost of prescription drugs is unreasonable. This sentiment is held both by those who are currently taking prescription drugs and those who are not (74 percent and 72 percent).

About three-quarters (76 percent) of those who say costs are unreasonable say that it is more because pharmaceutical companies set the drug prices too high, while just 10 percent say it is more because the health insurance companies require people to pay too much of the cost for drugs. 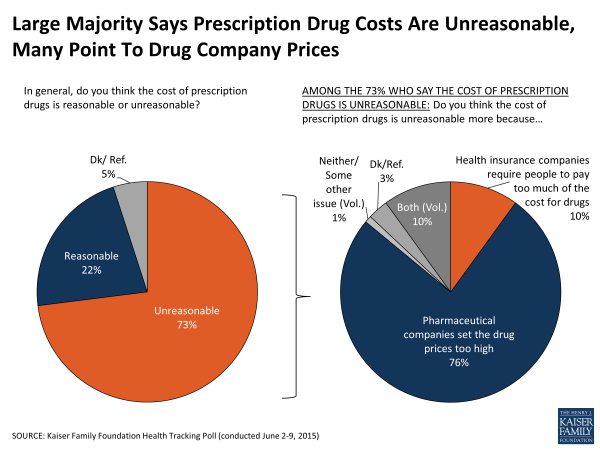 Looking at what people feel are the major factors contributing to the price of prescription drugs, the number one reason cited by the public was drug company profits, picked by 77 percent of the public. Significant shares also say that the cost of medical research (64 percent), the cost of marketing and advertising (54 percent), and the cost of lawsuits against pharmaceutical companies (49 percent) are major factors. 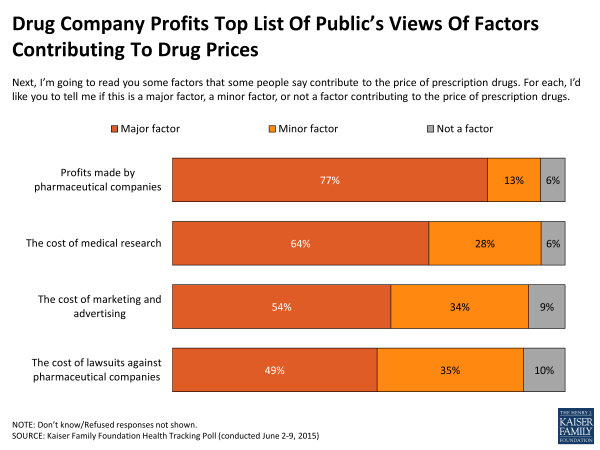 Recently there has been some news coverage and debate about who is responsible for paying for high-cost drugs – insurers or individuals themselves. About 7 in 10 (71 percent) of the public says that health insurance should always pay for an expensive new drug recommended by a doctor when no lower-cost alternative exists, even if it eventually leads to higher premiums for everyone and only 17 percent said that the individuals who need the drug should be required to cover all or most of the cost themselves. However, about 6 in 10 (58 percent) say that health insurance companies should only pay for an expensive new drug if it has been proven more effective than existing treatments, while 37 percent say they should always pay for it. 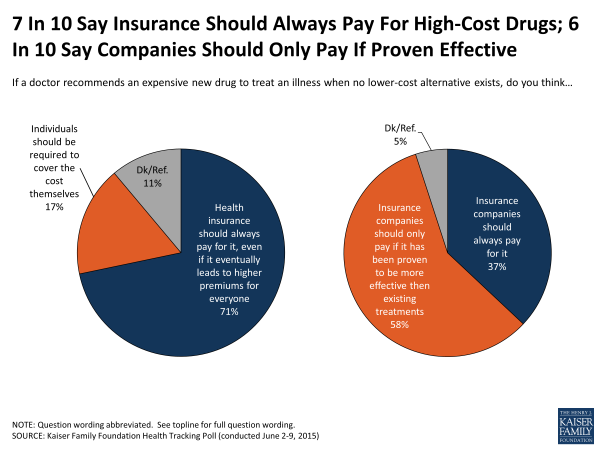 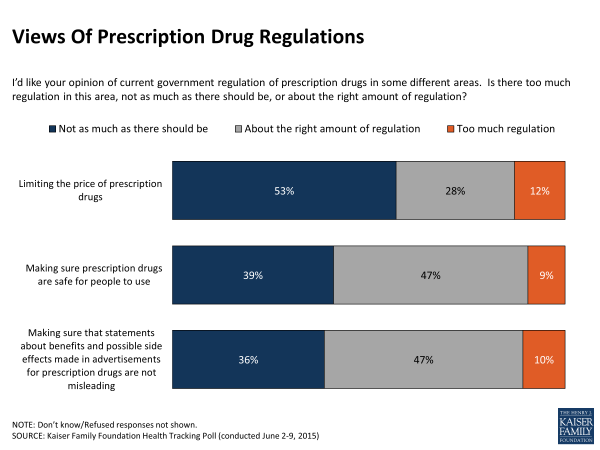 The issue of drug costs is personal to many Americans, as half say they currently take prescription medicine. Of those who report currently taking prescription drugs, a majority (76 percent) say it is easy to afford to pay the cost of their medicine, but about 2 in 10 (21 percent) say it is difficult; a share rises to about a third (34 percent) among those with lower incomes. As a result of the cost of their medicine, 25 percent of those currently taking prescription medicine report they or a family member have not filled a prescription in the past 12 months and 18 percent report cutting pills in half or skipping doses of medicine. 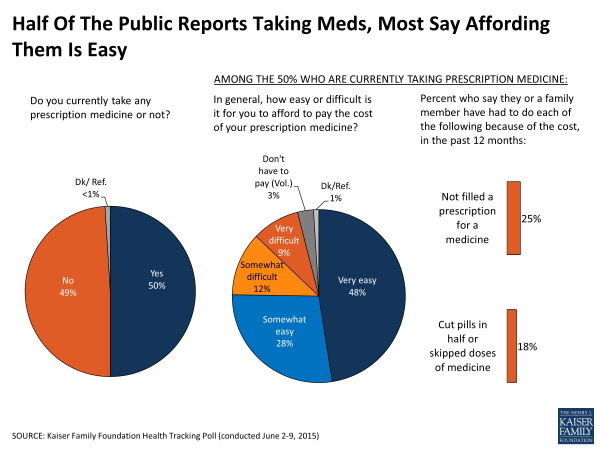 Public Opinion On The Eve Of The Supreme Court Decision 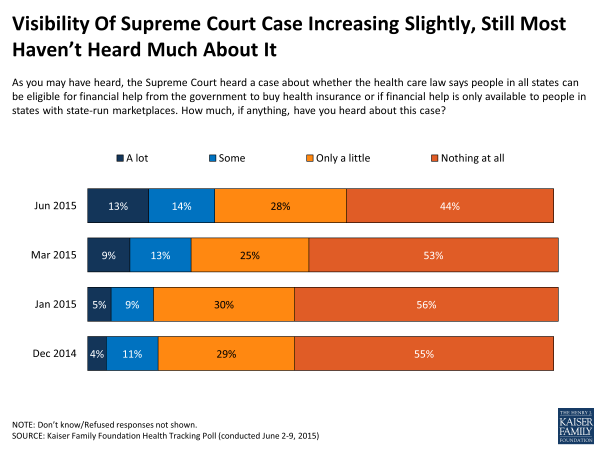 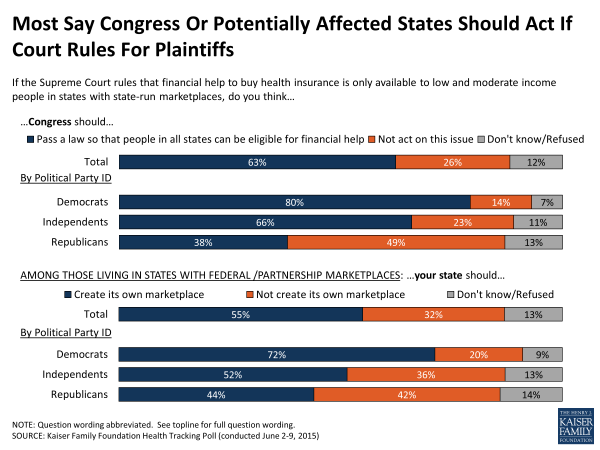 Opinion Of The Affordable Care Act

This month, opinion on the health care law remains closely divided with 42 percent of the public reporting an unfavorable view and 39 percent reporting a favorable view, statistically unchanged from when we last asked the question in April.  These shares are similar to what we’ve seen in public opinion of the law since it narrowed earlier this year. 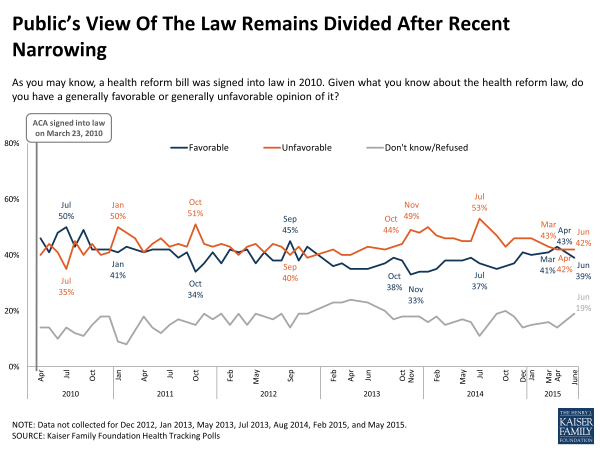 The Supreme Court ruling later this month and the upcoming 2016 Presidential elections will likely renew attention to the ACA, and, at this point, the public at large is divided about whether the debate over the health care law should continue or if it’s time the country focused more on other issues. About half (49 percent) say they think it’s important for debate to continue, while 45 percent say they are tired of it and it’s time to move on. These shares are similar across political parties. 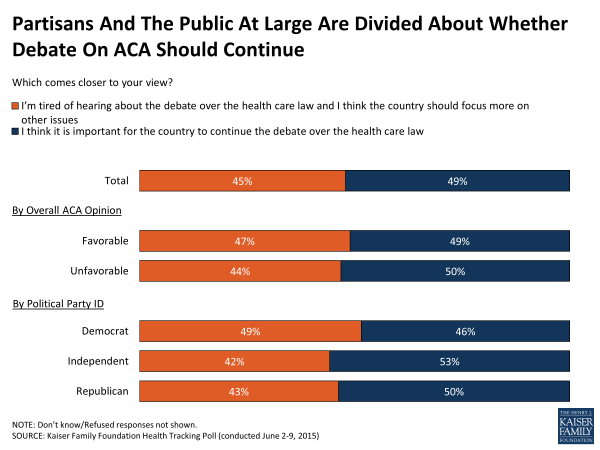 This month’s Kaiser Health Policy News Index continues to find media coverage of police-related issues and coverage of conflicts involving ISIS at the top of the public’s radar. Over two-thirds say they “very” or “fairly” closely followed stories about conflicts involving ISIS and other Islamic militant groups in Iraq and Syria (69 percent) and the six Baltimore police officers indicted in the death of Freddie Gray (68 percent). In other national news, 56 percent of the public reports already closely following the 2016 presidential campaigns and a ruling that it is illegal for the National Security Agency to collect large amounts of Americans’ calling records (50 percent). All of the health policy stories fell below the 50 percent mark this month, with the most closely followed of these health stories being news about a bill passed by the House of Representatives banning abortions after 20 weeks of pregnancy (39 percent). Less than 2 in 10 say they closely following the controversy over an expensive new drug to treat hepatitis C (17 percent) and Indiana’s new law permitting a needle exchange program in response to an HIV outbreak (16 percent); fewer than the shares who report following other news coverage like the FIFA officials indicted for corruptions charges (36 percent) and the Republican budget passed by the Senate (29 percent). 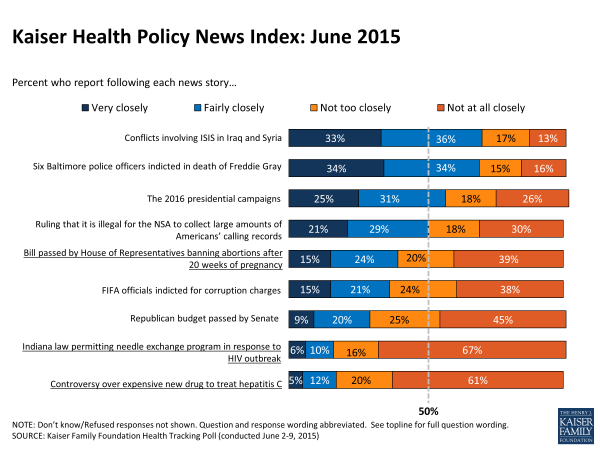