Various market watchers have reported that the use of health care services has not been growing recently as it had in the past, resulting in lower than expected health care claims for people with private insurance and higher than expected earnings for insurers. A look at physician office visits by nonelderly patients with private insurance over the past decade illustrates the change in the use of services (See the chart below). (This analysis was prepared for the Kaiser Family Foundation by researchers at Stanford University using physician utilization data collected by IMS Health.) 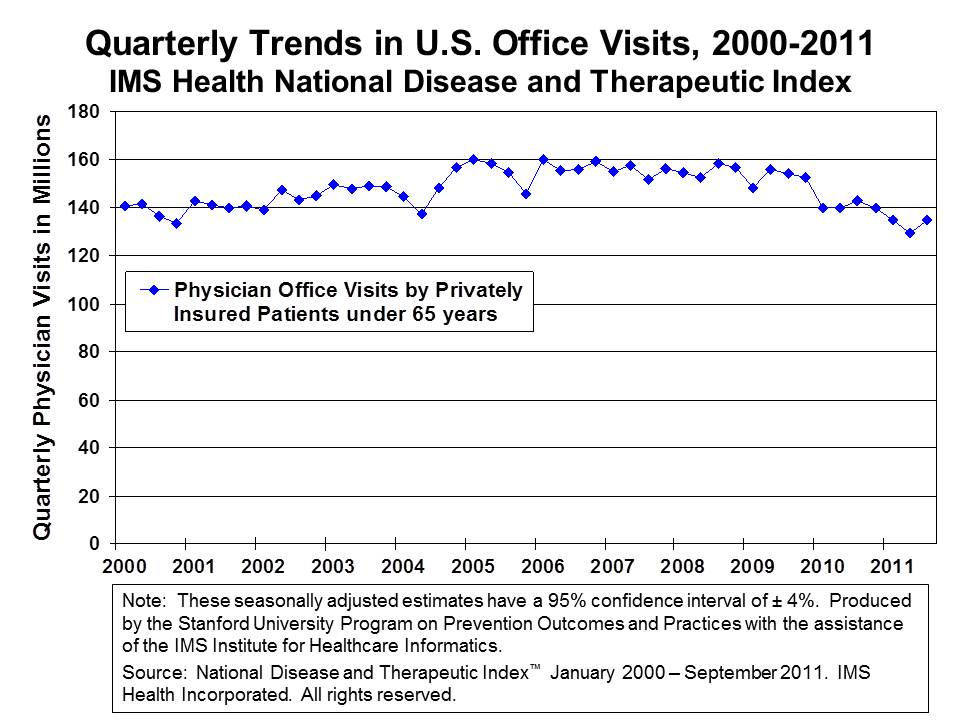 Although the total number of visits jumps around somewhat from quarter to quarter, the analysis shows generally that the quarterly number of office visits by privately insured patients increased from about 140 million visits per quarter at the beginning of the decade to 160 million visits early in 2005. The number of non-elderly people with private insurance changed hardly at all over that period, increasing by about 1% according to our analysis of the National Health Interview survey. So, the increase was driven by people with private insurance going to the doctor more often.

From 2005 through 2008, the trend in physician visits was largely flat as the number of people with private insurance dropped slightly (about 1.7%).

Then, as the economic downturn deepened, the number of physician visits among the privately insured started a downward trend, which has continued even as the recession technically ended in June of 2009. The number of visits fell to a low of 129 million in the 2nd quarter of 2011, a decline of 17% from 156 million visits in the 2nd quarter of 2009. The number of people with private insurance declined over this period as well as many people lost their jobs and their insurance along with them. But, the decline in the number of people with private insurance is much smaller than the decline in visits – about 2% between 2009 and 2010. And it looks like private insurance enrollment may be increasing into 2011.

Even people who are insured are going to the doctor less. Likely, consumers are reacting to the severe economic downturn and significant job-loss which has defined the economy over the last several years by cutting back on health spending. Higher deductibles, copays and coinsurance increase the cost of care, and their impact may be magnified in these tough economic times. The Kaiser/HRET Annual Survey of Employer Health Benefits finds that the share of workers covered on the job by plans with a deductible of at least $1,000 grew from 18% in 2008 to 31% this year. In some cases people may be foregoing unnecessary care, meaning that health costs are reduced with little or no effect on health. In other cases people are likely cutting back on necessary care, potentially endangering patients’ longer term health and leading to higher costs over time.

The drop in medical service use poses somewhat of a dilemma for insurers, their customers, and regulators. As the economy recovers, service use will probably begin to increase, but when that will happen and by how much it will increase will be difficult to predict. The data show a slight uptick in physician use by the privately insured in the 3rd quarter of 2011, but the change was not statistically significant and there’s no way of knowing whether it’s the beginning of a trend. It could also simply be that more people are now insured. Insurers will want to protect themselves against an upswing in service use by building higher trends into their rate projections, but purchasers and regulators may push back, claiming that insurer projections are not in sync with recent experience. In fact, reports suggest that insurers have profited this year after raising premiums with the expectation of higher utilization that never materialized.

Two provisions of the Affordable Care Act may come into play here. States and the federal government are now reviewing premium increases of more than 10% to determine if they are justified. This process provides some insights into what insurers are assuming for the future, and an opportunity for regulators to challenge those assumptions. And, insurers are now required to give small businesses and individuals rebates if their medical loss ratios (the share of premium dollars going to medical claims) are below certain thresholds. If insurers project bigger increases in health care use than actually occur, they may find themselves giving money back to consumers.

—Gary Claxton and Larry Levitt. Analysis of the physician utilization data was prepared for Kaiser by Randall Stafford and Laurence Baker of Stanford University.