Low-Income, Hourly and Contract Workers are Most Likely to Worry About Lost Income and Putting Themselves at Risk by Going to Work

In the midst of a sweeping national health and economic crisis sparked by the novel coronavirus pandemic, a new KFF coronavirus poll finds two thirds of the public (67%) say they are taking precautions as a result, and large shares worry about its impact on their family’s health and finances.

This includes four in 10 who changed travel plans (42%) or canceled plans to attend large gatherings (40%), and about a third who stocked up on food or supplies (35%). In addition, a quarter (26%) report staying home from work, school or other regular activities, while one in eight (12%) say they bought or wore a protective mask.

Though older people and those who live in a household where someone has a serious health condition are at greater risk of developing complications if they are infected with coronavirus, they are no more likely to report taking these steps.

KFF will continue to track the public’s views and experiences with the coronavirus as the situation evolves in the coming weeks and months. 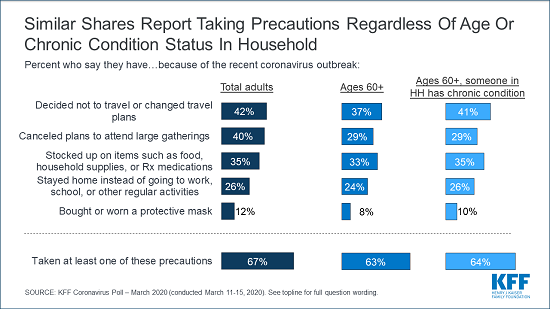 “For many workers, the coronavirus pandemic is both a health and economic threat,” KFF President and CEO Drew Altman said. “Many workers – including health care workers – worry they’ll put themselves at risk because they can’t afford not to go to work. Low-wage, hourly and gig workers also have legitimate concerns about losing income as many businesses scale back or shut down.”

Fielded from March 11-15 as many schools closed and authorities moved to discourage or prohibit large public gatherings to slow the virus’ spread, the KFF coronavirus poll provides a snapshot of the public’s experience, knowledge and views during the rapidly unfolding crisis.

The poll finds about half of workers (53%) say they are worried they will lose income due to a workplace closure or reduced hours, and four in 10 (41%) worry that they will put themselves at risk of exposure to coronavirus because they cannot afford to stay home and miss work. Among those who say they or someone in their household works to provide health care services, 40% say they worry about putting themselves at risk.

Work-related worries significantly vary based on people’s work situations. For example, nearly three quarters (73%) of workers in households with annual incomes under $40,000, two-thirds of part-time workers (68%), and six in 10 of those who are paid hourly (60%) or by the job (61%) worry about lost income.

The pattern is similar for worries about risking infection because they can’t afford to miss work. Workers in low-income households and those who work part-time and are paid hourly or by the job are more likely than others to report being worried about putting themselves at risk.

The House on Saturday passed legislation endorsed by President Trump that would expand paid sick leave and family leave for workers affected by the ongoing crisis.

The poll finds about a third (32%) of workers report that they do not get paid sick leave from their employers, and half (51%) do not get paid time off for family or medical leave. Those who work part-time, workers who are paid hourly or by the job, and those with lower incomes are much less likely to report having paid leave of any type.

Overall 10% of workers say they already have lost income from a job or business because of the crisis. This includes roughly at least one in five who are self-employed (23%) or get paid by the job (21%).

About six in 10 (62%) of the public overall worry that they or a family member will get sick from the coronavirus. Parents (68%) and those with low household incomes (68%) are among the groups most likely to worry about a family member getting sick.

Amid a steep drop in the stock market in recent weeks, about half (51%) of the public also says they worry about the crisis’ impact on their retirement and college savings. More than a third (36%), including two-thirds (66%) of adults under age 65 without health insurance, worry about being able to afford tests and treatment for coronavirus if they need it.

Overall, about a third of adults (32%) say that worry and stress related to coronavirus has had a negative impact on their mental health, including 14% who say it has had a “major” impact.

Democrats and Republicans are Reacting to the Crisis Differently

Across many questions, the poll finds significant partisan differences, with Democrats generally more worried about the health and economic consequences and more likely to take specific actions in response.

For example, nearly three-quarters of Democrats (73%) but only half of Republican (50%) worry that they or a family member will get sick.  Democrats also are twice as likely as Republicans (54% vs. 27%) to worry about losing income due to workplace closures or reduced hours.

Similarly, Democrats are much more likely than Republicans to say they changed travel plans (53% vs. 29%) or cancelled plans to attend large gatherings (49% vs. 28%).

The poll finds overwhelming majorities know that frequent handwashing, staying home if you are sick, and avoiding large gatherings are recommended by public health experts as a way to help slow the spread of coronavirus. The vast majority also know that adults ages 60 or older and those with pre-existing medical conditions are at a higher risk of developing serious complications.

Designed and analyzed by public opinion researchers at KFF, the poll was conducted March 11-15, 2020 among a nationally representative random digit dial telephone sample of 1,216. Interviews were conducted in English and Spanish by landline (246) and cell phone (970). The margin of sampling error is plus or minus 3 percentage points for the full sample. For results based on subgroups, the margin of sampling error may be higher.