A new Kaiser Family Foundation survey about the U.S. role in global health finds the public puts meeting basic needs such as improving access to clean water and food and helping children at the top of the priority list for U.S. global health spending. Addressing the Ebola outbreak in West Africa is also a top priority. Some high profile issues such as malaria and reproductive health rank further down the list.

About 7 in 10 Americans say U.S. spending to improve health in developing countries helps protect Americans by preventing the spread of diseases like Ebola, and nearly 6 in 10 think this spending helps improve the U.S. image around the world. Fewer Americans say spending on global health helps U.S. national security (37%) or the U.S. economy (36%). 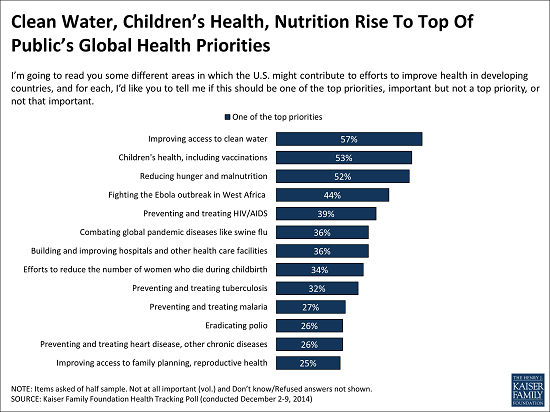 Most Americans overestimate the share of the U.S. budget spent on foreign aid, with the public estimating on average that 26 percent of the federal budget is spent on foreign aid, according to the Foundation’s latest polling data from December. The correct answer is 1 percent or less of the federal budget. After hearing how much the U.S. actually spends on foreign aid, the share of the public saying the U.S. spends too much on foreign aid drops in half from 56 percent to 28 percent. In December, after the survey had been administered, Congress approved $5.4 billion in appropriations for Ebola and global health security efforts internationally and in the United States.

The Kaiser Health Policy News Index, our regular tracking poll of the news stories Americans are following most closely, finds that coverage of the Ebola virus in the U.S. and West Africa ranked as the top health news stories of 2014. Attention to this story grew throughout the fall, and at least three-quarters of Americans said they closely followed news coverage of Ebola in November and December. Forty-one percent of Americans said in December that they think the Ebola outbreak in West Africa is under control — up from only 10 percent who thought the epidemic was under control in October.

The Kaiser Family Foundation has tracked public opinion on global health in-depth since 2009. Data Note: Americans’ Views on the U.S. Role in Global Health provides an update of the public’s views on key questions, particularly their attitudes and knowledge of global health policy in the context of federal budget discussions.