Workers Are More Likely to Get a COVID-19 Vaccine When Their Employers Encourage It and Provide Paid Sick Leave, Though Most Workers Don’t Want Their Employers to Require It

A Third of Parents with Kids Ages 12-17 Report Their Kids Are Now Vaccinated; Most Parents Oppose Mandatory Vaccinations for School Children

As more employers return to in-person work, the latest KFF COVID-19 Vaccine Monitor report shows that workers are more likely to have gotten a COVID-19 vaccine when their employer encourages it or provides paid sick leave to get the vaccine and recover from side effects.

Those actions appear to have an effect: About three-quarters of workers whose employers encourage getting a vaccine (73%) or offer paid time off to do so (75%) say the have gotten at least one shot, significantly more than the shares whose employers don’t encourage vaccination (41%) or don’t offer paid time off (51%). The differences persist even after controlling for workers’ age, race and ethnicity, education, income, party identification and other demographic characteristics.

Relatively few workers say that their employer required them (9%) or offered a cash bonus or other incentive (12%) to get a vaccine. 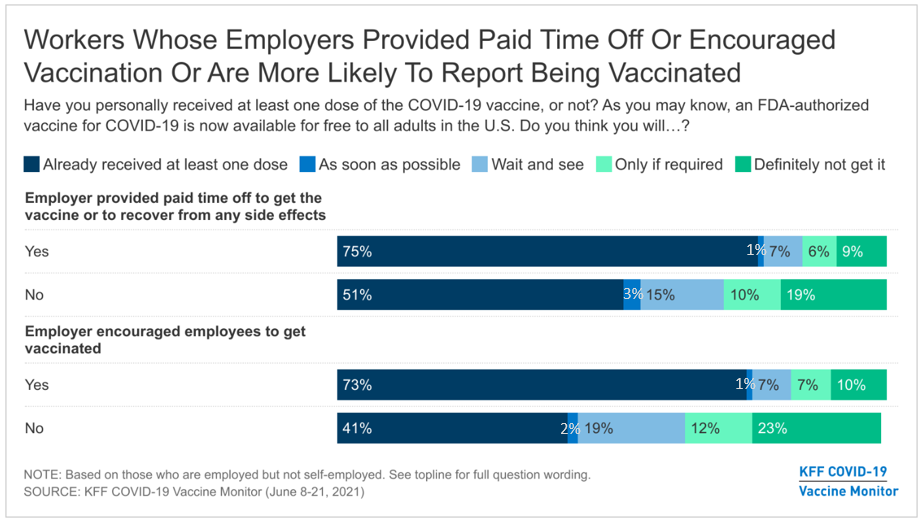 While the public overall is split on whether employers should require workers to get vaccinated unless they have a medical excuse (51% favor, 46% oppose), most workers (61%) say they do not want their own employer to require vaccinations. Opposition is especially high among workers who are not yet vaccinated (92% oppose a mandate) and among those who identify as or lean Republican (85%).

“Getting more Americans vaccinated isn’t only up to the government. Even without requiring workers to get a vaccine, employers can play a role by offering paid time off to get vaccinated and encouraging their workers to do so,” KFF President and CEO Drew Altman said.

Overall, nearly two-thirds (65%) of adults report having gotten at least one dose of a COVID-19 vaccine, up only slightly since May (62%). An additional 3% say they want to get a vaccine as soon as they can, and one in ten (10%) say they want to “wait and see” how the vaccine works for others before getting it.

About a fifth of the public remains in the more resistant categories, saying they that would get a vaccine “only if required” for work, school or other activities (6%), or that they will “definitely not” get a vaccine (14%). These shares are essentially unchanged since January even as most other adults got vaccinated. 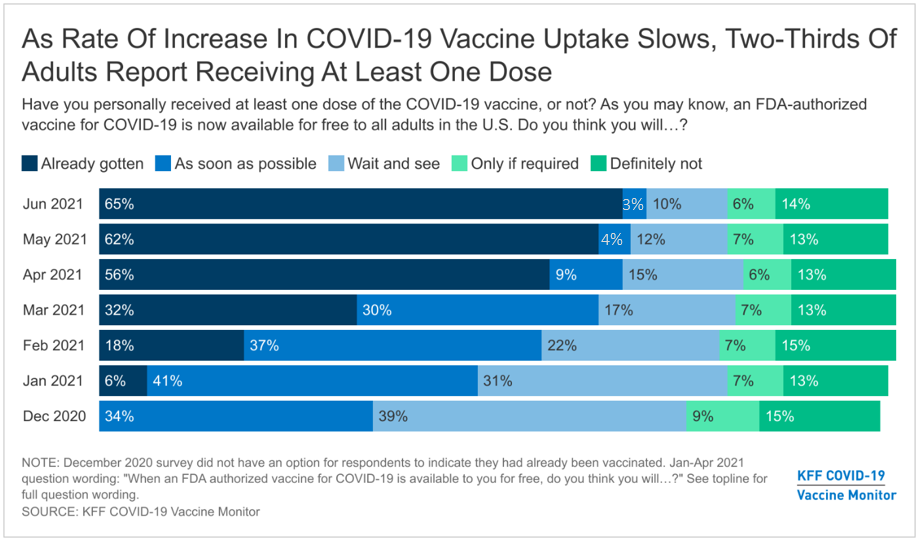 With new COVID-19 cases at their lowest level since testing became widely available more than a year ago, about three-quarters (76%) of the public now says they are optimistic that the country is nearing the end of the pandemic.

This optimism ironically may be contributing to the slowdown in new vaccinations. Half (50%) of those who are unvaccinated say that cases are now so low that there is no need for more people to get a shot. In comparison, the vast majority (91%) of people who have gotten at least one dose say that more people still need to get vaccinated. These findings underscore the importance of vaccine communication that emphasizes that the pandemic is not over.

The Monitor also looks at other potential incentives or developments that could boost vaccine take-up rates among those currently unvaccinated, particularly among those in “wait and see” mode.

Similar to last month, the new report finds that three in ten (31%) unvaccinated adults – and roughly half (49%) of the “wait and see” group – say that they would be more likely to get a vaccine if the U.S. Food and Drug Administration (FDA) granted full approval for one of the available vaccines.

However, those views may be more of a proxy for general safety concerns, as just a third (32%) of adults overall are aware that the FDA has only authorized the existing vaccines for emergency use while the rest either believe the vaccines already have full approval (21%) or aren’t sure (45%). Among unvaccinated adults who are aware that the vaccines are available under emergency use authorization, 32% say they would be more likely to get a vaccine if it were fully approval by the FDA.

Other potential motivators for the unvaccinated include:

• Nearly a quarter (23%) say they would be more likely to get vaccinated if they were entered in a lottery with a chance to win $1 million. This includes even larger shares of unvaccinated young adults ages 28-29 (33%), Black adults (34%) and those with household incomes under $40,000 annually (31%).

• About one in six (17%) say they would be more likely to get vaccinated if a mobile clinic came to their neighborhood. The share is higher among Hispanic (33%) and Black (22%) adults than among White adults (10%).

• Among unvaccinated parents, 13% say they would be more likely to get vaccinated if they were provided free childcare to get the vaccine and while they recover from side effects.

Vaccination Rates Among Children Ages 12-17 Rise, though Many Parents Worry about Heart Issue


Less than two months after the FDA authorized the emergency use of a COVID-19 vaccine for children as young as 12 years old, a third (34%) of parents with children ages 12-17 say their children have already received at least one dose of the vaccine, up from a quarter (24%) in May. An additional 8% say they will get their 12-17 year old children vaccinated right away.

Parents of younger children who are not yet eligible to get a COVID-19 vaccine remain more cautious. About a quarter (27%) say they would get their child vaccinated as soon as they are able, while a third (33%) want to “wait and see.” Others say they would get their younger children vaccinated only if required by their school (11%) or not at all (26%).

Large shares of the public (67%) and of parents (74%) say they have heard at least a little about the U.S. Centers for Disease Control and Prevention (CDC) investigation about 800 cases of rare heart problems and inflammation that has occurred in some teenagers and young adults after they were vaccinated.

About half of parents (50%) say they are at least somewhat concerned about the risk. These parents tend to be more cautious about getting their children vaccinated than parents who haven’t heard about the potential heart issue or aren’t concerned about it.

Most parents (61%) say they do not think K-12 schools should require students to get vaccinated for COVID-19. This reflects a significant partisan divide, with most parents (58%) who identity as Democrats or lean that way saying schools should mandate vaccinations, while nearly eight in ten (79%) of those who identify as Republicans or lean that way saying they shouldn’t.

When it comes to colleges and universities, similar majorities of the public (58%) and of college students (58%) favor a requirement that all students get vaccinated unless they have a medical excuse. These views also diverge along partisan lines, with Democrats more than twice as likely to support a vaccination mandate at colleges and universities than Republicans are (82% vs. 33%).