Four in Ten Parents Say Someone in Their Household Left a Job or Worked Fewer Hours to Care for Their Children, Including Higher Shares of Black, Hispanic, and Lower-income Parents

As a result of the pandemic, about four in ten (39%) parents of school-aged children (ages 5-17) say at least one of their children fell behind academically, rising to half among parents with household incomes below $40,000 (51%) and Hispanic parents (50%), a new KFF Vaccine Monitor report shows.

Among parents of children under age 18, more than a third (36%) say at least one of their children fell behind in social and emotional development because of the pandemic and about three in ten (29%) say a child experienced mental health or behavioral problems.

Parents whose children attended school at least partially online in the previous school year are more likely than parents whose child attended school all or mostly in-person to say they had a child who fell behind academically (47% vs. 26%) or in their social or emotional development (46% vs. 31%), or experienced mental health or behavioral problems (39% vs. 22%). These differences persist even after controlling for demographic differences including gender, race/ethnicity, income, parents’ education level, and whether children attended a public or private school.

In the past 12 months, about four in ten parents (42%) say their children experienced a new mental health symptom that they did not experience prior to the pandemic, including difficulties concentrating on schoolwork (27%), nervousness or being easily scared (19%), sleeping problems (18%), poor appetite or overeating (15%), or frequent headaches or stomachaches (11%).

About four in ten parents say that they or someone else in their household left a job or changed work schedules in the past year in order to care for their children. Black (53%) and Hispanic (44%) parents are more likely than White parents (32%) to say their household suffered a job disruption due to childcare needs, as are parents with lower incomes (51% of parents with household incomes under $40,000) compared to those with higher incomes (35% of those with incomes of $40,000 or more).

Among parents who say they left a job or changed their work schedule to care for their children during the pandemic, over half (54%) say they still have not returned to a pre-pandemic work schedule, representing one in five (21%) of all parents. Roughly four in ten lower-income parents (39%), one-third of Black parents, and one-quarter of Hispanic parents say their household had a work disruption and has still not returned to their pre-pandemic job or hours. 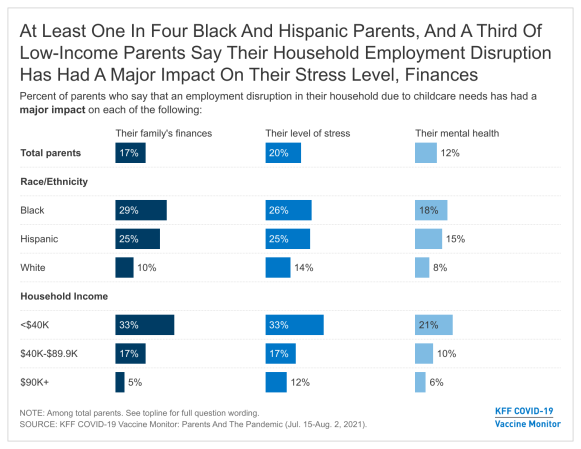 The new report shows that parents who experience household employment disruptions due to childcare are more likely to report that their children fell behind academically (51% vs. 32%), fell behind in social and emotional development (49% vs. 28%), or experienced mental health problems (41% vs. 21%) compared to those that did not have an employment disruption during the pandemic.

Designed and analyzed by public opinion researchers at KFF, the KFF Vaccine Monitor: The Impact of The Coronavirus Pandemic On The Wellbeing Of Parents And Children was conducted from July 15-August 2 among a nationally representative probability-based sample of 1,259 parents with a child under age 18 in their household. Interviews were conducted in English and Spanish, online (908) and via telephone (351). The margin of sampling error is plus or minus 4 percentage points for the full sample. For results based on subgroups, the margin of sampling error may be higher.