A key provision of the Affordable Care Act (ACA) is the requirement that private insurance plans cover recommended preventive services for women without any patient cost-sharing.1 On December 20, 2016, the Health Resources and Services Administration updated the preventive services for women by accepting the recommendations of the Women’s Preventive Services Initiative, convened by the American College of Obstetricians and Gynecologists (ACOG), and comprised of representatives of national groups with expertise in women’s health. The committee reaffirmed the services for women that were recommended in 2011 and added one new one for mammography.

Prior to the ACA’s full implementation, one in five women reported they postponed or went without preventive care because of cost, a much greater barrier for low-income and uninsured women (Figure 1). This factsheet summarizes the ACA preventive services policy’s impact on women, with a focus on the women’s services that are promulgated by HRSA. 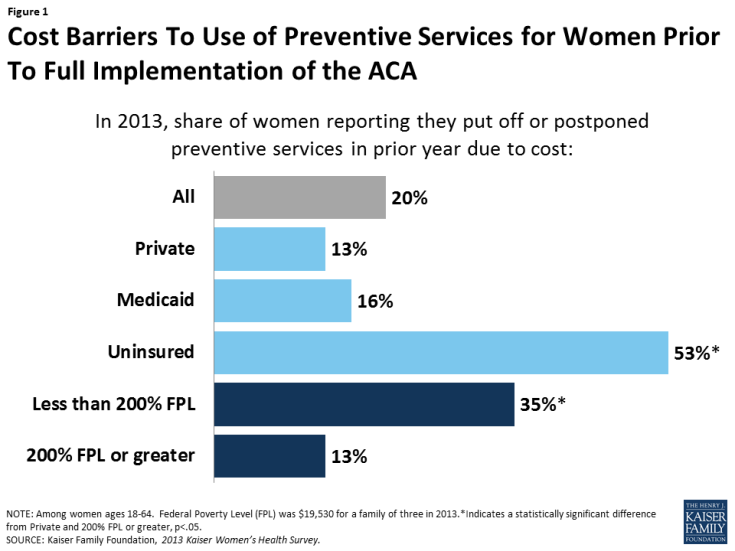 Figure 1: Cost Barriers To Use of Preventive Services for Women Prior To Full Implementation of the ACA

Under Section 2713 of the ACA, private health plans must provide coverage for a range of preventive services for adults and children and may not impose cost-sharing (such as copayments, deductibles, or co-insurance) on patients receiving these services. These requirements apply to most private plans – including individual, small group, large group, and self-insured plans in which employers contract administrative services to a third party. The policy also applies to beneficiaries covered under the ACA’s Medicaid expansion. For children and adolescents, plans must cover the services recommended by the Health Resources and Services Administration’s Bright Futures Project. The required preventive services for adults2 are based on evidence-based recommendations issued by the following three different federal organizations: the United States Preventive Services Task Force (USPSTF), the Centers for Disease Control and Prevention Advisory Committee on Immunization Practices (ACIP), and for women, the Health Resources and Services Administration (HRSA). The preventive services that HRSA requires for women were initially based on recommendations from an expert committee convened by the Institute of Medicine (now the National Academy of Medicine).3 This subset of services for women was just updated by HRSA, and is based on recommendations from the Women’s Preventive Services Initiative (WPSI), a committee convened by ACOG. Table 1 summarizes all of the preventive services affecting women recommended by these three committees that the ACA requires plans to cover without cost sharing.

Highlights on the Updated HRSA-Defined Preventive Services for Women

The contraceptive coverage recommendation has been updated. This policy requires that all private plans must cover without cost sharing all 18 distinct prescribed methods used by women (Table 2), as outlined by the Food and Drug Administration (FDA). Insurers may continue to limit coverage in these categories to generic drugs and can impose cost-sharing for equivalent branded drugs. The WPSI reiterates that contraceptive care should include counseling, initiation of contraceptive use, and follow-up care (e.g. management and evaluation as well as changes to and removal or discontinuation of the contraceptive method).

Of all the preventive services, contraception has gained the most attention, with some employers suing the federal government and seeking an exemption from the rule based on the premise that by including contraception in their plans they were being forced to violate their religious beliefs. This litigation reached the US Supreme Court in two cases: Burwell v Hobby Lobby and Zubik v Burwell.4

The updated HRSA preventive services coverage rules now require that average-risk women be covered for mammography screening. Coverage may begin between ages 40 and 50 and continue through at least age 74, every 1-2 years.  HRSA recommends that an individual woman decide on timing and frequency of mammography in consultation with her health care provider. Additionally, the USPSTF recommends that women with family history of breast, ovarian, or peritoneal cancer should be screened for BRCA-related cancer, and those with positive results should receive genetic counseling and genetic testing when appropriate. The USPSTF also recommends that some women with higher risk for breast cancer take prophylactic medications, such as tamoxifen or raloxifene, which must be covered without cost sharing under the ACA.5

The HRSA services include cervical cancer screening for women ages 21 to 65.  Depending on age and risk, a combination of Pap and HPV testing may be used.

HRSA recommends screening all pregnant women for gestational diabetes. Prenatal visits are also covered without cost sharing as part of the HRSA recommendation for well woman visits, discussed further below. This is in addition to a number of screening tests recommended by the USPSTF for pregnant women, plus folic acid supplements and substance abuse counseling and cessation (Table 1).

The HRSA services include HIV counseling, at least one HIV test during a woman’s lifetime and more if needed, for women at higher risk for contracting HIV.

Screening for Interpersonal and Domestic Violence

The committee recommends that providers screen adolescents and women for violence and provide or refer to interventional services when needed. This can include counseling, education, and other support services.

The HRSA services for women include coverage for at least one annual well-woman visit that women can use to obtain all of the preventive services that are recommended, including prenatal care. They note that for some women, more than one visit may be needed to cover all the preventive and counseling services they need.

A repeal of the ACA as proposed by President-elect Trump would end the requirement that recommended preventive services be covered by private plans without cost sharing, unless this provision is included as part of replacement legislation. The specific preventive services for women that were updated and promulgated by HRSA, however, could also be eliminated or scaled back by administrative action, without the need for Congressional action because HRSA can accept or reject any of the women’s services recommended by the WPSI.

As the Trump administration transitions to the White House, it remains to be seen how or whether the new administration and 115th Congress will specifically address preventive services for women more broadly. The administration and Congress, however, have signaled that they will address the accommodation for employers claiming religious objections to the contraceptive coverage provision.6  Although the contraceptive coverage provision has been controversial among certain employers, among the public, and especially among women, there has been widespread support for the requirement (Figure 2). Research has also documented that women’s out-pocket-spending on contraceptives has dropped significantly as a result of the law.7 Given that more than 90% of women use contraceptives at some point in their lives,8 this is a benefit that affects millions of women. 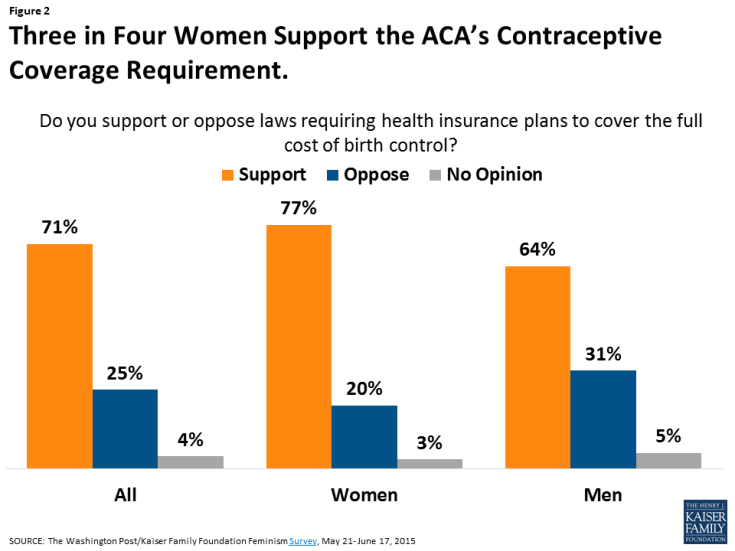