Workplace benefits are an important part of balancing work, family, and medical needs. Benefits such as paid family leave and sick days can help employees meet their personal and family health care needs, while also fulfilling work responsibilities. Yet there is no federal requirement for paid leave or sick days, which leaves many individuals, particularly low-income workers, to face tradeoffs such as taking time off while forgoing wages, going to work while sick, or paying for caretakers for their children and family members.

The federal Family and Medical Leave Act (FMLA) requires eligible employers to provide unpaid family leave. However, unlike most other developed nations, the U.S. does not have national standards on paid family or sick leave.1 There have been a number of local and state initiatives to expand access to paid family leave and sick days in parts of the U.S. Employees not covered by these local laws must rely on voluntary employer policies, which can vary considerably. This is a particularly salient concern for women, who are often the primary caretakers for children and also comprise nearly half of the nation’s workers.2 Approximately seven in ten women (70.5%) with children under age 18 were in the labor market in 2016.3

Policies that address the balance of work and economic security with health and family needs have stalled at the federal level. The most recent national policy reform occurred in 1993, when the federal government passed the FMLA giving eligible employees up to 12 weeks of unpaid leave to care for seriously ill family members, the arrival of a child, and job protection when an employee returns from family or medical leave. The law applies to private employers with 50 or more employees, and public agencies. The law has provided job security to millions of workers who take time off to care for a critically ill family member or a new child in the family. However, only 60% of the workforce is eligible for FMLA protections4 because small employers are exempt and even in covered worksites, not all employees are eligible.5 Since 1993, 11 states and the District of Columbia have expanded unpaid leave benefits past FMLA standards by either increasing the amount of leave time offered or expanding the definition of an eligible family member.6

On the paid leave front, there have been many attempts to build upon the FMLA and enact national paid leave policy, but no federal legislation has ever been passed. Proponents urge that paid leave would provide employees with greater financial security when they must take an extended leave for medical reasons or to care for an ailing family member or new child.7 Opponents cite concerns about the impact of new federal requirements on local government and employers as well as the financial implications a new benefit would have on wages and employment.8 President Barack Obama’s administration issued a presidential memorandum that provides six weeks of paid family and medical leave for federal employees. President Donald Trump’s budget for fiscal year 2018 includes a proposal that would require states to cover six weeks of parental leave for mothers and fathers after the birth or adoption of a child and allocated $19 billion over the next 10 years to fund the program, but a formal proposal has not yet been issued by the Administration.9

Currently, five states – California, New Jersey, New York, Rhode Island, and Washington – as well as the District of Columbia (D.C.) have enacted laws offering paid family leave (Figure 1). These states administer and fund paid leave through their own disability programs to allow some workers to care for an ill family member or bond with a child. The programs are typically supported through employee and/or employer payroll taxes, and provide partial wage replacement up to a designated cap for employees in certain firms. 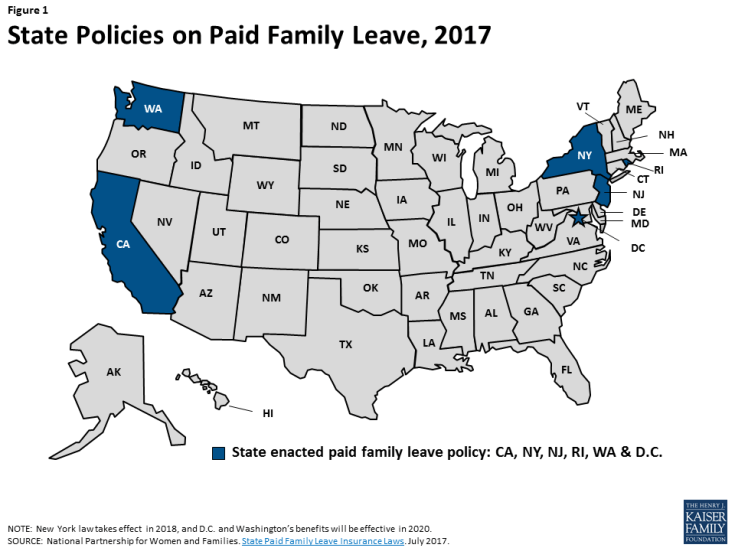 There is no federal requirement that employers allow employees to take sick days when they or a family member has a short-term illness that does not permit them to work. The Obama Administration issued an executive order that requires federal contractors to offer at least seven days of paid sick leave per year to their employees, on an accrual basis.10 At the time of enactment, this applied to approximately 300,000 people working on federal contracts. Furthermore, government employees have generally had access to paid sick days through employee benefits packages.11

There has been more state and local traction on paid sick days policies (Figure 2). Since the first law was passed by voter initiative in 2006 in San Francisco, eight states plus D.C.,12 28 cities, and 2 counties passed laws requiring that eligible employees get paid time off to care for themselves or sick children. Several of these laws also specifically allow workers to use paid sick days for reasons related to caring for other sick family members, or in cases of sexual assault, harassment, or domestic violence. Current paid sick days laws generally work on an accrual basis, dependent on previous hours worked. The pay rate and the amount of paid sick time that can be accrued varies by policy. 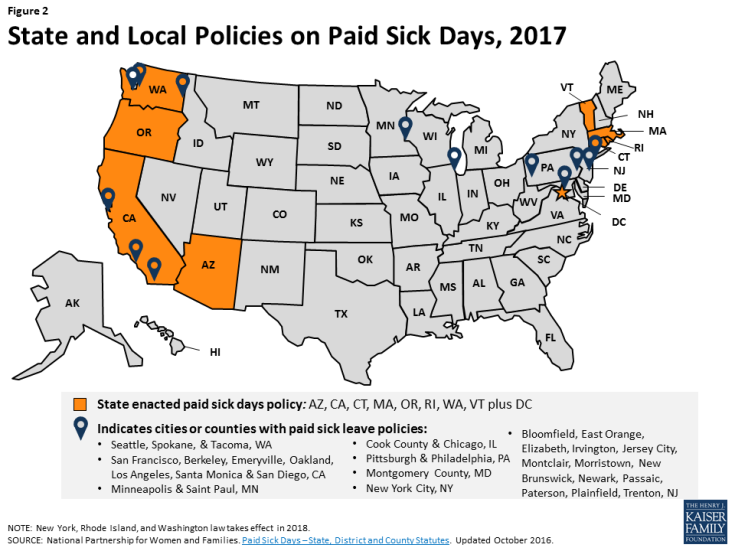 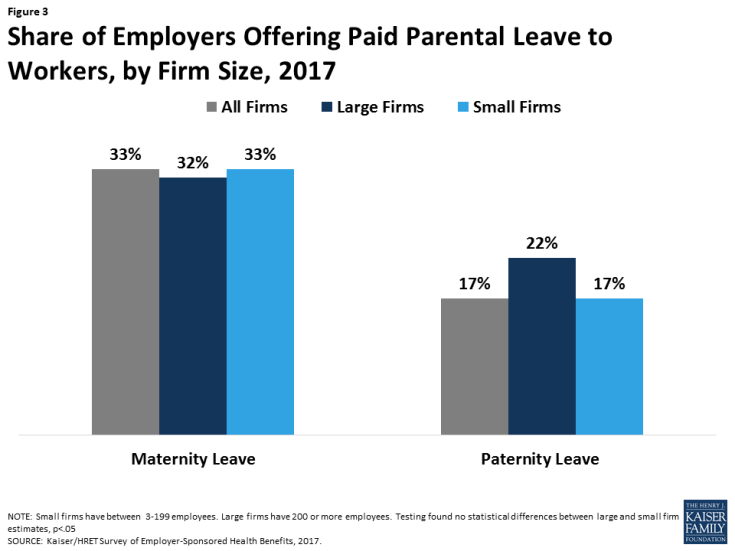 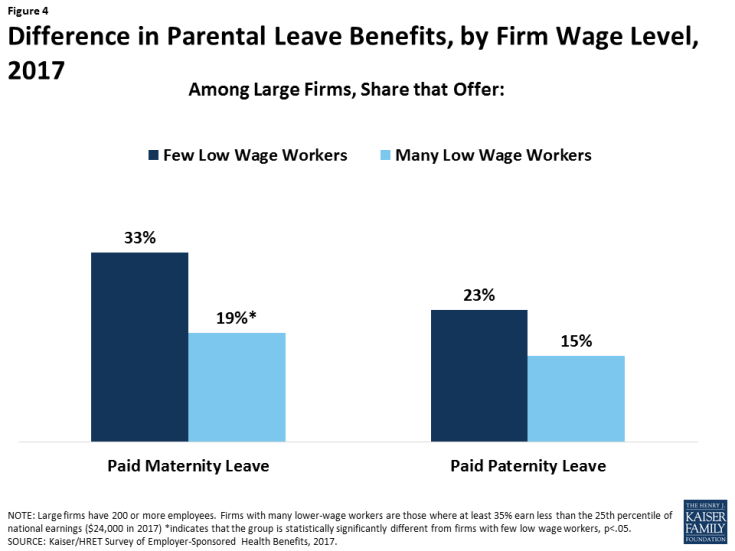 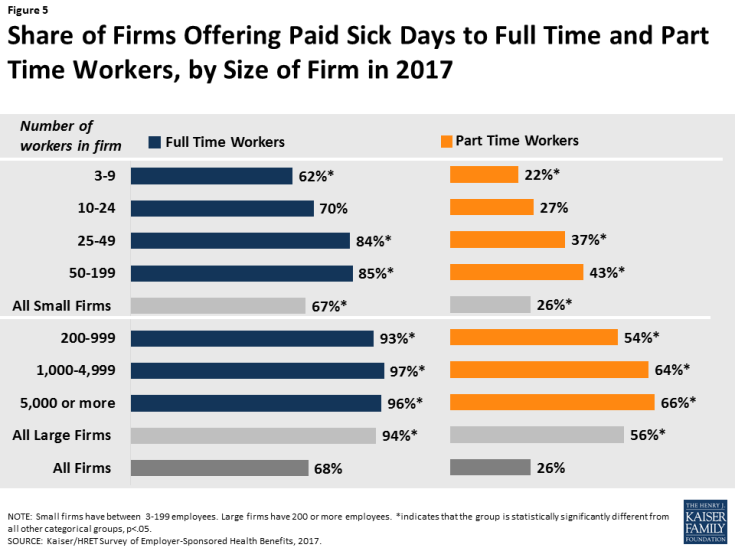 Figure 5: Share of Firms Offering Paid Sick Days to Full Time and Part Time Workers, by Size of Firm in 2017

As a result, among non-federal employees, 87% work in firms that offer paid sick days to their full-time workers and 50% work in firms that offer the benefit to part-time workers. The lower likelihood of paid sick days for part-time workers has a disproportionate impact on women, who are more likely than men to hold part time jobs.16 Women are also more likely than men to care for children when they are sick and have to stay home from school.

There are differences in availability of paid sick days between different kinds of firms. Large firms classified as private for-profit are less likely to offer paid days for their full time employees (88%) than public firms (100%) or private not-for-profit firms (99%). This is also the case for part time workers (Figure 6). This may be related to the presence of unions in firms, which also influences a firm’s benefits package. Large firms with at least some union workers are more likely to provide the benefit to their full time staff (98%), versus firms with no union workers (92%). 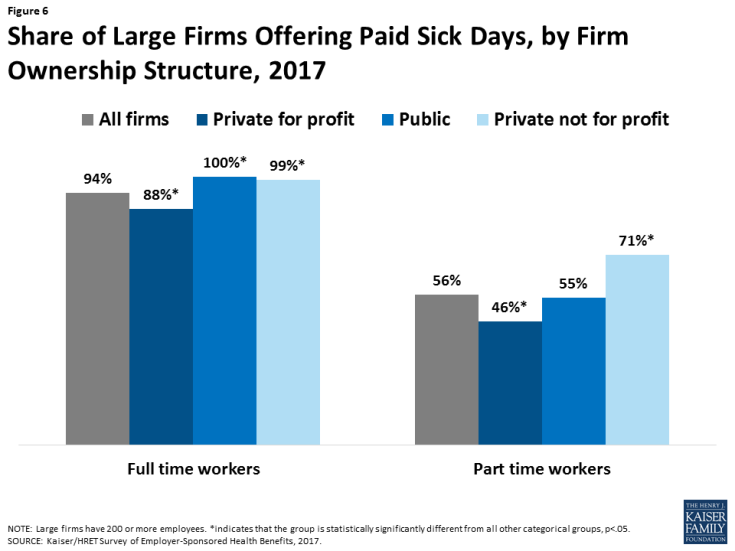 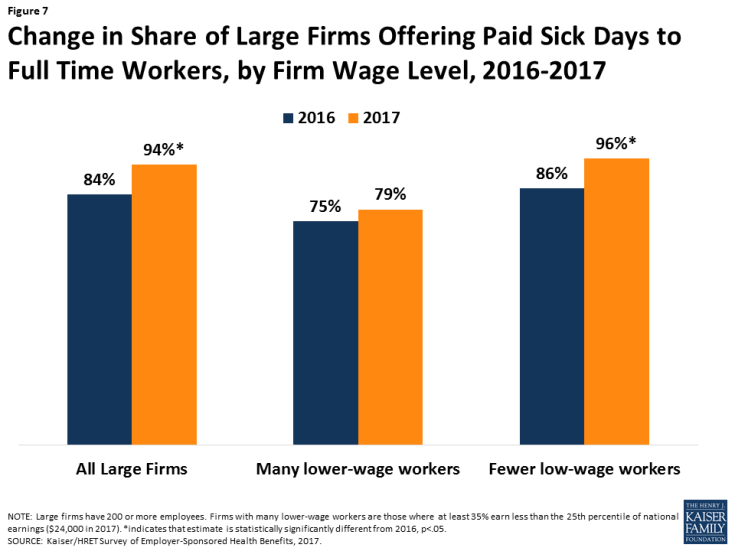 Paid leave continues to be a significant national and local national policy issue. President Trump has spoken about the need for supporting working class Americans, and forwarded the framework for a proposal to require states to offer six weeks of paid parental leave.  At this point in time, the proposal lacks details and it remains to be seen whether Congress will take up this issue. Short of that, the movement for paid leave and paid sick days will likely continue to be centered on state and local policies or those voluntarily adopted by employers or negotiated through union contracts.  Given that most people will need time off during their working lives to care for a personal or family illness, or for a new child, this issue will continue to be a salient concern for working families across the country in the years to come.