Where Do We Stand in The Fight Against Ebola? A Conversation with CDC Director Tom Frieden

This Visualizing Health Policy infographic provides a snapshot of the 2014 Ebola outbreak in West Africa. It includes key facts about the Ebola virus, shows how the number of Ebola cases in the current outbreak outstrips the case total from all previous Ebola outbreaks, and offers a summary of the…

Web Briefing for Media: What Do The Sustainable Development Goals Mean for Global Health?

In late September, the United Nations General Assembly will discuss and adopt a plan for international development for the next 15 years. This new plan, called the Sustainable Development Goals (SDGs), could have important implications for global health policy. On September 9, the Kaiser Family Foundation held an interactive web briefing exclusively for journalists to examine these key issues ahead of the United Nations General Assembly. 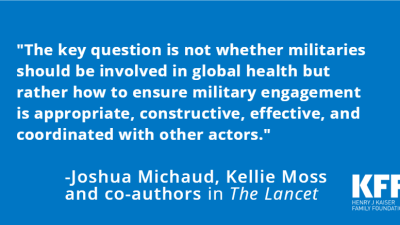