This analysis provides estimates of the share of uninsured people eligible to enroll in the Affordable Care Act marketplaces who will be subject to the individual mandate penalty, and how those penalties are increasing for 2016. It also provides estimates of the number of people who could have a zero-dollar contribution or pay less for health insurance than the penalty, due to premium subsidies, and the number of people who would pay more for a health plan than for their penalty. 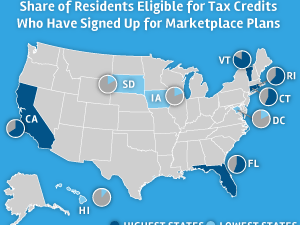 How Much Financial Assistance Are People Receiving Under the Affordable Care Act?

This analysis examines the amount of financial assistance that people have qualified for through premium tax credits in the new health insurance marketplaces (also known as exchanges) under the Affordable Care Act through the end of February 2014. The brief also examines the implications that the enrollment variation carries for the potential tax benefits the Affordable Care Act offers to state residents.

In this column for The Wall Street Journal’s Think Tank, Drew Altman explains that Tennessee Gov. Bill Haslam’s decision on Medicaid expansion via the Affordable Care Act is the latest sign of pragmatism slowly winning over ideology in red states.

Pulling It Together: Predictions

I usually don’t make predictions, unless they are backed up by the kind of statistical modeling we often produce.  But here are three predictions I am confident about that form the basis of this latest column. GROUP HEALTH INSURANCE PREMIUMS WILL CONTINUE TO RISE AT HISTORICALLY MODERATE LEVELS, AT LEAST…