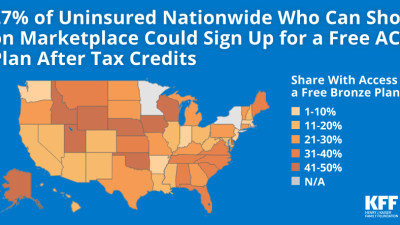 How Many of the Uninsured Can Purchase a Marketplace Plan for Free?

This analysis looks at how many of the remaining uninsured are eligible for premium subsidies that are large enough to cover the entire cost of a bronze plan, which is the minimum level of coverage available on the Marketplaces. It estimates 27% of uninsured individuals who could shop on the ACA Marketplace, or 4.2 million people nationwide, are eligible to purchase a bronze plan with $0 premiums after subsidies in 2019. 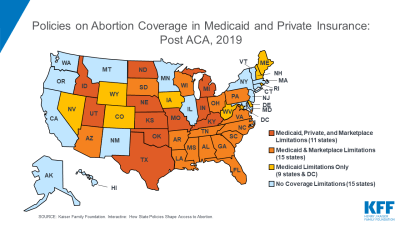 An estimated 10.6 million people nationally received personal help from navigators and assisters during the Affordable Care Act’s first open enrollment period, finds a new Kaiser Family Foundation survey of navigators and assister programs nationally. The survey estimates that the 4,400 assister programs operating nationally had an estimated 28,000 full-time staff and volunteers, suggesting each assister would have helped more than 370 people on average during the six-month open enrollment period that ran from October 1 through March 31.

The Stakes Beyond the Halbig Lawsuit

In a column for The Wall Street Journal’s Think Tank, Drew Altman discusses if the legal court cases about whether the government can provide tax credits to people in the Affordable Care Act’s federal health exchanges will be perceived by the American people as a legitimate legal question or as more inside-Washington politics.

Connecting Consumers to Coverage: Lessons Learned from Assisters for Successful Outreach and Enrollment

This brief highlights the experiences of Navigators and other Marketplace consumer assistance programs under the Affordable Care Act (Obamacare) in conducting outreach and providing enrollment assistance during the ACA’s first open enrollment period. It provides insight into the outreach and enrollment strategies the assisters developed and identifies the keys to successfully overcoming the challenges of the first year. These insights are based on findings from focus groups with assisters in four cities: Miami, Florida; Houston, Texas; Raleigh, North Carolina; and Cleveland, Ohio.

Webinar for Journalists: Results from Survey of People Who Bought Their Own Health Insurance Under the ACA

The Kaiser Family Foundation held a reporters-only webinar at 11 a.m. ET on Thursday, June 19 to release its new Survey of Non-Group Health Insurance Enrollees, providing a first look at people buying their own health insurance following the implementation of the Affordable Care Act. The first in a series,…