Following up on an earlier column for The Wall Street Journal’s Think Tank on seniors and poverty, Drew Altman looks at why older women will be more at risk of economic insecurity than men in the future. 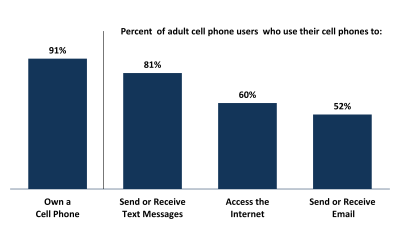 This brief provides an overview of mobile technology use today, with a focus on the low-income population and people of color, and discusses how one text messaging initiative, text4baby, is helping to connect eligible pregnant women and their families to health coverage.

As Congress debates comprehensive national health reform, the Kaiser Family Foundation has two reports and an updated fact sheet that examine state-level health reform in Massachusetts and the lessons it offers for policymakers in Washington. Consumers’ Experience in Massachusetts: Lessons For National Health Reform and In Pursuit of Affordable Health…

This brief, the first in a series, examines the new federal “performance bonus” available to states that do an especially good job of signing up eligible children for Medicaid. The bonus, created by a provision in the Children’s Health Insurance Program Reauthorization Act of 2009, is designed to help states…

This report examines the impact of state health reform efforts on the lives of ordinary people in Massachusetts, including a look at coverage provided by both public programs and private sources. It focuses specifically on people’s ability to afford and obtain needed care. Report (.pdf)

Medicaid and Community Health Centers: The Relationship Between Coverage for Adults and Primary Care Capacity in Medically Underserved Communities

Community health centers play an important role in providing care to uninsured and low-income individuals living in medically underserved communities. They rely on many different revenue sources and, over time, Medicaid has become a central source of funding for most health centers. To better understand how Medicaid influences health center…

Express Lane Eligibility: How to Enroll Large Groups of Eligible Children in Medicaid and CHIP

This issue paper explores the potential for increasing enrollment in children’s health insurance programs through “Express Lane Eligibility.” Express Lane Eligibility is the accelerated enrollment of low-income uninsured children already participating in other income-comparable publicly funded programs, such as WIC or school lunch, into Medicaid or CHIP. The paper reviews…