This brief commissioned by the Foundation considers areas where Medicare faces limited opportunity for market-based competition and price negotiation to drive down drug spending. These areas include drug purchasing for low-income people enrolled in Part D plans who face minimal cost-sharing requirements, and purchasing certain unique drugs, such as biologicals,…

The Foundation, as part of The Washington Post/Kaiser Family Foundation/Harvard University partnership series, conducted a poll to examine the public’s views on the government and its role. The Role of Government Survey is the 20th in a series of surveys dating back to 1995 that have been conducted as part…

Incorporating data from the 2009 Medicare Trustees’ Report, this chartpack examine the fiscal challenges facing the Medicare program as well as the public’s views on confronting them. Chartpack (.pdf)

Although regional variations in health spending have been studied for decades, there is renewed focus on this issue because of the role of health care costs in health care reform and the potential source of funds if addressing cost variations can yield savings. This explainer examines what is known about…

Summary of Key Changes to Medicare in 2010 Health Reform Law

Summary of Key Changes to Medicare in 2010 Health Reform Law . This brief provides a detailed look at the improvements in Medicare benefits, changes to payments for providers and Medicare Advantage plans, various demonstration projects and other Medicare provisions in the law. It includes a timeline of key dates for implementing the Medicare-related provisions in the law.

Pulling it Together: An Actuarial Rorschach Test

Drew Altman, Larry Levitt, Gary Claxton My colleagues have worked on this column with me and I invited them to join me as authors. As with pretty much every other discussion of health care going back to the days of Roosevelt, the great reform debate of 2009 (and now 2010)…

This month’s Kaiser Health Tracking Poll reveals little change in public opinion about the health reform law. Americans remain divided overall, with 42 percent having a favorable opinion of the law and 44 percent viewing it unfavorably. Three in ten continue to want to see the law expanded, while roughly…

This report projects the impact of the new Medicare drug benefit on out-of-pocket spending for people who enroll in 2006. This analysis from November 2004 estimates that 6.9 million beneficiaries are projected to be affected by the coverage gap (the so-called “doughnut hole”) in the standard Part D drug benefit.… 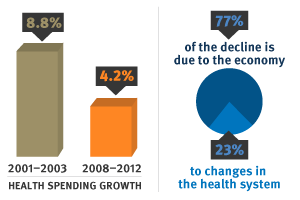