Following the Supreme Court’s King v. Burwell decision, the Affordable Care Act could use a break from the intense political heat, though it may not get a long one as the 2016 election season heats up and presidential candidates play to their bases on health care, writes Drew Altman in…

Larry Levitt’s March 2015 post explores what could happen if the U.S. Supreme Court rules for the plaintiffs in the King v. Burwell case, the lawsuit that challenges the federal government’s authority to provide financial assistance to people who buy insurance in federally-operated marketplaces created by the Affordable Care Act. 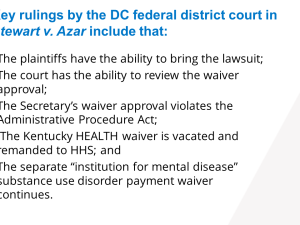 Insurance Markets in a Post-King World

This perspective addresses how insurance markets might respond if the US Supreme Court sides with the plaintiffs in the King v. Burwell case. The case challenges the legality of premium and cost-sharing subsidies for low- and middle-income people buying insurance in states where the federal government rather than the state is operating the marketplace under the Affordable Care Act (ACA).