A Guide to the Medicaid Appeals Process

This background brief provides a comprehensive look at the appeals process for the Medicaid program, which differs significantly from those available through the Medicare program and private health insurance. The Medicaid appeals process provides redress for individual applicants and beneficiaries seeking eligibility for the program or coverage of prescribed services,…

The Health Reform Law’s Medicaid Expansion: A Guide to the Supreme Court Arguments

One significant element of the pending U.S. Supreme Court case challenging the Affordable Care Act is the constitutionality of the law’s Medicaid expansion. This provision of the law requires states that choose to participate in the Medicaid program to cover nearly all adults under age 65 with household incomes at… 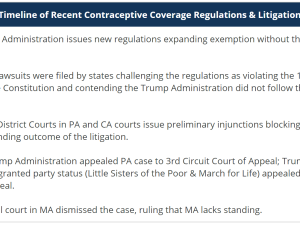 Following the Supreme Court’s King v. Burwell decision, the Affordable Care Act could use a break from the intense political heat, though it may not get a long one as the 2016 election season heats up and presidential candidates play to their bases on health care, writes Drew Altman in his latest column for The Wall Street Journal’s Think Tank.

With the Supreme Court ruling on King v. Burwell upholding the Affordable Care Act’s federal subsidies, Drew Altman’s column in The Wall Street Journal’s Think Tank explores what the decision means and what’s next for the health law.