More than half (56%) of people in the United States under age 65 receive health insurance coverage as an employer benefit.  While Medicare covers virtually all those who are 65 years or older, the nonelderly who do not have access to or cannot afford private insurance now go without health coverage unless they qualify for insurance through the Medicaid program, Children’s Health Insurance Program (CHIP), or a state-subsidized program.  The gaps in our private and public health insurance systems leave over 47 million nonelderly people in the country—18% of those under age 65—without health coverage. The risk of being uninsured is greatest for those with the lowest incomes (Figure 2). Health reform targets this population through federal subsidies to help purchase private insurance coverage and expanded eligibility for Medicaid. 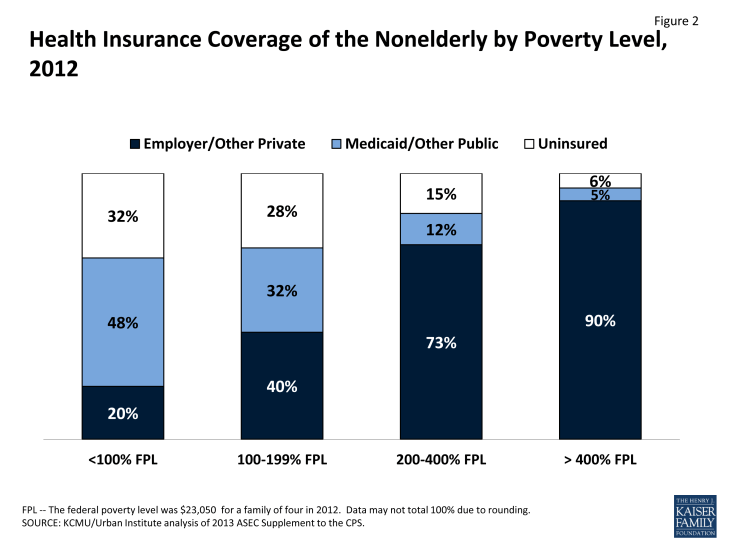 Figure 2: Health Insurance Coverage of the Nonelderly by Poverty Level, 2012

However, many workers do not have access to employer-sponsored insurance.  Currently, businesses are not legally required to offer a health benefit. The majority of uninsured workers are not offered health insurance by their employer.3  Some people work in firms that cover some employees but are not themselves eligible for coverage, often because they have not worked for their employer for a sufficient amount of time or because they do not work enough hours. Among firms that offer health benefits in 2013, an average of 77% of their workers are eligible for coverage.4

The cost of employer-sponsored coverage is the most common reason employers cite for not offering health coverage.5  In 2013, annual employer-sponsored premiums averaged $5,884 for individual coverage and $16,351 for family coverage.  Total family premiums, as well as the employee’s share of those premiums, have risen by over 70% in the last ten years.

Small firms are less likely to offer coverage than large firms.  Nearly all businesses (99%) with at least 200 workers offer health benefits to their workers in 2013, but only 57% of firms with less than 200 workers offer these benefits.7  On average, small firms ask employees to contribute a lower amount annually towards their own health benefits compared to large firms ($862 vs. $1,065 per year).  However, small firms ask for larger annual contributions for family coverage ($5,284 vs. $4,226).

The majority of employees participate in their employer’s health plan when they are offered coverage.  Even when businesses offer health benefits, some employees do not sign up because of difficulty affording the required employee share of the premium.  Approximately three-quarters of employees eligible for employer-sponsored insurance enrolled in 2008 and 2009, though the take-up rate of employer-sponsored coverage decreased slightly over the last ten years.8

Health coverage varies both by industry and by type of occupation.  Across industries, uninsured rates for workers range from 39% in agriculture to just 7% in public administration.11 But even in industries where uninsured rates are lower, the gap in health coverage between blue and white-collar workers is often two-fold or greater (Figure 3). More than 80% of uninsured workers are in blue-collar jobs. 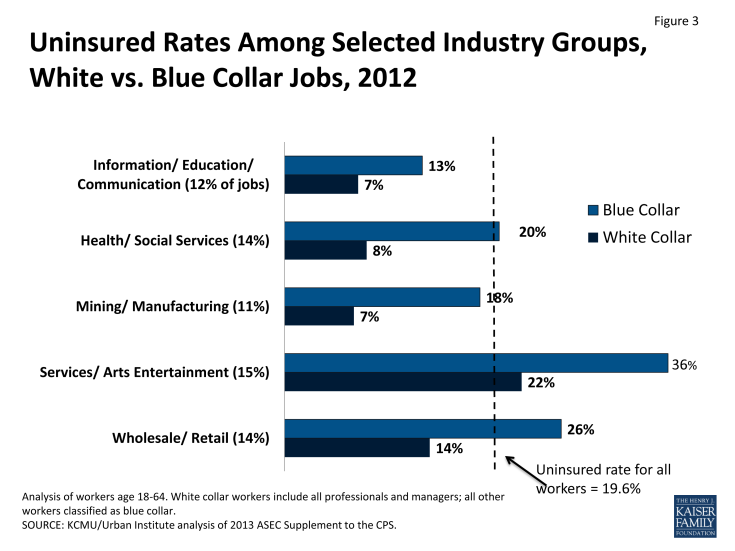 Private policies directly purchased in the non-group or individual market (i.e., outside of employer-sponsored benefits) cover only 5.8% of people under age 65.  The share of the nonelderly population with private non-group insurance has changed very little over time. However, after 2014, state based Marketplaces and premium tax credits will increase access to non-group coverage for many uninsured individuals and families.

Non-group insurance premiums can be more expensive for the enrollee than group plans purchased by employers.  Though, on average, non-group insurance premiums are lower than those for employer-sponsored coverage, enrollees pay 100% of the cost because they cannot share that premium expense with an employer. Nationwide, the average monthly premium per person in the non-group market in 2010 was $215, with substantial variation by state.12  Vermont and Massachusetts both had average per member per month premiums over $400, compared to less than $160 in Alabama and California.  In addition, deductibles and other cost sharing in non-group plans are often higher than in employer-sponsored coverage. Beginning in 2014, most people with incomes from above 138% to 400% of the federal poverty level who cannot access affordable employer-sponsored insurance will receive financial assistance to purchase coverage through Health Insurance Marketplaces.

Obtaining coverage in the individual market can be difficult, particularly for those who are older or have had health problems.  Historically, premiums in the non-group market could vary by age or health status, and people with health problems or at risk for health problems could be charged high rates, offered only limited coverage, or denied coverage altogether. In 2008, 29% of individuals age 60 to 64 who applied for non-group insurance were denied coverage based on their health status.13 Starting in 2014, insurers will be barred from taking pre-existing conditions into account when issuing policies for adults.  Beginning in September 2010, the ACA prohibited individual and group health plans from denying children coverage based on pre-existing medical conditions and from containing pre-existing condition benefit exclusions for children.

Medicaid and CHIP currently provide coverage to some, but not all, low-income individuals and people with disabilities.  Medicaid and CHIP cover 17.9% of the nonelderly population by primarily covering four main categories of low-income individuals: children, their parents, pregnant women, and individuals with disabilities. Individuals who do not fall into one of the categorical groups—most notably adults without dependent children—have generally been ineligible for public coverage regardless of their income.

Medicaid and CHIP are particularly important sources of coverage for children. Currently, federal law requires state Medicaid programs to cover school age children up to 100% of the poverty level (133% for preschool children), and states have expanded coverage for children in families with slightly higher incomes through the Children’s Health Insurance Program (CHIP). Medicaid and CHIP are the largest source of health insurance for children in the U.S., covering 71% of poor children and almost half (49%) of near-poor children (Figure 4). Still, as of 2011, over half (53%) of uninsured children were eligible for Medicaid or CHIP but not enrolled.14  There are multiple possible reasons for children who are eligible but are not enrolled. Some families are not aware of the availability of the programs or their eligibility. For others, burdensome enrollment and renewal requirements pose major obstacles to participation, despite major improvements made over the past decade. 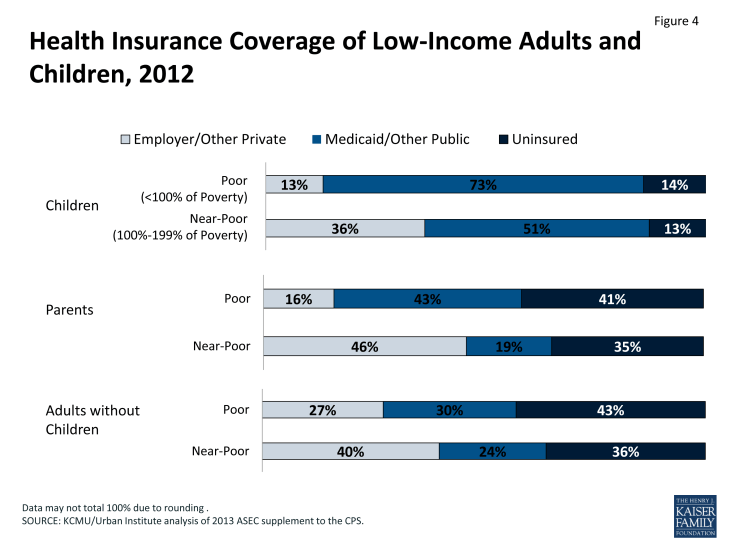 In contrast to coverage for children, the role of Medicaid for nonelderly adults is more limited.  State Medicaid programs are only required to cover parents below states’ 1996 welfare eligibility levels (often below 50% of the federal poverty level).  Most states have much lower income eligibility for parents than for children.  In addition, although Medicaid covers some parents and low-income individuals with disabilities, most adults without dependent children—regardless of how poor—are ineligible for Medicaid.  As a result, four out of ten (41%) of poor parents and 43% of adults without children are uninsured.  The Medicaid expansion in the ACA provides a new coverage pathway for millions of currently uninsured adults.

The ACA will extend Medicaid to many individuals at or below 138% of poverty starting in 2014.17  The ACA will expand Medicaid to adults without dependent children as well as parents who were previously ineligible because of low eligibility thresholds for parents.  The June 2012 Supreme Court decision effectively made the Medicaid expansion optional for states, and as of September 30, 2013, 24 states and the District of Columbia have indicated they are moving forward with the expansion.18 Undocumented immigrants and lawfully present immigrants who have been in the U.S. for less than five years will continue to be ineligible for Medicaid.19