The 2016 presidential campaign season and the first year of Donald Trump’s presidency brought increased attention to political activism with media images of large campaign rallies and protests and marches across the country. In order to understand the public’s views of activism and gauge how widespread this activity was, the Washington Post and the Kaiser Family Foundation conducted a representative survey of adults in the United States. The survey explored the public’s attitudes of protests and rallies, particularly in light of 2018 being 50 years after 1968 – a year fraught with protests over the Vietnam War and assassinations – and included a special focus on those who say they have attended a protest or rally in the past two years, exploring what’s driving them off the couch and out of the house. The Washington Post’s articles featuring the survey data can be found here. In addition, some of the key findings are summarized below.

A Spectrum of Political Activism

Overall, a fifth of the public say they have attended a political rally, speech, or campaign event or an organized protest, march, or demonstration since 2016, referred to here as rallygoers. Others have participated in different types of activism, including 26 percent – referred to here as “nuts and bolts activists” – who say that in the past two years they have worked or volunteered for a political party, candidate, or campaign, or a group that tries to influence government policy on issues they care about, or that they have done at least three of the following other types of activism: contacted an elected official, donated money, signed petitions, boycotted, or wore clothing about an issue or candidate they care about. Over half of the public (55 percent) are less engaged, either because they report participating only in one or two political activities in the past two years (26 percent) or because they’re not active in any of these specific ways (29 percent). 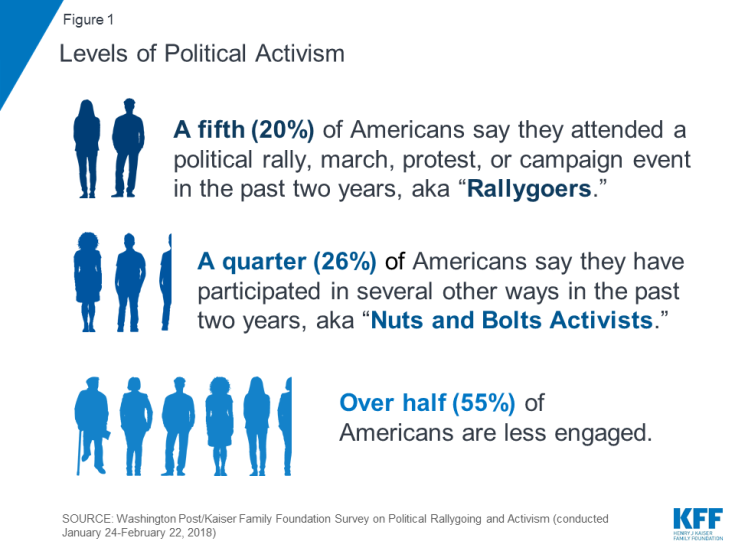 Looking more specifically at the types of political activities the public may have engaged in during the past two years, similar shares of rallygoers and nuts and bolts activists say they have signed petitions, contacted elected officials, and bought or boycotted a product or service. Those who are less engaged are less likely to have done each of these activities.

Social media is another way that the public engages in politics and policy. Rallygoers are more likely than nuts and bolts activists to say they are using social media at least a few times a week to connect with people who share their views on political or social issues, express their views on political campaigns or social issues, and post links to political stories or articles for other to read. To a lesser extent, nuts and bolts activists also report engaging in these activities, but still more than those who are less engaged. 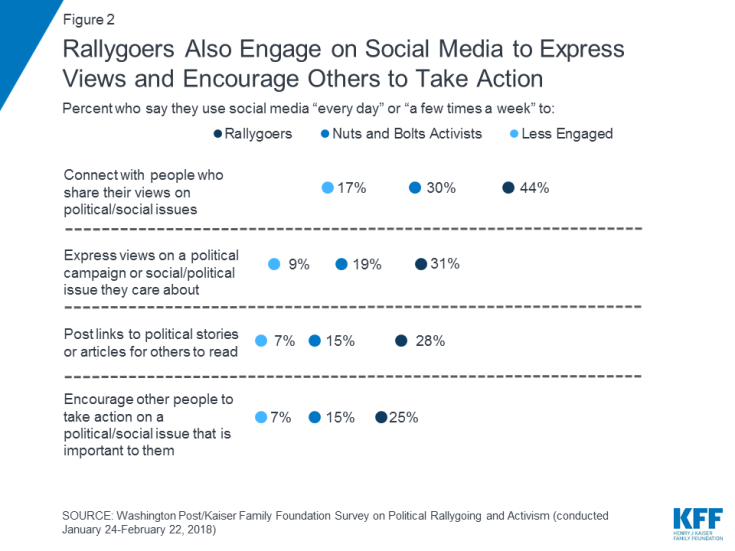 Figure 2: Rallygoers Also Engage on Social Media to Express Views and Encourage Others to Take Action

Who are the Rallygoers and Nuts and Bolts Activists? 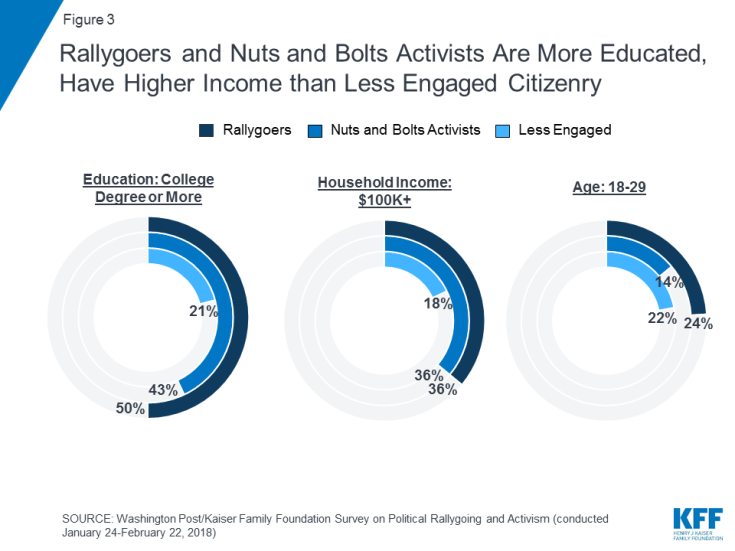 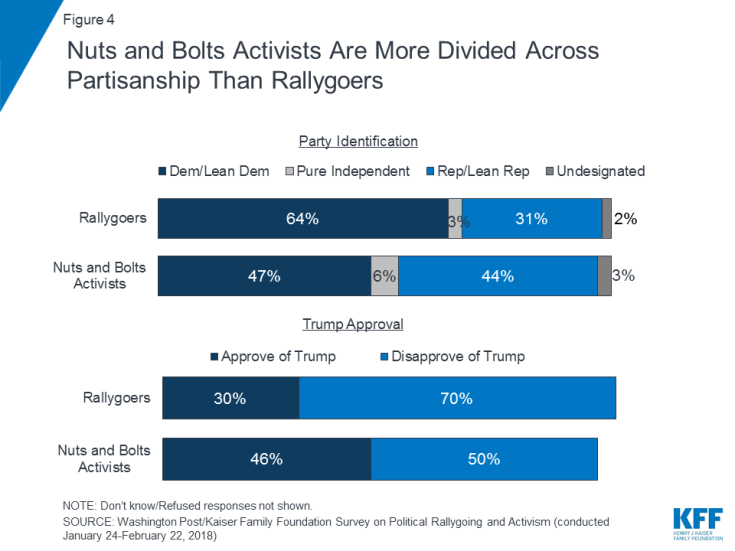 Figure 4: Nuts and Bolts Activists Are More Divided Across Partisanship Than Rallygoers

In terms of how this political activism will play into the 2018 midterm elections, similar shares of rallygoers (83 percent) and nuts and bolts activists (84 percent) say they are “absolutely certain” they will vote in the 2018 congressional election, while less than half of those less engaged (44 percent) say the same. But, rallygoers are more likely to say that they plan to become more involved in political causes or work or volunteer for a political campaign or candidate this year. For example, a third of rallygoers (32 percent) intend to volunteer or work for a political party or campaign ahead of the 2018 election – two times the share of nuts and bolts activists (16 percent). 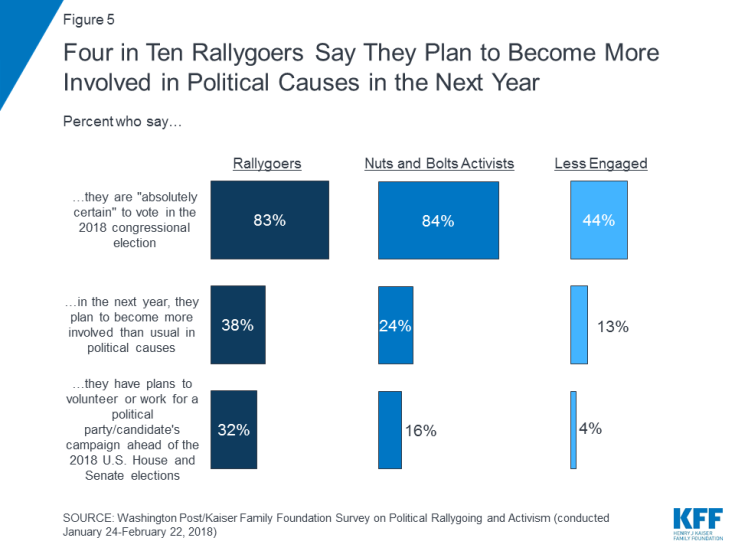 Figure 5: Four in Ten Rallygoers Say They Plan to Become More Involved in Political Causes in the Next Year

What’s Getting Rallygoers Out of the House?

President Trump was a key motivator for many rallygoers. About half of rallygoers (52 percent), or 10 percent of the public overall, say they attended a rally or protest in support of Donald Trump (19 percent) or in opposition to him (32 percent). 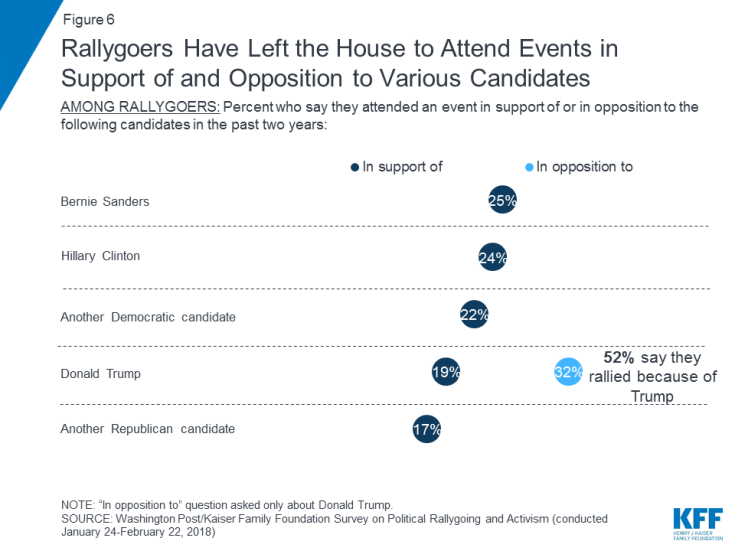 Figure 6: Rallygoers Have Left the House to Attend Events in Support of and Opposition to Various Candidates

Another key motivator were social and political issues. For example, 46 percent of rallygoers say they came out to express their views in support of women’s rights. In addition, roughly 3 in 10 say issues like the environment or energy (32 percent), immigration (30 percent), the Affordable Care Act (28 percent), or LGBTQ issues (28 percent) brought them out to express their views. It’s important to note, the survey was conducted in January and February, before the marches on gun violence after the Parkland, Florida high school shooting and protests and rallies about increased U.S. border enforcement measures. 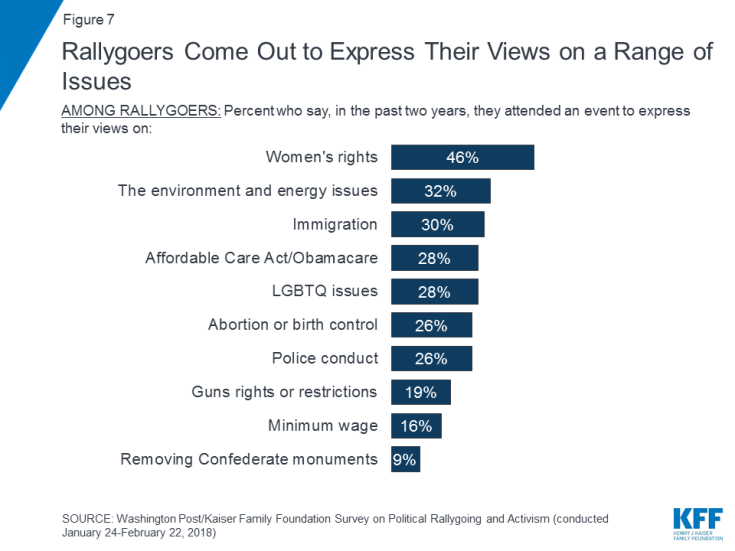 Figure 7: Rallygoers Come Out to Express Their Views on a Range of Issues 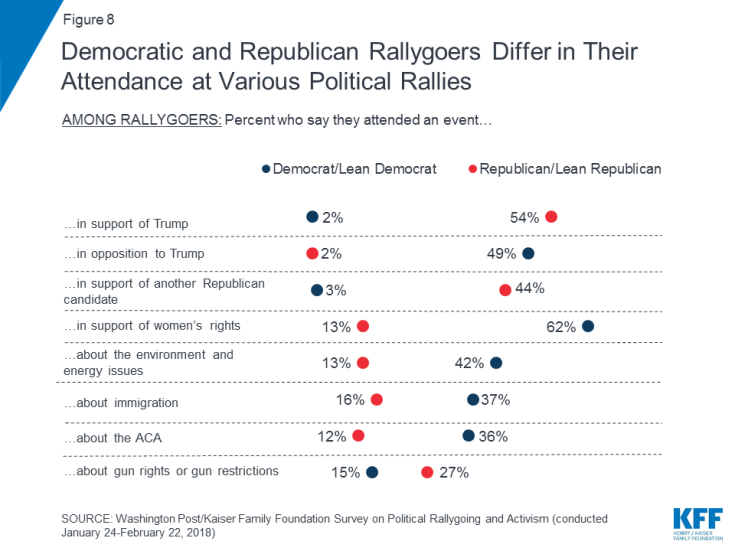 Figure 8: Democratic and Republican Rallygoers Differ in Their Attendance at Various Political Rallies

Are Rallygoers More or Less Active Than in the Past? 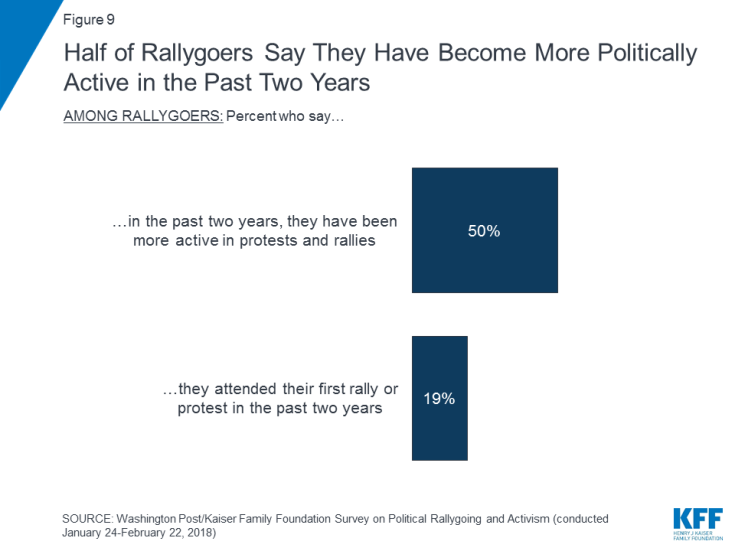 Figure 9: Half of Rallygoers Say They Have Become More Politically Active in the Past Two Years

Those coming out to express their views on the ACA are a particularly motivated group of rallygoers.1 They are much more likely than rallygoers who came out to express their views on other topics to say they will be active in the midterms. For example, 54 percent say they plan to become more involved than usual in political causes in the next year and 53 percent say they plan to volunteer or work for a political party or a candidate’s campaign ahead of the 2018 midterm election. 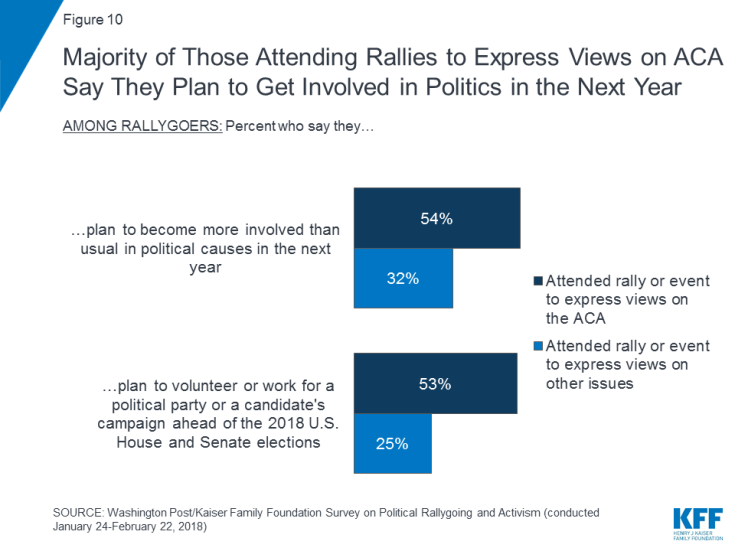 Figure 10: Majority of Those Attending Rallies to Express Views on ACA Say They Plan to Get Involved in Politics in the Next Year

Much of the activism around health in 2016 and 2017 focused on the ACA due to the debate about the future of the law throughout the 2016 election and the 2017 debate about repealing and replacing the law. However, now in the lead-up to the 2018 midterms, there has been more discussion in Democratic campaigns of a single-payer plan, in which all Americans would get their health insurance from a single government plan. Overall, about half of the public supports a single-payer plan, whereas 43 percent oppose it. More rallygoers are supportive of single-payer, due in part to their Democratic leanings, as 83 percent of Democratic or Democratic leaning rallygoers support a single-payer plan. While the public is open to the idea of single-payer, other Kaiser polling has shown that views can change once supporters are presented with counter arguments.2 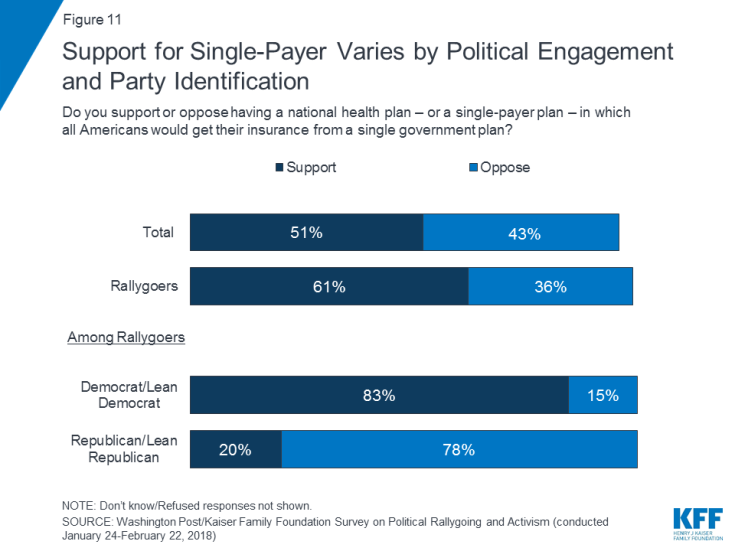 Views of How Protesters Have Changed

Fifty years after the tumultuous late 1960s, a time characterized by the civil rights movement, protests of the Vietnam War, and assassinations, the public more often feels that people who participate in rallies and protests today have become more extreme in their views, violent, organized, and effective in getting their voices heard, rather than less or about the same. For example, 49 percent of the public says that compared to the late 1960s, people who participate in protests or rallies these days are more violent, whereas 17 percent says they are less violent and 31 percent says they’re about the same.

Interestingly, older adults (65 or older) who lived through the 1960s are somewhat more likely to say things are more violent now (64 percent) and that protesters now are more extreme in their views (56 percent). 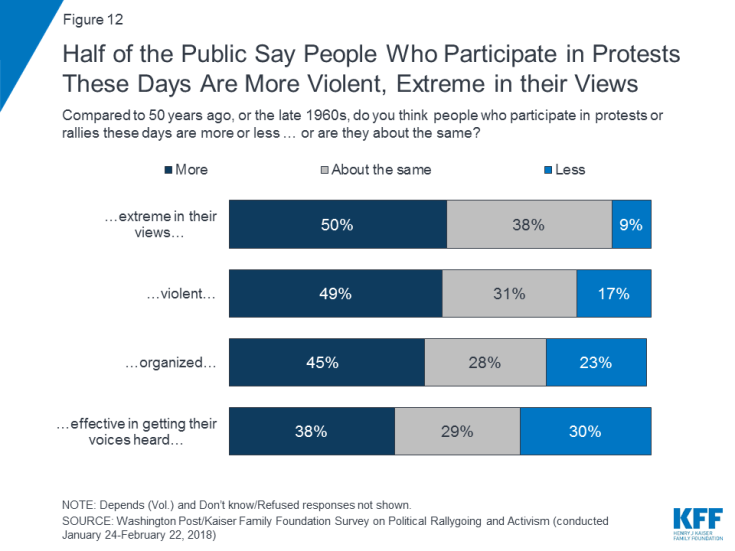 Figure 12: Half of the Public Say People Who Participate in Protests These Days Are More Violent, Extreme in their Views

Limits to the First Amendment

Majorities of the public feel it is never appropriate to protest by blocking cars from driving on the road or highway (84 percent), burning the American flag (81 percent), disrupting another group’s rally (75 percent), or kneeling during the national anthem (53 percent). Republicans are more likely to say various actions are never appropriate than Democrats, but still majorities of Democrats agree, with the exception of kneeling during the national anthem, where 66 percent of Democrats say it is appropriate. 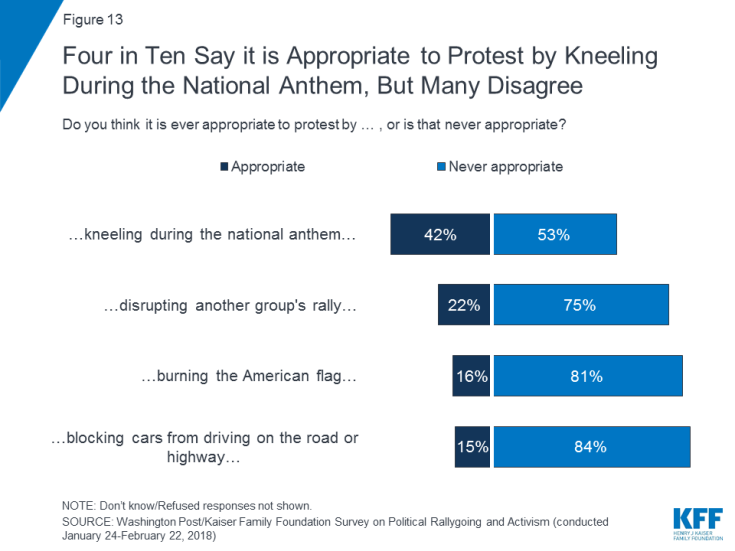 Figure 13: Four in Ten Say it is Appropriate to Protest by Kneeling During the National Anthem, But Many Disagree 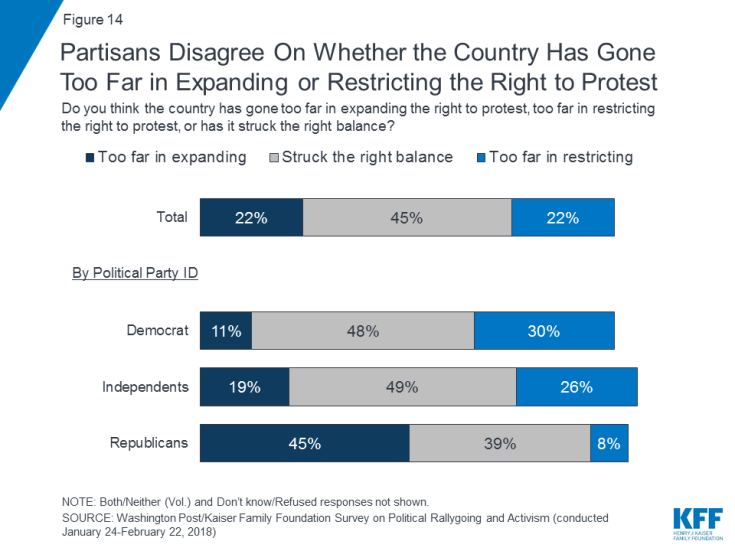 Figure 14: Partisans Disagree On Whether the Country Has Gone Too Far in Expanding or Restricting the Right to Protest 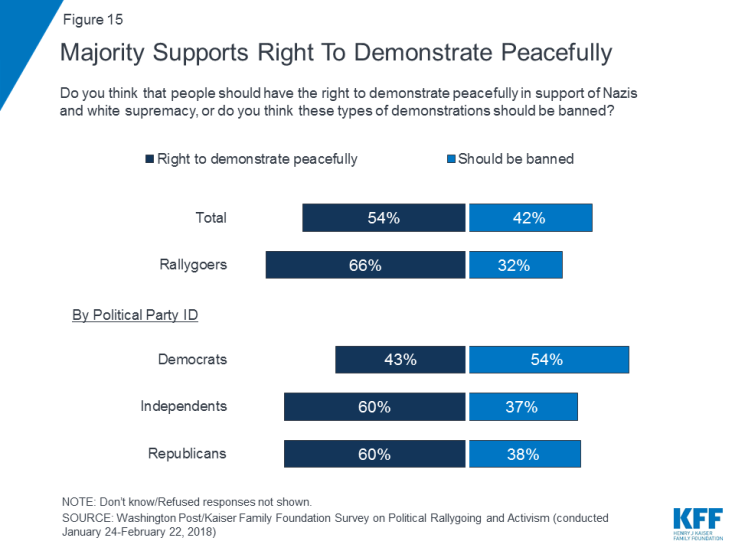 Reasons Some are Staying Home 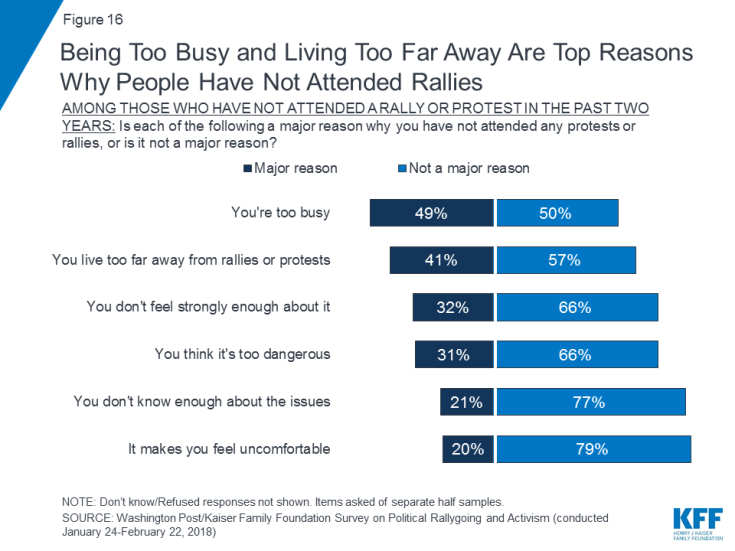 Figure 16: Being Too Busy and Living Too Far Away Are Top Reasons Why People Have Not Attended Rallies