Medicaid, the nation’s public health insurance program for low-income people, covers health and long-term care services for over 66 million Americans. Medicaid beneficiaries include many children, working families, low-income elderly, and individuals with disabilities. To participate in Medicaid, states are required to meet federal core requirements; however, states have significant flexibility to expand beyond program minimums for benefits and coverage, to determine how care is delivered and to determine what and how providers are paid.  As a result of this flexibility, there is significant variation in Medicaid programs across states.  Beyond policy choices, other factors such as a state’s ability to raise revenue, the need for public services, the health care markets in which Medicaid operates as well as the policy process all lead to variation in Medicaid programs and spending.  While the program structure is designed to promote flexibility and variation in Medicaid across states, the extent of this variation is not well understood.  This brief examines variation in spending per enrollee across eligibility groups, across states and over time, as well as implications for program policy and financing.

How Does Medicaid Per Enrollee Spending Vary Across Eligibility Groups and States? 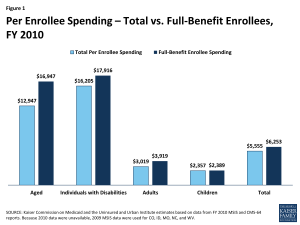 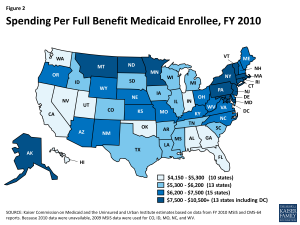 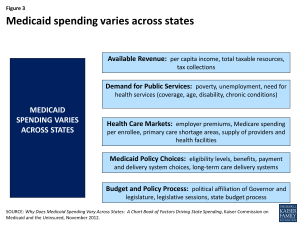 The reasons for this variation are not uniform or easy to explain.  Variation is the result of a complex set of factors that include state policy choices (who is eligible, what benefits are covered, how services are paid for and delivered) as well as the availability of revenues, demand for service, health care markets and state budget and policy processes.1  (Figure 3).

Average per enrollee spending varies significantly across states and also across eligibility groups.  Per enrollee spending is higher for the aged and individuals with disabilities and lower for adults and children eligibility groups.  The aged and individuals with disabilities use more complex acute care services as well as long-term care services.  Spending per aged enrollee ranges from a low of $10,101 in California to a high of $31,318 in Connecticut; from $9,099 in Alabama to $33,552 in the New York for disabled enrollees; from $2,032 in California to $6,928 in New Mexico for adult enrollees and from $1,575 in Indiana to $4,804 in Alaska for children.  (Figure 4). 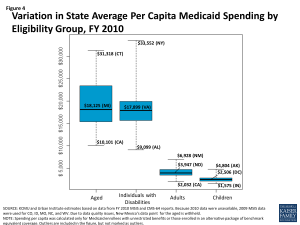 How Has Growth In Medicaid Per Enrollee Spending Varied Across Eligibility Groups and States? 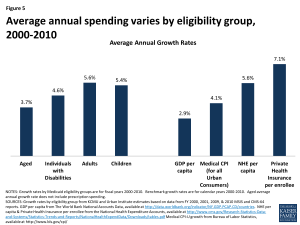 As described above, the levels of per enrollee spending vary considerably across eligibility groups.  While not as dramatic, per enrollee spending growth rates also vary across groups.  Looking at average annual spending growth for per enrollee spending by eligibility group – spending for the aged, excluding prescription drug spending, grew more slowly than other groups over the period.2  Spending for children and adults grew faster than other groups, however, these groups are typically lower cost groups than the aged and individuals with disabilities.  Growth in Medicaid spending per enrollee from 2000 to 2010 was generally greater than GDP and Medical CPI, but lower than measures of private health care spending per capita as measured by NHE per capita and private health insurance per enrollee.  (Figure 5).3 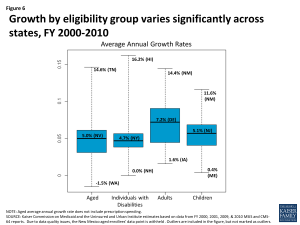 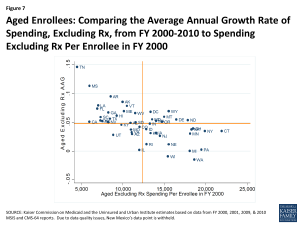 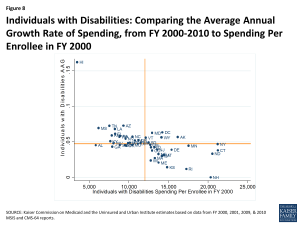 Figure 8: Individuals with Disabilities: Comparing the Average Annual Growth Rate of Spending, from FY 2000-2010 to Spending Per Enrollee in FY 2000 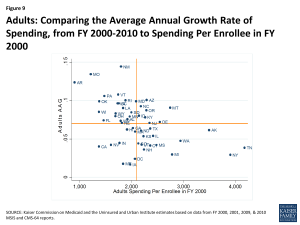 Figure 9: Adults: Comparing the Average Annual Growth Rate of Spending, from FY 2000-2010 to Spending Per Enrollee in FY 2000

Why Does Variation in Spending Matter?

Over the last several years there has been an intense focus on federal deficit reduction.  A number of proposals ranging significantly in scope have been related to reducing federal spending for Medicaid.  Currently Medicaid provides an entitlement to coverage to individuals who are eligible for coverage as well as an entitlement to states to federal matching funds without a pre-set limit, and some of these proposals would change this federal commitment to financing the program or the underlying financing structure of the program. 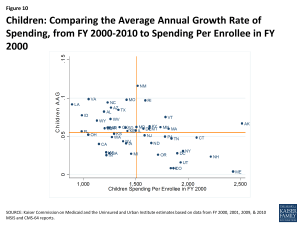 Figure 10: Children: Comparing the Average Annual Growth Rate of Spending, from FY 2000-2010 to Spending Per Enrollee in FY 2000

Proposals that limit federal Medicaid financing have also been tied to national growth targets such as GDP plus a percentage or CPI plus population growth; however, as we can see from this analysis spending growth varies significantly across states and eligibility groups, which would not be captured with nationally set growth limits.  Given that this analysis shows that spending per enrollee in the base year is correlated with the growth rate, applying a national growth rate would result in a widening over time in federal financing to states that had low base-year spending per enrollee and states that had high base-year spending per enrollee.

This analysis shows that there is considerable variation in Medicaid per enrollee spending across states, across groups of enrollees and even within groups of enrollees within a state.  The analysis also shows wide variation in average annual growth rates for per enrollee spending across states.  This variation is multi-faceted and complex.  Variation in Medicaid spending and growth patterns reflects the inherent flexibility built into the program for states to make policy choices to administer their programs within broad federal rules.  Beyond policy choices, other factors such as a state’s ability to raise revenue, the need for public services, the health care markets in which Medicaid operates as well as the policy process all lead to variation in Medicaid programs and spending.  Understanding the complexity of this variation is critical to understanding Medicaid and also to understanding that federal policy changes, particularly those that would alter the underlying financing structure of the program, inevitably would have dramatically different effects on different states.