This 15th annual 50-state survey provides data on Medicaid and Children’s Health Insurance Program (CHIP) eligibility, enrollment, renewal and cost sharing policies as of January 2017, and identifies changes in these policies in the past year. (See Appendix Tables 1-21 for state data.) As discussion of repeal of the Affordable Care Act (ACA), broader changes to Medicaid, and reauthorization of CHIP unfolds, this report documents the role Medicaid and CHIP play for low-income children and families and the evolution of these programs under the ACA. The findings offer an in-depth profile of eligibility, enrollment, renewal, and cost sharing policies in each state as of January 2017, providing a baseline against which future policy changes may be measured. 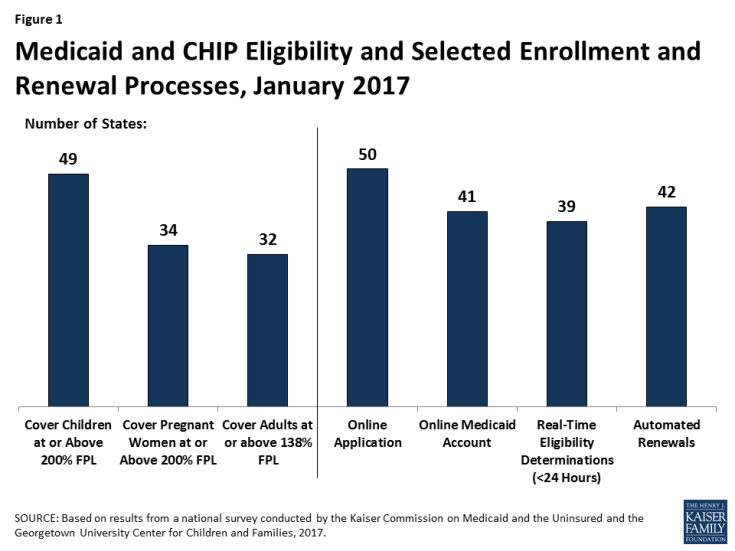 Medicaid’s role for low-income adults broadened under the ACA, with 32 states covering low-income parents and other adults with incomes up to 138% FPL ($16,394 for an individual or $27,820 for a family of three in 2016) under the Medicaid expansion as of January 2017. This count reflects Louisiana’s adoption of the expansion in 2016. In the 19 states that have not expanded, the median eligibility limit for parents is 44% FPL ($8,870 for a family of three as of 2016) and other adults are ineligible regardless of income, except in Wisconsin.

During 2016, states continued to upgrade and streamline Medicaid eligibility and enrollment systems and processes under the ACA, using federal funding available to support system development. As of January 2017, 50 states have an online Medicaid application, 41 states offer online accounts for enrollees to manage their coverage, 39 states make real-time Medicaid eligibility decisions, and 42 states process automated renewals. Moreover, Medicaid systems coordinate or are integrated with Marketplace systems in all states. In 12 of the states with a State-based Marketplace (SBM), there is one system that determines eligibility for Medicaid and Marketplace coverage. The remaining 39 states transfer data back and forth with the Federally-Facilitated Marketplace (FFM), HealthCare.gov, to coordinate eligibility decisions.

This year’s findings build on results from previous years, documenting state policy choices and state implementation of ACA changes to Medicaid, including the expansion to low-income adults and the streamlining of enrollment and renewal processes. Together, these changes have led to increased Medicaid and CHIP enrollment, which has helped to reduce the nation’s uninsured rate to historic lows of 10% for the population under age 65 and 5% for children as of June 2016.1 As discussion of repeal of the ACA, broader changes to Medicaid, and reauthorization of CHIP unfolds, the findings provide a baseline of state policies as of January 2017, against which future policy changes can be measured. Together they suggest:

Given the significant role of Medicaid and CHIP for low-income families across states, changes to these programs could affect coverage for many of the nation’s low-income families. The findings show that Medicaid and CHIP are central sources of coverage for low-income children and pregnant women in all states. Reauthorization of CHIP will have particularly important implications for children and pregnant women given the role CHIP plays complementing Medicaid to support their coverage across states. Loss of CHIP funding could put this coverage at risk and would create funding gaps for states. The findings also show how Medicaid’s role for low-income parents and other adults has broadened in states that implemented the ACA Medicaid expansion. If the Medicaid expansion was eliminated under a repeal of the ACA, many low-income parents and other adults would lose eligibility and potentially become uninsured, depending on what other coverage options may be available. Moreover, broader changes to the financing structure of Medicaid, coupled with reductions in federal Medicaid funding, could affect coverage for all groups of enrollees.

The ACA included changes in Medicaid eligibility, enrollment, and renewal policies and processes in all states, which could be affected by a repeal of the ACA. Under the ACA, all states have implemented new standardized streamlined eligibility, enrollment, and renewal policies, which have yielded modernized systems and processes that reduced paperwork for individuals and administrative burdens on states. Implementing these policies and processes has taken ongoing efforts by states since the ACA was enacted in 2010, with substantial investments of time and resources. It remains to be seen which of these policies or processes could be affected by a repeal of the ACA. However, reverting back to pre-ACA policies or implementing new policies would likely require major investments of time, staff, and resources. Moreover, changes to the Marketplaces could affect Medicaid eligibility systems and enrollment processes because the systems are interwoven in all states.

States are using available program options to expand access to coverage, further streamline enrollment and renewal processes, and charge premiums and cost sharing in Medicaid and CHIP. To date, states have taken up many available program options to expand coverage and further streamline enrollment and renewal processes, particularly for children and pregnant women. Most states also are using options to charge premiums and cost sharing to some Medicaid and CHIP enrollees. In most cases, states target premiums and above-nominal cost sharing to enrollees with relatively higher incomes. The program options available to states, states’ use of these options, and the role of waivers could be affected by a repeal of the ACA or broader efforts to restructure Medicaid.