As outreach efforts for enrollment in the health insurance marketplaces created by the Affordable Care Act (ACA) increase over the summer, the August Kaiser Health Tracking Poll finds that the public’s most trusted sources of information on the law are not necessarily the ones people are most likely to be hearing from. The public is most likely to say they trust health care professionals like doctors, nurses, and pharmacists, as well as federal and state health agencies when it comes to information about the law. Young adults, a key target of outreach efforts, are particularly likely to say they trust official sources of information like state and federal agencies. By contrast, the most common places where people say they’ve actually heard about the law are from the news media, family and friends. A third of the public now says they’ve heard “a lot” or “some” about the health insurance marketplace in their state, up from 22 percent in June. Despite saying they’ve heard about the law from various sources, confusion remains, with more than four in ten saying the law has been repealed or overturned, or being unsure whether it remains the law of the land.  And about half say they don’t understand how the law will impact their own families. While negative views on the law continue to outpace positive ones this month, a majority of the public says they disapprove of cutting off funding as a way to stop the law’s implementation. The most commonly chosen reason for opposition to defunding the ACA is that “using the budget process to stop a law is not the way our government should work,” followed by a belief that “without funding the law will be crippled and won’t work as planned,” and feeling that the law will be “a good thing for the country.”

Doctors And Nurses, Federal And State Agencies Are Most Trusted Sources Of Information On ACA

As the October 1st opening of the ACA’s health insurance marketplaces approaches and outreach efforts ramp up, this month’s Kaiser Health Tracking Poll seeks to understand where the public is turning for information about the law, and which sources of information they trust most. Rising to the top of the list of trusted sources are doctors and nurses (44 percent say they would trust them “a lot” for information about the law), federal agencies (34 percent), state agencies (33 percent) and pharmacists (30 percent). About one in five say they would put a lot of trust in information from employers (21 percent), churches (21 percent), non-profit and community organizations (20 percent), and family and friends (18 percent), while fewer feel this way about health insurance companies (15 percent) and the news media (8 percent). At the bottom of the list, just 3 percent say they would trust information about the ACA from social networking sites “a lot.” 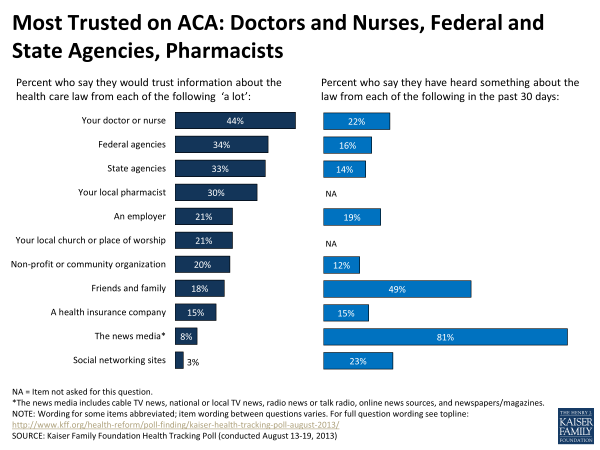 Young adults, who have been a key target of outreach efforts and whose participation in the ACA’s health insurance exchanges is seen by many as important to the law’s success, are even more likely than their older counterparts to have confidence in official sources of information about the law. Nearly half of 18-25 year-olds and almost four in ten 26-35 year-olds say they would put “a lot” of trust in information about the ACA from federal and state agencies.

Trust in official sources also divides along partisan lines, with Democrats more than twice as likely as Republicans to say they would trust federal agencies “a lot” (47 percent versus 21 percent). The partisan gap in trust of state agencies is somewhat narrower, but still substantial (41 percent versus 24 percent).

While health professionals and state and federal agencies top the list of trusted information sources on the ACA, the top places where people report actually getting information about the law are the news media (81 percent say they’ve heard about the law from this source in the past month) and family and friends (49 percent), both of which rank lower in terms of the public’s trust.

Behind the news media and family and friends, roughly two in ten say they’ve heard about the law from social networking sites like Facebook or Twitter (23 percent), a doctor or other health professional (22 percent), letters or brochures in the mail (20 percent), an employer (19 percent), and TV shows like “The Daily Show with Jon Stewart” (19 percent). Fewer, but still more than one in ten, say they’ve gotten information from federal agencies (16 percent), email subscriptions (16 percent), health insurance companies (15 percent), posters or billboards (15 percent), state agencies (14 percent), and non-profit groups (12 percent). Less common sources include online videos, mobile apps, and door-to-door visits.

Many Young People Report Getting ACA Information From Social Networking Sites, But Trust In This Information Is Low Across All Age Groups

Nearly a quarter of the public (23 percent) say they have heard something about the ACA from social networking sites like Facebook or Twitter in the past month. Not surprisingly, younger adults are much more likely than their older counterparts to say they have gotten information this way. Still, even among those ages 35 and under, higher shares report getting information from news media and friends and family than from social networking sites. While young adults are more likely to say they have gotten information from these sites, trust in them as a source of information is low across all age groups, with fewer than 5 percent in any age group saying they trust them “a lot.”

Over A Third Report Actively Seeking Out Information On The ACA 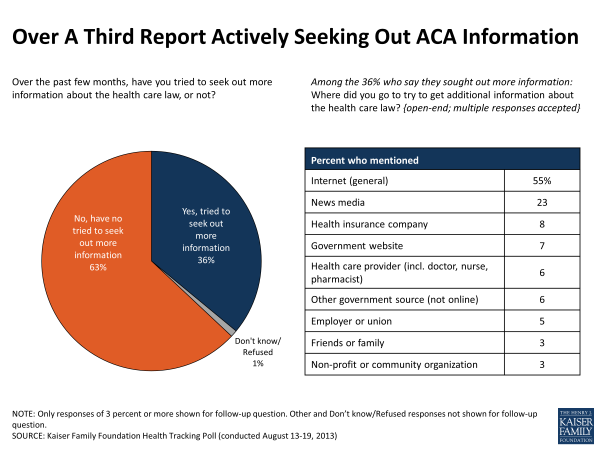 One in ten Americans (10 percent) say they have been personally contacted by someone about the health care law through a phone call, email, text message, or door-to-door visit. The share who report being contacted is similar among some key target groups, including the uninsured and those with lower incomes.

Roughly half the public (51 percent) continues to say they don’t have enough information about the ACA to understand how it will impact them and their family, a share that has been fairly steady since 2010. The share who feel they don’t have enough information is particularly high among Hispanics (64 percent), the uninsured (62 percent), young adults (62 percent of those ages 18-25), and those with lower incomes (60 percent of those with family incomes less than $40,000 a year).

Further, a large share remains confused about the law’s status, with 44 percent either thinking the law has been repealed (8 percent), overturned by the Supreme Court (5 percent), or unsure whether it remains the law or not (31 percent). 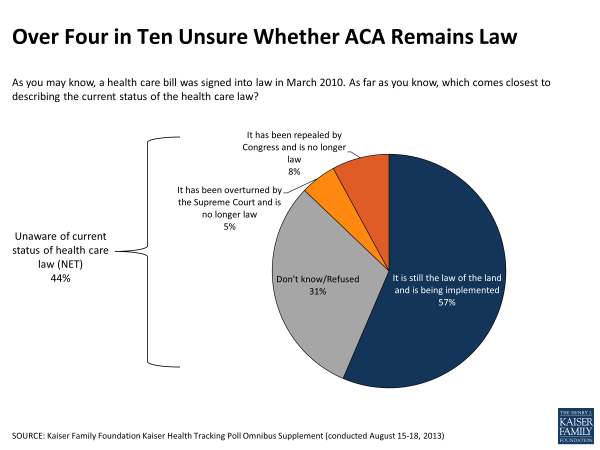 Opinion On ACA Continues To Tilt Negative, But Majority Disapproves Of Defunding

Public opinion on the ACA as a whole continues to tilt negative this month, with 37 percent saying they have a favorable view of the law and 42 percent expressing an unfavorable view, shares that have held relatively steady since February of this year. 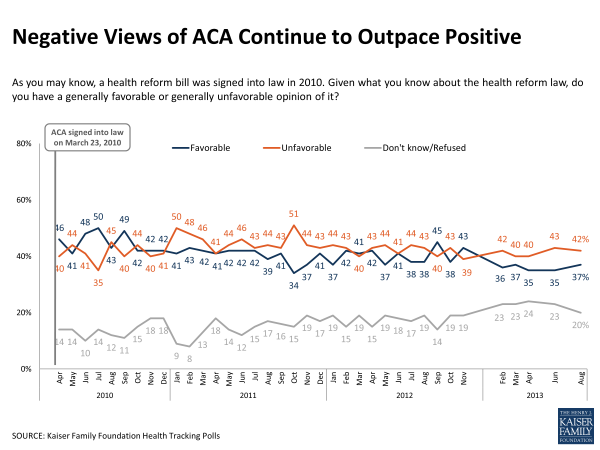 Still, a majority of Americans (57 percent) say they disapprove of the idea of cutting off funding as a way to stop the law from being implemented, a finding that has been consistent in Kaiser Health Tracking Polls since January 2011. Republicans and those with an unfavorable view of the law overall are more likely to approve of attempts to defund the ACA, but even among these groups, about a third (34 percent and 33 percent, respectively) say they disapprove.

The most commonly chosen reason for opposition to defunding the ACA is that “using the budget process to stop a law is not the way our government should work,” (named as a major reason by 69 percent in this group), followed by a belief that “without funding the law will be crippled and won’t work as planned,” (56 percent) and feeling that the law will be “a good thing for the country” (49 percent). Fewer (35 percent) say their main reason for opposing defunding efforts is that they’ve “heard enough about the health care law and it’s time to move on to something else.” 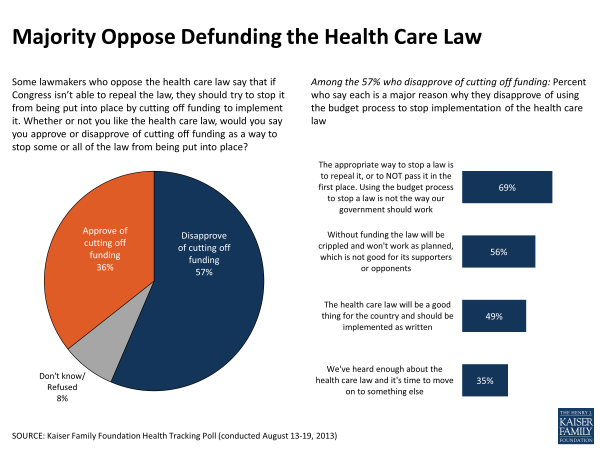 This month’s survey also sought to shed light on previous experiences that might be relevant for navigating the ACA’s health insurance exchanges. Overall, about half the public reports having ever compared across health insurance policies to choose a plan, a share that is somewhat lower among the uninsured, those with lower incomes, blacks and Hispanics, and those ages 18-25. Furthermore, a quarter of the public overall either buys their own insurance now or has tried to do so in the past three years, and this experience is actually more common among the uninsured and those with lower incomes.

Most of the public (72 percent) says they have purchased a product online at some point, and over a third (35 percent) say they do this “often.” About six in ten (61 percent) say they’ve used the internet to access health information, including a quarter who report doing so “often.” The uninsured, Hispanics, and those with lower incomes are somewhat less likely to report experience with online purchases and accessing health information, while young adults are more likely to say they often buy products online.

Public Divided On Health Insurance Industry As A Whole, But Favorable About Their Own Insurance Company

Asked how they think the ACA will impact insurance companies, a third (33 percent) think the law will leave them worse off, while about three in ten each say these companies will be better off under the law (28 percent) or see no difference (28 percent).

This month’s tracking poll asked what people value most in a health plan. Between a third and four in ten rated all factors we asked about – including having a comprehensive, affordable plan with good customer service, minimal paperwork, and low cost-sharing – as “extremely important”. But when forced to choose which aspect is most important, the ability to see one’s own doctor (17 percent) and having a plan that covers a wide range of services (12 percent) rise slightly higher than other factors. 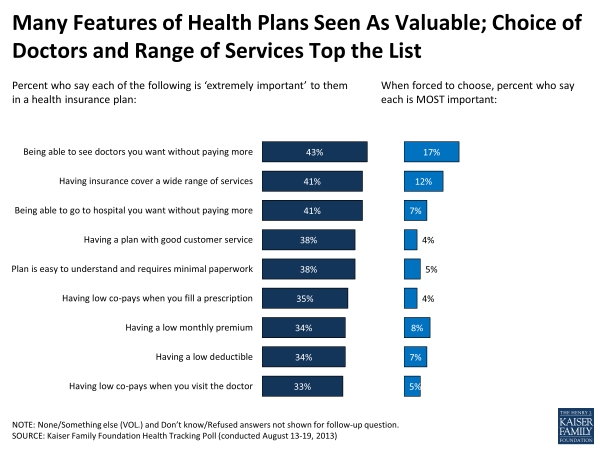 Asked specifically what they like best about their policy, a third of the insured (34 percent) mentioned cost-related factors like low out of pocket expenses or low premiums and a quarter (26 percent) named comprehensive benefits and prescription drug coverage.

While many seem to enjoy low costs as the best feature of their plan, a similar share name high costs as the worst feature. A third of the insured (33 percent) say that high cost sharing or rising premiums are the things they like least about their policy, a figure that rises to two-thirds (63 percent) among those who purchase their own insurance.