Coverage and Care Pathways for People with HIV: A New Baseline

This new baseline provides a snapshot of access to care and coverage for people with HIV today and serves as marker for gauging changes going forward. It reflects coverage gains associated with the Affordable Care Act’s (ACA) expansions as well as access through traditional insurance pathways and the Ryan White program.

People with HIV saw significant gains in insurance coverage under the healthcare law,1 through Medicaid expansion, the creation of health insurance marketplaces, and the elimination of insurance barriers, including pre-existing condition exclusions. At the same time, many continue to rely on the traditional Medicaid program, as well as the Ryan White HIV/AIDS program, the nation’s safety net for people with HIV who are underinsured and uninsured. In addition, even with the ACA’s expansions, state decisions have resulted in significant variation in access to coverage across the nation.

As debate over the future of the ACA continues, this baseline offers one tool for assessing changes made to the coverage landscape moving forward.

To develop the baseline, we identified eight state level variables across the three main pathways of coverage and access to care for people with HIV – Medicaid, private insurance/the marketplace, and Ryan White – and included data from all 50 states and DC. (See Table 1 for a list of all variables and the Appendix for a look at state-by-state status).  While all eight variables are important, we further identified a subset of four variables, which, together, have the greatest bearing on access to care and coverage for people with HIV: Medicaid expansion status, Medicaid eligibility levels through the disability pathway, the average number of issuers per county in the state marketplace, and Ryan White ADAP eligibility level. We used these four variables to identify states that had “enhanced levels of access” for people with HIV. Below we provide findings for these four primary variables, followed by detailed findings across all measures. 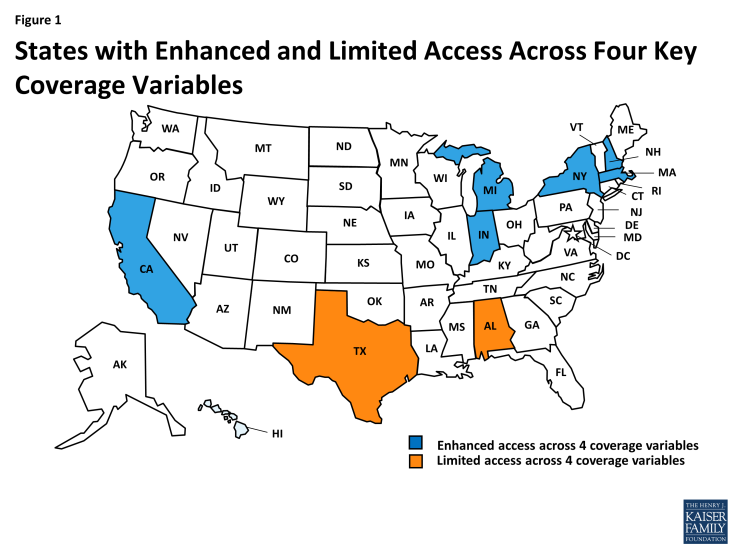 Looking across the four key variables, States were considered to have enhanced levels of access for people with HIV if they: had adopted the Medicaid expansion; offered traditional Medicaid disability coverage above the mandated SSI level (73% FPL); had an average of 3 or more issuers per county in their marketplace; and had an ADAP (medication assistance) eligibility level at or above 400% FPL.  Six states (California, Indiana, Massachusetts, Michigan, New Hampshire, and New York) met all of these criteria; together, these six states account for one-third (31%) of all people living with HIV nationwide. None of these six is located in the Southern region of the U.S., a region that that faces significant access challenges and disparities.2  Looking at the two ACA-specific measures (Medicaid expansion and average number of issuers per county), 22 states met enhanced criteria, accounting for 52% of people with HIV.  Two states (Alabama and Texas), accounting for 10% of the nation’s HIV prevalence, have the most limited access and did not meet any of these criteria.  Looking at the four key variables, we found: 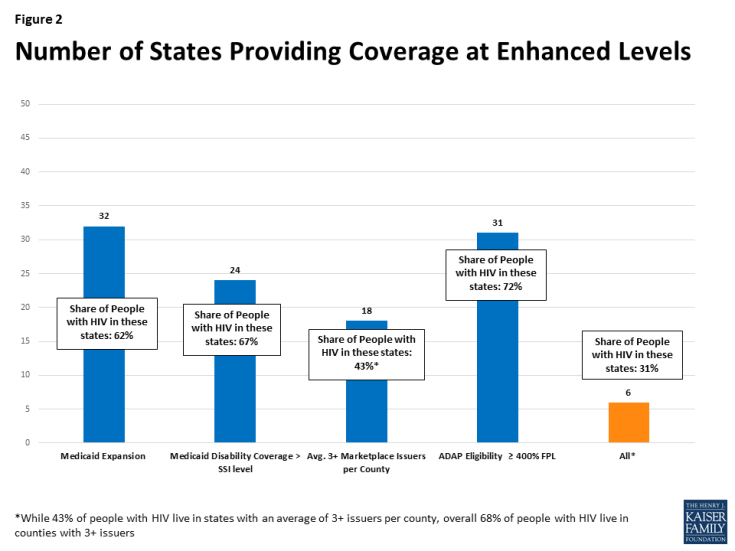 In assessing access to Medicaid, we look at two key pathways to coverage: the traditional program and the ACA’s Medicaid expansion. Prior to the ACA, to qualify for Medicaid enrollees were required to be both low income and “categorically eligible,” such as being disabled or pregnant. During this period, most people with HIV gained Medicaid coverage through the disability pathway, which in many cases meant developing AIDS before becoming eligible (despite it being a preventable diagnosis). The ACA addressed this by doing away with the categorical eligibility requirement and expanding access to individuals based on income alone. As such, access to Medicaid has grown significantly for people with HIV under the health law but as a result of a Supreme Court decision, some states have opted out of the expansion.  For states that did not expand coverage, the disability pathway remains especially critical.  Looking at the Medicaid measures, we find that:

For assessing marketplace access, we looked at the number of issuers available to consumers within the region. Marketplace participation is an indicator of competitiveness and enrollee choice, which can play an important role in ensuring adequate affordable coverage for high needs enrollees. Because consumer out-of-pocket costs can vary significantly by plan, and provider networks and formularies can differ substantially, having a range of plan choices can help people with HIV adequately meet care and treatment needs. We looked at two indicators by state, finding:

The Ryan White HIV/AIDS Program provides outpatient HIV care and treatment to low and moderate income individuals reaching more than half of those diagnosed in the US.4 In the ACA era some individuals may have stopped receiving direct care and treatment through the program, gaining it instead through Medicaid or in the private market. Further, as more people with HIV were able to secure coverage in the private insurance market (given the ACA’s nondiscrimination protections) Ryan White’s role is in assisting clients with the cost of insurance premiums and other out-of-pocket obligations (known as insurance purchasing or insurance assistance) has grown.5  In addition to ADAP, Ryan White also provides a range of outpatient services to people with HIV.

Since Ryan White operates at state and local levels, service eligibility levels and the ability of programs to provide insurance assistance vary. We looked at indicators for the traditional Ryan White Program (medication assistance and HIV care services), those related to assisting individuals with purchasing insurance, and Ryan White’s eligibility for outpatient services more generally.

While recent efforts to repeal and replace the ACA have not been successful, there are still questions about its future, including potential policy and legislative changes. In addition, repeal efforts have included attempts to overhaul the structure and financing of the traditional Medicaid program.6 Depending on their scope, if realized such changes could affect coverage opportunities for people with HIV.78 (For more detailed analysis of the possible impacts of repeal and replace for people with HIV see here.) If such efforts are successful, people with HIV could be forced out of marketplace coverage or off of Medicaid which could cause some to fall out of care. Others may turn to Ryan White for HIV medication and care but the program has limited resources and may not be able to meet all needs. This baseline of coverage access for people with HIV will help us to measure the effect of related policy changes moving forward.