Community health centers provide comprehensive primary care services in some of the most underserved communities in the nation. In 2017, 1,373 health centers operated in over 11,000 sites and served nearly 27.2 million patients.1 Four years following implementation of the ACA’s coverage expansions, health centers continue to play a central role in connecting consumers to expanded Medicaid and marketplace coverage and have experienced significant growth in their service capacity. Assisting community members enroll in health insurance programs for which they may be eligible has long been a core feature of the health centers program.  Building on this commitment, health centers have been actively engaged in the outreach and enrollment efforts under the ACA. In addition, growing revenue associated with improved insurance coverage of health center patients combined with increased grant funding under the ACA, bolstered health centers’ overall financial capacity, enabling them to expand much needed services.2 At the same time, health centers face serious challenges that reflect the poverty and health risks that characterize their patients, challenges related to recruiting sufficient clinical and administrative staff into seriously medically underserved urban and rural communities, and reliance on  two key revenue sources – federal grant funding and Medicaid – that remain vulnerable to political and policy uncertainties.

This issue brief presents findings from the Kaiser Family Foundation and Geiger Gibson Program in Community Health Policy 2018 Health Center Survey to describe health centers’ experiences under the ACA. It provides a snapshot of health centers’ outreach and enrollment activities for the 2018 open enrollment period, describes strategies that health centers implemented to respond to the shortened open enrollment period, and compares the experiences of health centers in Medicaid expansion and non-expansion states. This brief also describes findings on overall operational and financial capacity as well as ongoing challenges. 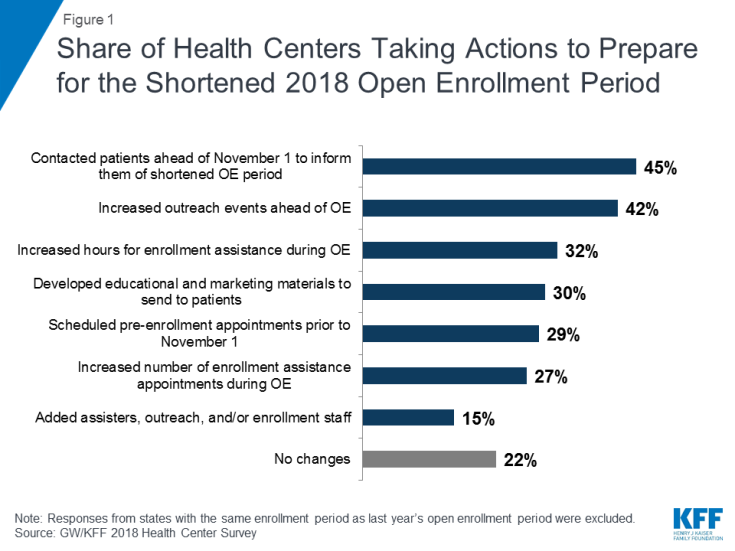 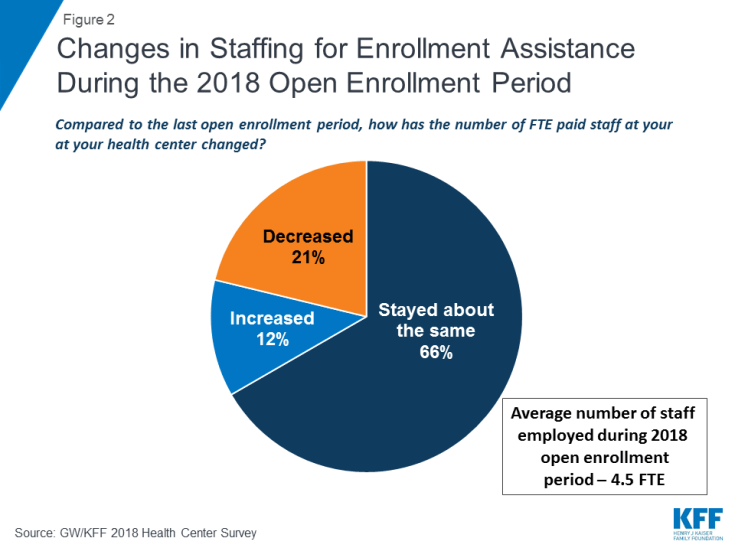 Figure 2: Changes in Staffing for Enrollment Assistance During the 2018 Open Enrollment Period 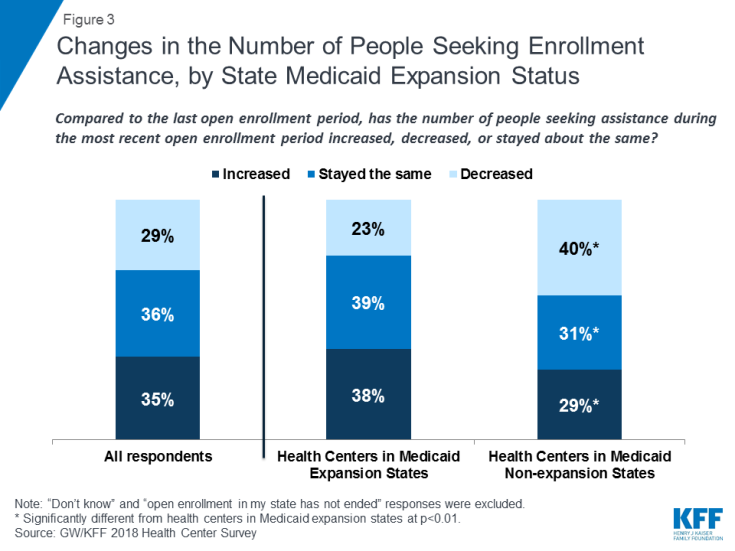 In addition to eligibility assistance, health centers’ outreach and enrollment staff provided a range of services to support consumers seeking health insurance. Nearly three-quarters (72%) of health centers reported counseling consumers on how to use insurance while over six in ten said they provided health insurance literacy counseling, assisted consumers with appeals of eligibility determinations, provided interpretation services, and assisted consumers with post-enrollment problems regarding billing or denied claims (Figure 4). These services are critical to ensuring consumers can understand and use their insurance to access the care they need. About half (52%) of health centers that reported offering these additional services said they spent about the same amount of time engaging in these activities compared to the last open enrollment period, and 34% reported spending more time. 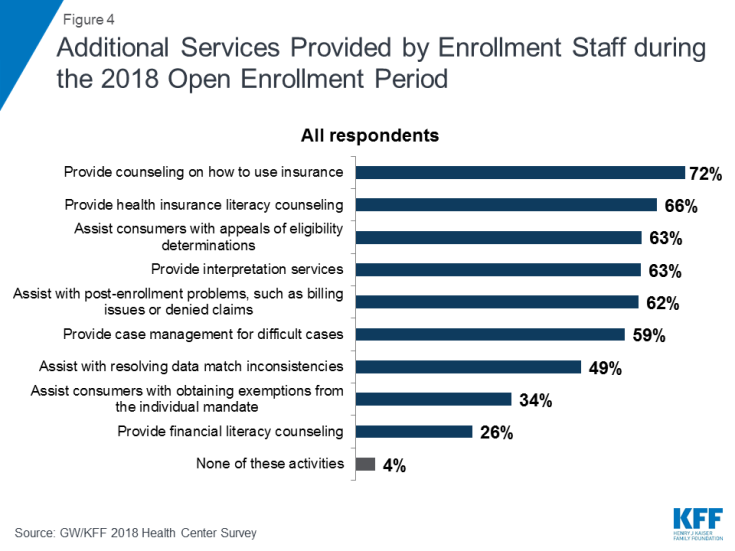 While funding for outreach and enrollment activities has been incorporated into health centers’ federal grants, many health centers received additional state or federal navigator grant funding and some experienced reductions in those grants. Because enrollment assistance is a requirement of all health centers, grants under Section 330 of the Public Health Service Act (which establishes the program) include modest funding for outreach and enrollment.  In addition, about four in ten (38%) health centers also reported receiving navigator funding, either as a grantee or as a sub-grantee, to provide outreach and enrollment services (Figure 5). Of those that reported receiving this funding, over a third (34%) said that their funds were cut in the 2017-2018 funding year, with health centers in Medicaid expansion states twice as likely to report funding cuts as those in non-expansion states (39% versus 20%). Among health centers whose funding was cut, nearly half (45%) said they did not make any changes in response to the funding cuts. However, about a third (32%) said they reduced staff and 27% reduced the number of outreach activities and events. 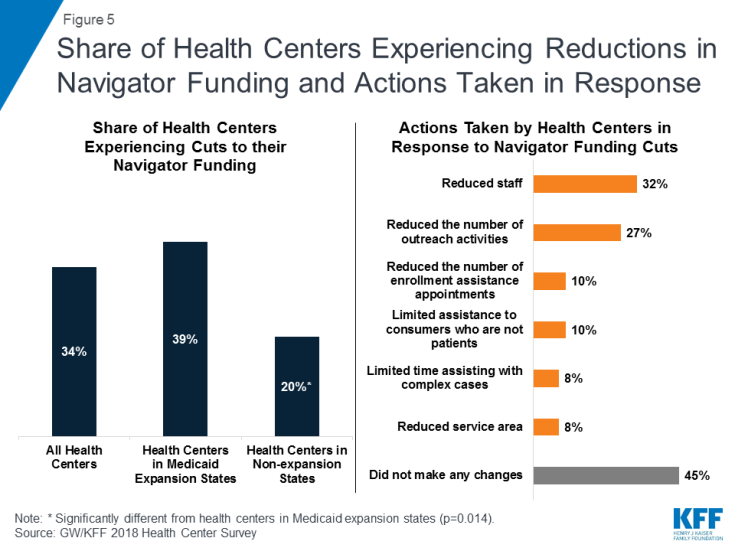 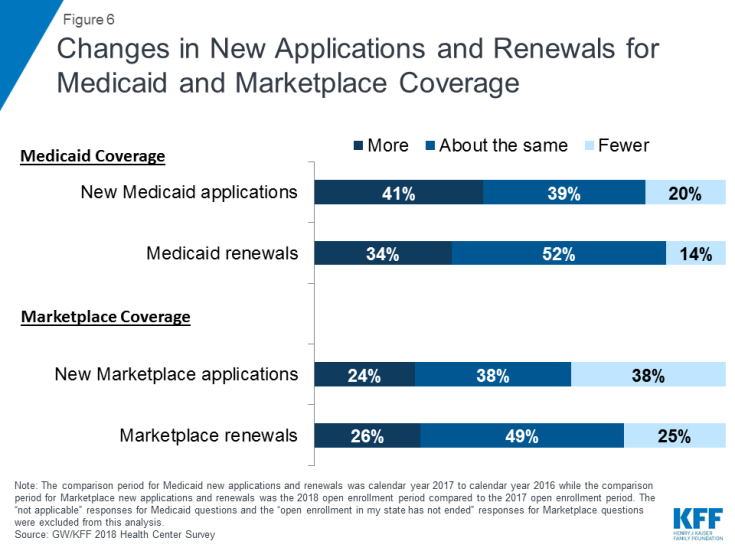 Figure 6: Changes in New Applications and Renewals for Medicaid and Marketplace Coverage 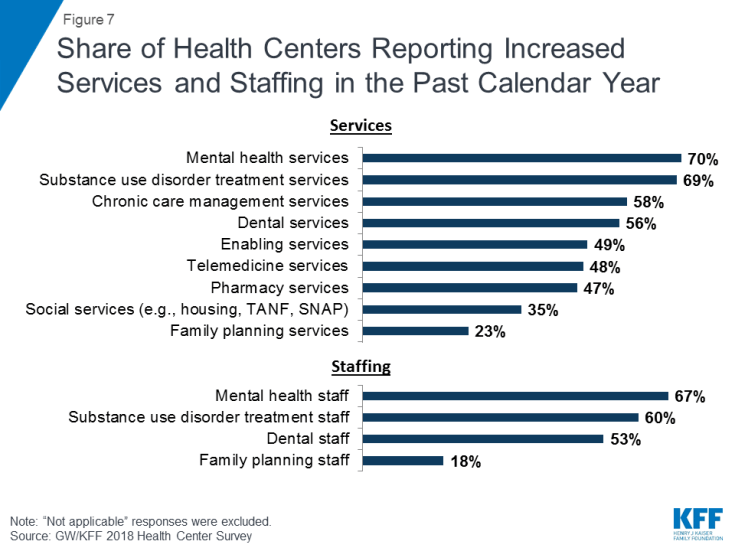 Figure 7: Share of Health Centers Reporting Increased Services and Staffing in the Past Calendar Year

As a result of growing insurance coverage among their patients, most health centers experienced stable or improved financing from key revenue sources in the past year.  Medicaid and Federal Section 330 grants are the most important revenue sources for most health centers, comprising over 60% of total revenues in 2017.7 As Medicaid coverage grew, nearly half (47%) of health centers reported increases in their Medicaid revenue in the past year and an additional 38% reported that their Medicaid revenue did not change (Figure 8). Following the Congressional delay in reauthorizing the Community Health Center Fund in 2017, most health centers reported an increase or no change in their federal grant funding in the past year. Importantly, though, about 20% of health centers experienced a decrease in their federal grant funding. For health centers that are particularly reliant on these grants to finance care to the uninsured, any reductions in funding can affect operations, and the uncertainties created by the delay in reauthorizing grant funds added to the pressures created by grant reliance. These findings were similar for health centers in expansion and non-expansion states. 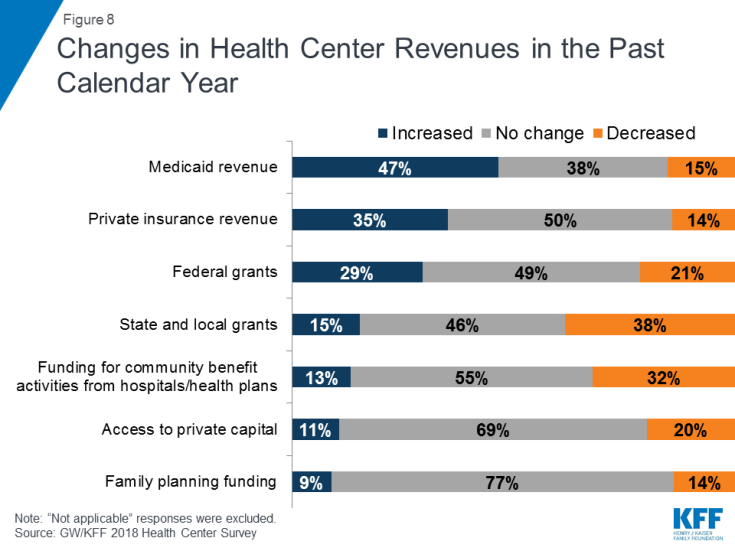 Figure 8: Changes in Health Center Revenues in the Past Calendar Year 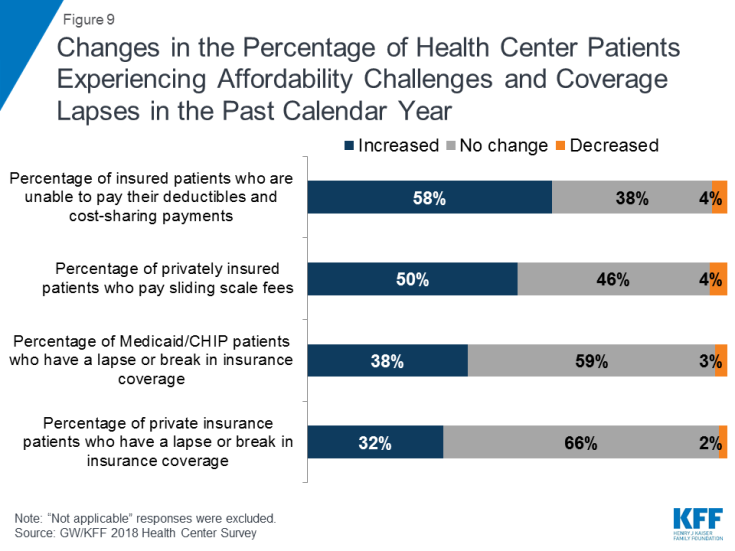 Figure 9: Changes in the Percentage of Health Center Patients Experiencing Affordability Challenges and Coverage Lapses in the Past Calendar Year

Now four years out from the major expansions in Medicaid and marketplace coverage, health centers are continuing to expand their operational capacity amid a relatively stable financial situation. At the same time, health centers remain financially vulnerable because of reliance on funding sources that may be susceptible to policy and political uncertainties, as reflected in the delay in extending ACA grant funds. Consistent with their mission, health centers also report a strong presence in outreach and enrollment activities. Increased insurance coverage for health centers patients, along with enhanced federal grant funding through the ACA have contributed to a significantly improved financial picture for health centers. Health centers report that they are continuing to grow their capacity in terms of staffing, services, number of sites, and hours of operation.  However, as they seek to expand capacity, health centers continue to face workforce recruitment challenges. Furthermore, while many health centers have experienced increased federal grant funding over the past four years (and 29% reported an increase in the past year), for some, particularly those in non-expansion states, the amount they receive is still insufficient to meet rising health care costs overall as well as the ongoing costs of caring for the uninsured. Together, these challenges create additional pressures and constraints on health centers’ ability to maintain their increased capacity to provide services, including their ability to provide outreach and enrollment support.

Health centers also continue to play an important role in outreach and enrollment assistance for low-income consumers. With funding for enrollment activities included in their federal grants, health centers have been able to maintain staffing and eligibility assistance at levels they had previously reported. As a result, health center staff were able to take steps to prepare their patients and community members for the shorter enrollment periods in effect in most states. They also continued to provide essential services beyond enrollment assistance, including counseling on health insurance literacy and how to use insurance, to ensure their clients are able to use their coverage to access needed health care services.

Looking ahead, health centers will remain critical sources of comprehensive primary care services as well as outreach and enrollment assistance in their communities. With the Community Health Center Fund reauthorized, and the ACA coverage expansions still in place, the financial situation of health centers will likely remain stable in the immediate term. However, the uncertainty over future funding remains; any delays in securing funding could cause disruptions to health center operations. Additionally, if the threat to repeal and replace the ACA resurfaces and the ACA were to be repealed, it would jeopardize future health center growth. Finally, 1115 Medicaid waiver proposals in several states to impose work requirements, premiums and cost-sharing, and time limits on benefits, will restrict Medicaid enrollment, which could lead to coverage losses among health center patients, and further add to the financial uncertainty facing community health centers.

Additional funding support for this brief was provided to the George Washington University by the RCHN Community Health Foundation.