Since the Affordable Care Act marketplaces opened in 2014, there have been many changes in insurer participation as companies entered and exited states, or changed their footprint within states. A number of insurers are entering the market or expanding their service area for 2020. This year, 18 states are seeing a total of 26 new entrants (see Table 1) and an additional 54 insurers are expanding their service areas within states.1 There will be an average of 4.5 insurers per state in 2020, up from 4.0 in 2019 and 3.5 in 2018, but down from a peak of 6.0 in 2016. The number of insurers per state ranges from one company each in Delaware and Wyoming to more than ten companies in California, New York, and Wisconsin (see Table 2 in the appendix). In 2020, 67% of enrollees (living in 29% of counties) will have a choice of three or more insurers, up from 58% of enrollees in 2019 and 48% in 2018.2

The map and chart below show how insurer participation has changed from 2014 – 2020 in every county in the U.S. Data for this map are available for download. 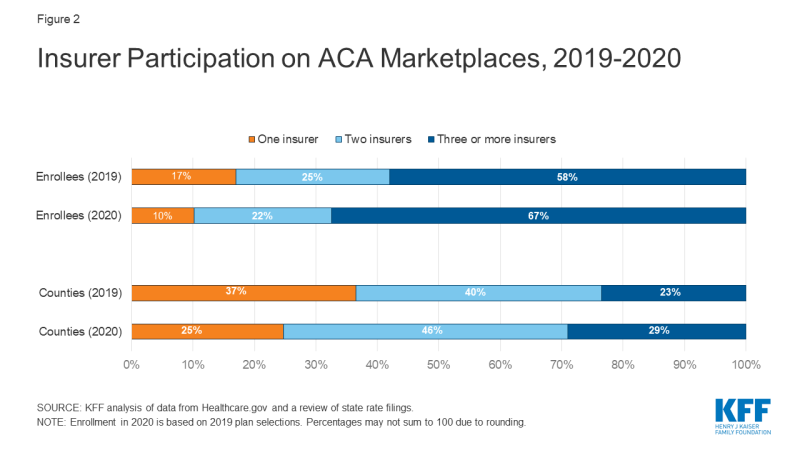 Although there are an average of 4.5 insurance companies per state in 2020, many insurers do not participate statewide. Insurer participation varies greatly within states, and rural areas tend to have fewer insurers. On average, metro-area counties have 2.6 insurers participating in 2020 (up from 2.3 in 2019), compared to 2.0 insurers in non-metro counties (up from 1.8 in 2019). In 2019, 87% of enrollees lived in metro counties.

Going into 2020, 668 counties are gaining at least one insurer, while 18 counties nationwide will lose an insurer (net of any entrances). The map below shows net insurer entrances and exits for 2020 by county.

Despite these expansions and new entrances, there remain a number of areas in the country with just one exchange insurer. In 2020, about 10% of enrollees (living in 25% of counties) have access to just one insurer on the marketplace (down from 17% of enrollees living in 37% of counties in 2019). Often, when there is only one insurer participating on the exchange, that company is a Blue Cross Blue Shield or Anthem plan. Before the ACA, state individual markets were often dominated by a single Blue Cross Blue Shield plan. 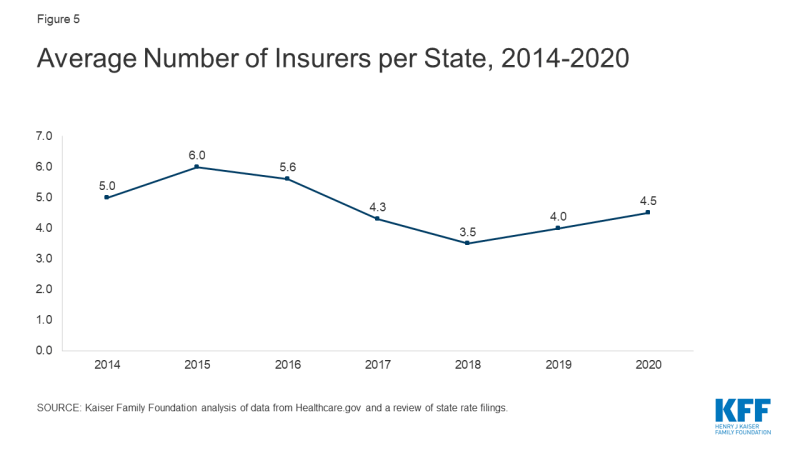 Insurer participation on the ACA Marketplaces will increase in 2020, with an average of 4.5 insurers participating per state, up from 4.0 in 2019. The share of Marketplace enrollees with only one insurer option (10%) will be the lowest since 2016 (when 2% of enrollees had only one insurer option). As was the case in 2019, there are more companies entering into markets or expanding their footprints within states than there are withdrawals in 2020. Nonetheless, the market overall continues to have lower insurer participation than in the early years of ACA implementation.

Data were gathered from healthcare.gov, state-based exchange enrollment websites, and insurer rate filings to state regulators. Companies and related subsidiaries were grouped by their parent or group affiliation using Mark Farrah Associates Health Coverage Portal TM and the Health and Human Services (HHS) Medical Loss Ratio data. Enrollment in states using Healthcare.gov is from HHS (with some adjustments made for counties without reported enrollment). In states running their own exchanges, we gathered county-level data enrollment data where possible and if unavailable estimated county level enrollment based on the state’s enrollment total. 2020 enrollment is estimated using 2019 plan selections. For most states running their own exchange, insurer participation is measured at the rating area level.