The Good and Bad of Those Ubiquitous Drug Ads

In his latest column for The Wall Street Journal’s Think Tank, Drew Altman examines the public’s mixed views about prescription drug ads and their impact on prescribing patterns, based on a new Kaiser Family Foundation survey. All previous columns by Drew Altman are available online. 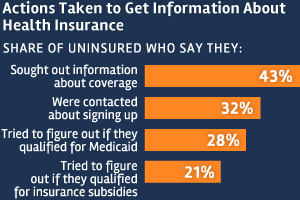 Despite the ongoing debate between Republican lawmakers and President Obama on the future of the 2010 health care law, the January Kaiser Health Tracking Poll finds the Affordable Care Act (ACA) is only one of many issues that may impact voting decisions. While there has been recent focus on improving the value of health care, those with insurance under 65 years old largely say the health care services they receive are at least a good value for what they pay for them. Also, in the final days of the 2016 open enrollment period, many uninsured are largely disengaged from the health care system and opportunities for coverage, with large majorities being unaware of the date for the upcoming deadline to enroll or of the fine for not having health insurance in 2016.

Despite Anecdotal Reports about Narrow Networks, 87% of Working-Age Adults with Insurance Are Satisfied With Their Plan’s Choice of Doctors; 12% Say They Had to Change Doctors in Past Year As the ACA’s Open Enrollment Nears End, Most of Those Who Remain Uninsured Are Disengaged While this month Congress passed…

In this column for The Wall Street Journal’s Think Tank, Drew Altman discusses why the health policy agenda may shift to focus more on affordability of coverage, consumer protection and consumer information in coming years.

Summary and Chartpack: National Survey of Households Affected by Cancer

These charts highlight data from the National Survey of Households Affected by Cancer conducted jointly by USA Today, the Kaiser Family Foundation and the Harvard School of Public Health by telephone between Aug. 1 and Sept. 14, 2006. The survey provides an in-depth look at how families cope…

The most recent Kaiser Health Poll Report found that Americans believe prescription drugs are improving their lives, but most also say that the drug industry cares more about profits than people. The current report analyzes the new data as well as related polling information from earlier surveys by the Kaiser…

A survey of Americans’ attitudes toward managed care, including comparisons between consumers in managed care versus those in traditional fee-for-service plans. The survey was designed and analyzed by researchers at the Kaiser Family Foundation and Harvard University and conducted by telephone by Princeton Survey Research Associates with 1,204 adults nationwide…