A Quarter Say Day-to-Day Life is Still Disrupted. Majorities Rate Government Response to Hurricane Maria Negatively and Say Rebuilding after Maria Not a Priority for the Federal Government

More than half of residents (55%) say rebuilding Puerto Rico is not a priority for the federal government, the new survey finds. Fifty-eight percent rate the federal response as fair or poor, and six in in ten (61%) believe it would have been better if the U.S. territory were a state. Majorities say both the federal government and Puerto Ricans are unprepared to deal with future hurricanes.

Featured in Wednesday’s Washington Post, the representative survey takes stock of how residents of Puerto Rico have fared in the year following the Sept. 20, 2017 storm that led to deaths, damaged homes and infrastructure, curtailed access to food and water and knocked out power for months. The survey explores their experiences after the storm, their ongoing needs and their views of rebuilding priorities. Findings also appear in a separate KFF Report.

In a related analysis, KFF President and CEO Drew Altman compares affected Puerto Rican residents’ views of the response to Hurricane Maria with the views of those affected by Hurricanes Harvey and Katrina.

Among the key findings of the new survey, many residents report that they were without grid power for four months or more (44%); they had employment losses (42%); their home was destroyed or majorly damaged (26%); their vehicle was damaged (21%); they resorted to drinking water from a natural source (21%); and they or a family member have a new or worsened health condition (23%), or have received mental health services as a result of the storm (9%). 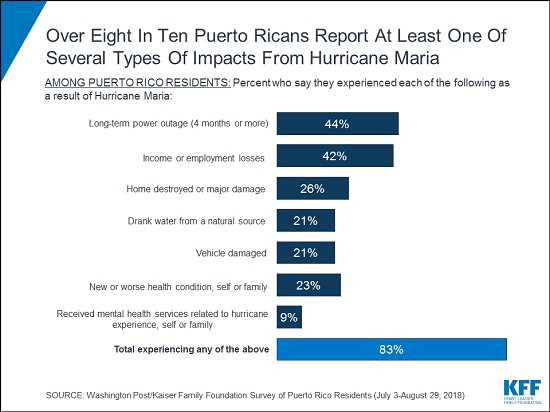 A quarter of residents say their day-to-day life is still somewhat (18%) or very (7%) disrupted. Thirteen percent say their housing conditions are not safe, and six percent say that their home that was damaged during the storm is still unlivable. Three in ten residents (31%) say they personally still need help repairing damage to their home and two in ten (21%) say they need help navigating systems for aid.

Majorities of adults living in Puerto Rico have negative impressions of how all levels of government responded to the storm. The most negative views are of President Trump, with 80 percent rating his response as fair or poor, including 52 percent who say poor. Fifty-eight percent of residents rate the federal response to Maria as fair or poor, and 54 percent say it was worse than the response to Hurricanes Harvey and Irma that struck Texas and Florida around the same time. Roughly seven in 10 residents rate as fair or poor the response of the Puerto Rican government and Governor Rossellό. 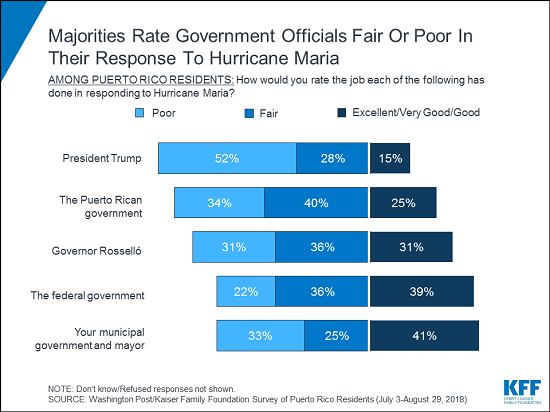 This survey is the 33rd in a series of surveys dating back to 1995 that have been conducted as part of The Washington Post/Kaiser Family Foundation Survey Project. All surveys in the series are designed and analyzed by survey researchers at KFF and The Post. Full survey results are now available. The Washington Post’s journalism drawing on the survey findings is available at Washingtonpost.com.

This survey also is part of the Kaiser Family Foundation’s ongoing efforts to survey and hear directly from those affected by major hurricanes throughout the U.S. It was conducted in person in July and August with adult residents of Puerto Rico who endured Hurricane Maria nearly a year earlier. Visit our special topic page of KFF resources that examine various aspects of recovery efforts in Puerto Rico and the U.S. Virgin Islands.