Residents’ Top Priorities for Rebuilding Focus on Financial Help and Housing; Most Give Local and State Governments Good Marks for Response, But Lower for Federal Officials

Two-thirds (66%) of residents across 24 Texas counties report that they suffered property damage, employment disruptions and/or lost income due to Hurricane Harvey, finds a new Kaiser Family Foundation/Episcopal Health Foundation survey. One in nine residents in these hardest-hit counties remain displaced from their homes three months after the storm.

The survey also finds nearly half (45%) of those who suffered losses across the region say they are not getting the help they need to recover, and four in 10 (42%) say they are not confident that relief funds will reach those most in need.

While Harris County and the entire region suffered major damage, the survey results show that the storm disproportionately affected Black and Hispanic residents, low-income residents and people living in both the “Golden Triangle” area, which includes Beaumont, Orange, and Port Arthur, and in the “Coastal” area including Rockport and Corpus Christi. 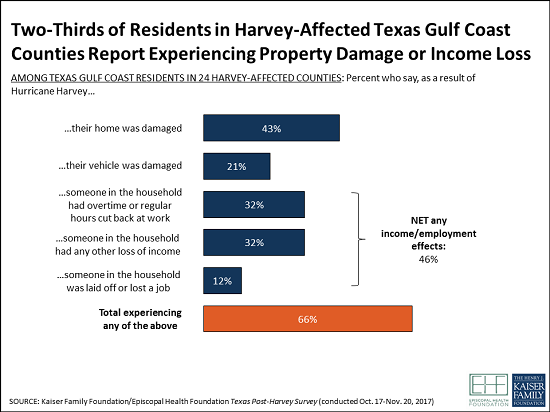 The new KFF/EHF partnership survey probes deeply into the experiences and views of residents in Houston, Harris County and the many other Texas communities hit hardest by the storm and its aftermath. The partners also conducted five focus groups in Houston and Beaumont as part of the project, which aims to provide leaders working on relief efforts with reliable information about Texas residents’ needs and priorities for ongoing recovery.

“The conventional wisdom that Texans hit by Hurricane Harvey have recovered is wrong,” said Drew Altman, president and CEO of the Kaiser Family Foundation. “The people in the hardest-hit areas are telling us that they still face major hurdles before their lives return to normal.”

“We want government and other recovery funds to use this information to make good decisions about how to reach those most in need,” said Elena Marks, president and CEO of the Episcopal Health Foundation. “This survey gives an important voice to hard-hit communities that may have been forgotten, especially those with the greatest needs and fewest resources following the storm.”

Across the Region, Most Residents Report Suffering Property Damage or Lost Income

The survey provides an extensive look at the breadth of the storm damage to residents’ property and incomes. For example:

When asked about priorities for rebuilding and recovery in their area, getting financial help to people who need it tops residents’ lists: nearly two-thirds (64%) say more resources are necessary in this area. A close second is rebuilding destroyed homes (63%), followed by making more affordable permanent housing (58%) and temporary (56%) housing available. These priorities also top the list among those residents who lost property or income due to the storm. 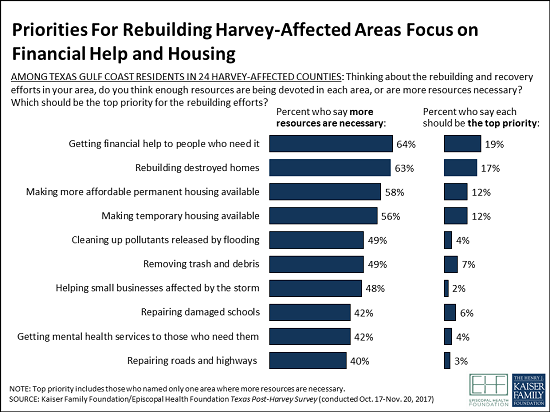 The large share who want more efforts to get financial help to people in need may reflect the community’s mixed success in navigating federal aid programs. Overall about four in 10 (42%) of affected residents say they applied for financial assistance from the Federal Emergency Management Agency (FEMA) or the Small Business Administration (SBA).

Perhaps not surprisingly, affected residents say that help applying for disaster assistance topped their personal needs – with a third (34%) saying they needed more help in this area.  A close second is repairing damaged homes, named by 29 percent of affected residents.

Hurricane Harvey’s financial effects have led to serious hardships for many affected residents.  For example, three in ten (29%) of all affected residents report that they or a household member have fallen behind in their rent or mortgage payments since the storm. The shares are largest among Hispanic (36%) and Black residents (31%) and those with self-reported incomes below the federal poverty level (40%).

These financial difficulties reflect that many affected residents have limited financial resources – with nearly half (48%) saying they have no savings at all, and another quarter (24%) saying they would use up their savings within six months if they lost their job or other sources of income.

The storm and its aftermath also are taking a toll on people’s mental and physical health. Overall, 13 percent of residents say someone in their household has a new or worsening health condition due to the hurricane, rising to 17 percent among those who suffered property or income losses.

Many confronting these emerging health problems are struggling to afford and obtain care. About six in 10 (59%) say they have skipped or postponed needed medical or dental care, cut back on prescriptions or had difficulty getting mental health care since the storm.

In addition, 13 percent of residents overall, including 18 percent of those affected by property or income loss, say their mental health has gotten worse as a result of Harvey.

Some affected residents also say they have had a harder time controlling their temper or felt they had a shorter fuse since Harvey (22%), that they have increased their alcohol use (7%), or that they’ve started a new medication for mental health problems since Harvey (6%).

Residents Rate Local and State Response Positively, But are Mixed on Federal Officials

Most residents give their local, county, and state governments positive marks for the job they are doing responding to Hurricane Harvey. About seven in 10 say each is doing an excellent, very good, or good job.

Designed and analyzed by researchers at the Kaiser Family Foundation and the Episcopal Health Foundation, the Texas Post-Harvey Survey was conducted by landline and cellular telephone October 17 – November 20, 2017 among a random sample of 1,635 adults ages 18 and older living in 24 Texas counties that suffered large amounts of property damage from Hurricane Harvey according to FEMA reports. The region was further divided into four groupings of counties: Harris County (N=714), Counties surrounding Harris (N=310), Golden Triangle (N=305), and Coastal counties (N=306). See report for a full list of counties. The margin of sampling error including the design effect for the full sample is plus or minus 3 percentage points. For results based on other subgroups, the margin of sampling error may be higher.