A new Washington Post/Kaiser Family Foundation survey explores activism in today’s America, providing a detailed look at how the public engages in political and social causes, and the issues that are motivating them.

Among the most extensive studies of political rallygoers and protesters in more than a decade, the survey finds that one in five adults across the country say they have participated in political rallies or protests since the beginning of 2016; about half of that group say they attended an event to support or oppose President Trump or his Administration’s policies.

The Affordable Care Act is one of the most common causes bringing people out of their homes. About three in 10 (28%) rallygoers say they’ve gone to a rally or protest to express their views about the health reform law in the past two years, similar to the share who say the same about the environment and energy issues (32%) and immigration (30%), but behind events to support women’s rights (46%). 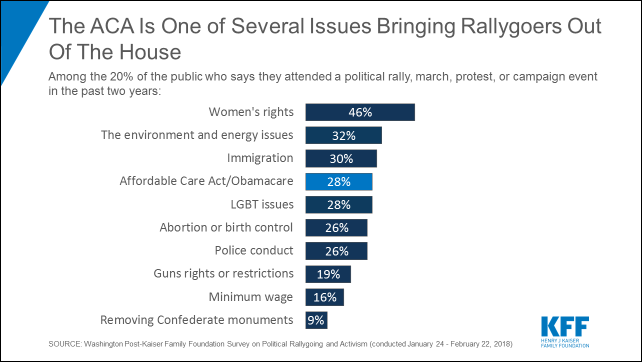 The survey also assesses the overall public’s views about contemporary activism, first amendment rights, and the 2018 midterm elections, as well as their confidence and trust in societal and political institutions.