New KFF/Cook Political Report Partnership Poll in Key States Finds Solid Support for President Trump among his Base but Democrats Have an Edge in Enthusiasm, Especially in Michigan and Wisconsin

Progressive Stances on Fracking, Medicare-for-all and Border Detainments May Turn Off Swing Voters

A year ahead of the 2020 presidential election, President Trump is the biggest defining factor for voters in Michigan, Minnesota, Pennsylvania, and Wisconsin – more often in a negative than a positive direction, finds a new partnership survey from KFF and The Cook Political Report of more than 3,000 voters across the four previously considered “Blue Wall” states, including at least 745 in each state.

More than twice as many voters in these states mention defeating President Trump (21%) as the one thing that will motivate them to vote in 2020 than offer responses related to re-electing him (8%).

Voters across the “Blue Wall” states – the area in the Upper Midwest that were previously considered Democratic strongholds and where 2016 state polls underestimated President Trump’s support – are more likely to mention President Trump as their main motivation than any issue including health care (8%) and the economy (4%), which top voters’ list of key national issues for the 2020 campaign.  Overall, one-fourth (23%) of voters name any issue as their main motivation for voting in 2020. 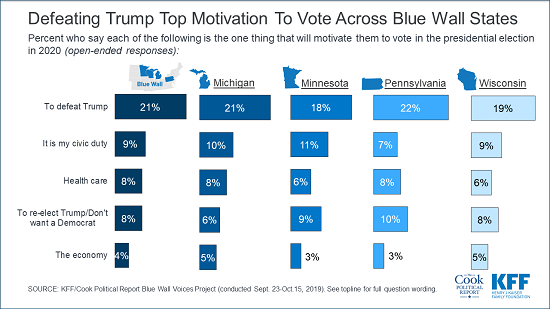 As the 2020 race heats up, health care and the economy are the top issues for voters but these issues may pull voters, especially independents, in opposite directions. President Trump garners a higher approval rating on the economy (49% approve, 50% disapprove) than on any other issue, while he garners his lowest marks on health care (39% approve, 60% disapprove). And while half of independent voters approve of the way President Trump is handling the economy, most (61%) disapprove of the way he is handling health care.

Most voters (59%) in the four states also disapprove of his job performance overall, compared to 41% who approve. Yet, the poll isn’t all bad news for President Trump, as he retains solid support among his base across the Blue Wall states. Large majorities of Republican voters approve of his job performance overall (87%) and on every specific issue tested, including the economy (94%) and health care (84%). 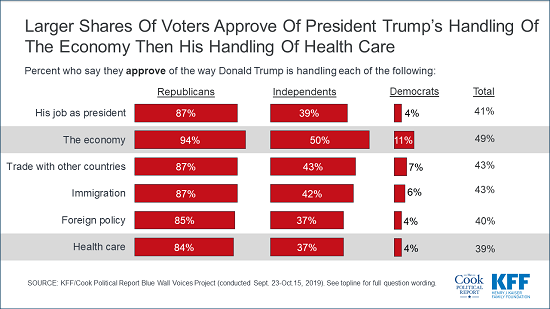 At this stage, nearly two thirds (64%) of Democratic voters across the four states say they are more motivated to vote in 2020 than they were in 2016, compared over half of independents (55%) and Republicans (53%). On a state-by-state basis, Democrats have a clear enthusiasm advantage over Republicans in Michigan, Pennsylvania and Wisconsin, while in Minnesota voters in both parties are about equally enthusiastic.

Republicans’ loyalty to President Trump runs high. Most Republican and Republican-leaning voters (73%) say they want President Trump to be the Republican nominee in 2020, but small shares (28%) of his supporters can imagine a scenario in which he enacts a policy, or fails to enact a policy, that would result in them changing their vote.

A Year Out, President Trump Trails the Democratic Nominee, But 4 in 10 Say Their Mind Isn’t Made Up

While many voters across the Blue Wall states say they have made up their mind about who they will vote for in the 2020 general election, about four in 10 say they either are undecided (23%) or are probably going to vote for either President Trump or the Democratic nominee but haven’t completely made up their minds yet. This crucial group of “swing voters” make up both those voters who may choose to stay home next year and a small share of voters who may still be persuadable to vote for the other party’s candidate (5%). 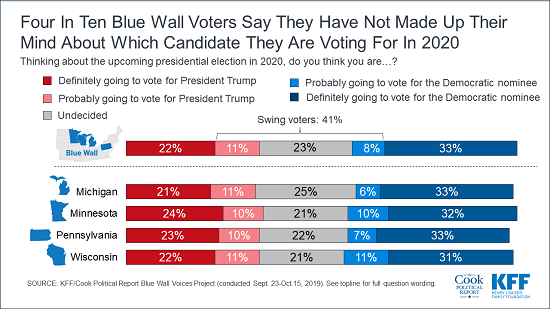 While Democrats Support Progressive Platforms, Some May Turn Off Crucial Swing Voters

Voters who say they are going to vote for the Democratic nominee in 2020  overwhelmingly think the progressive policy positions included in this survey are good ideas, including the Green New Deal (92%), a pathway to citizenship for immigrants in the country illegally (91%), a ban of future assault weapon sales (88%) and a ban and mandatory buyback of assault weapons (83%). Fewer, but still a majority, also say a ban on fracking (54%), stopping U.S. border detainments (56%), and a national Medicare-for-all plan (62%) – a hot-button issue in the Democratic primary race – are good ideas.

While few self-reported 2020 Democratic voters say they wouldn’t vote for a candidate who disagreed with them on any of these issue in the general election, there is some evidence that some of these progressive stances are not popular among swing voters.

The Blue Wall poll also explores voters’ views on other issues, including tariffs and trade. Most voters across the four states say recent tariffs imposed on goods from China and other countries are hurting the national economy (55%) and workers in their state (55%). In addition, voters are about three times more likely to say the tariffs are hurting their families (46%) than are helping their families (14%). These shares are similar in each of the four states.

Voter Preferences in the Democratic Primaries

Designed and analyzed by public opinion researchers at KFF in collaboration with Cook Political Report, the poll was conducted September 23rd – October 15th, 2019, among a representative random sample of 3,222 registered voters in four states (767 in Michigan, 958 in Minnesota, 752 in Pennsylvania, and 745 in Wisconsin) constituting the Democratic “Blue Wall.” The poll relies on an innovative probability-based methodology designed to address shortcomings with telephone-only surveys based on either voter-registration rolls or random-digit dialing. Voters were contacted via mailing address using registration-based sampling and encouraged to participate in the survey either online or by telephone and follow-up contacts were made using outbound telephone calls. Interviews were conducted in English and Spanish either online (2763), by calling in to complete (255), or throughout outbound telephone interviews (204).  The margin of sampling error is plus or minus 2 percentage points for the full sample. For results based on subgroups, the margin of sampling error may be higher.