More than one third of the nation’s 15,500 nursing homes, accounting for 39 percent of all nursing home residents, received relatively low ratings of 1 or 2 stars under the federal government’s recently revamped Five-star Quality Rating System, according to a new analysis by the Kaiser Family Foundation.

The rating system, overseen by the Centers for Medicare and Medicaid Services, assigns ratings of 1 to 5 stars to all Medicare- and Medicaid-certified nursing homes based on deficiencies that may be reported during health inspections, and measures relating to staffing and quality. The ratings, part of CMS’s Nursing Home Compare tool, aim to give consumers better information to compare and choose among nursing homes in their area, which is especially important given concerns about reported problems arising from inadequate staffing, fire safety hazards and substandard care — serious issues in light of the vulnerability of the nursing home population. 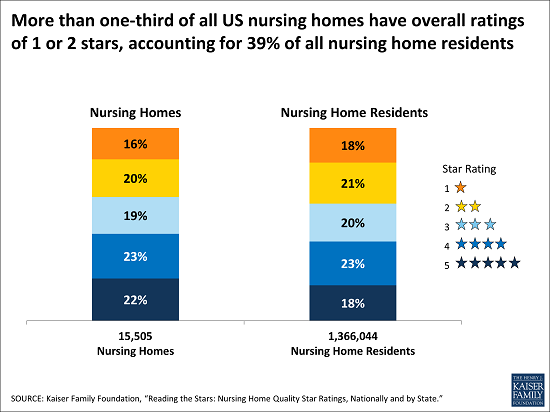 At the county level, two-thirds of all counties in the U.S. have at least one nursing home with a 4- or 5- star rating, while the remaining one-third of counties have only nursing homes rated with fewer stars (27%) or no Medicare or Medicaid-certified nursing homes at all (7%). The presence of a highly-rated home in a county doesn’t necessarily imply that area patients will live in one, since bed availability is a factor and people may place a high priority on being close to family.

For the full analysis, Reading the Stars: Nursing Home Quality Star Ratings, Nationally and by State, as well as more resources on Medicare, visit kff.org.