Millions of current enrollees in stand-alone Medicare Part D prescription drug plans will face premium and other cost increases next year unless they switch to lower-cost plans during the open enrollment period that began Oct. 15 and ends on Dec. 7, a new KFF analysis finds.

For instance, the 1.9 million enrollees without low-income subsidies in the Humana Walmart Rx plan—the third most popular stand-alone plan in 2019—will see their monthly premium more than double, on average, if they do not switch plans for 2020. That is because Humana is consolidating this plan and the Humana Enhanced plan into a new offering named Humana Premier Rx. Current Humana Walmart Rx enrollees will be automatically enrolled in the new plan, and, unless they switch, will see their monthly premium rise from $28 to $57.

While premiums for some other national plans are decreasing, enrollees in those plans may face other cost increases. For example, the 2.1 million enrollees without low-income subsidies in the nation’s largest stand-alone Part D plan, CVS Health’s SilverScript Choice, will see a modest $2 decrease in their average monthly premium, from $31 in 2019 to $29 in 2020. But the annual deductible in this plan will increase from $0 in most areas in 2019 to $215 to $435 in 2020—an increase that will more than offset the modest $2 monthly premium reduction.

Overall, the analysis finds that premiums will vary widely across plans in 2020, as in previous years. Among the 20 stand-alone Part D plans available nationwide, average premiums will range sixfold, with the two lowest-premium plans charging $13 per month (Humana Walmart Value Rx) and $14 per month (WellCare Wellness Rx) and the two highest-premium plans charging $79 per month (AARP MedicareRx Preferred) and $83 per month (Express Scripts Medicare Choice). The estimated national average monthly PDP premium for 2020 is projected to increase by 7% to $42, based on current enrollment patterns. The actual national average premium in 2020 may be lower if current enrollees switch to, and new enrollees choose, lower-premium plans during open enrollment. 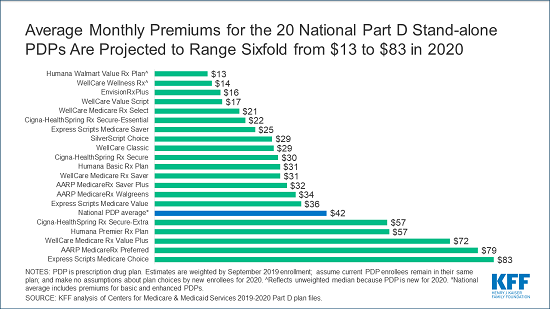 Among other key findings in Medicare Part D: A First Look at Prescription Drug Plans in 2020:

Forty-five million beneficiaries have prescription drug coverage through Medicare, including 20.6 million who are in stand-alone Part D plans as a supplement to traditional Medicare. The analysis provides an overview of stand-alone plans that will be available in 2020 and highlights key changes from prior years.

Also available are KFF’s newly updated basic resource, An Overview of the Medicare Part D Prescription Drug Benefit, and the recently released How Will The Medicare Part D Benefit Change Under Current Law and Leading Proposals?, which shows that some Part D enrollees can expect to see their out-of-pocket drug expenses rise in 2020.