Medicare Part D enrollees with relatively high out-of-pocket expenses can expect see their costs rise in 2020, according to a new KFF analysis. This is mainly due to an increase in how much enrollees will pay out of pocket for their prescription drugs in the Part D benefit coverage gap phase before they qualify for catastrophic coverage.

The analysis finds that out-of-pocket drug costs will increase by nearly $400 — from $2,275 in 2019 to $2,652 in 2020 — for Part D enrollees who take only brand-name drugs and have annual total drug costs that reach the catastrophic coverage threshold. 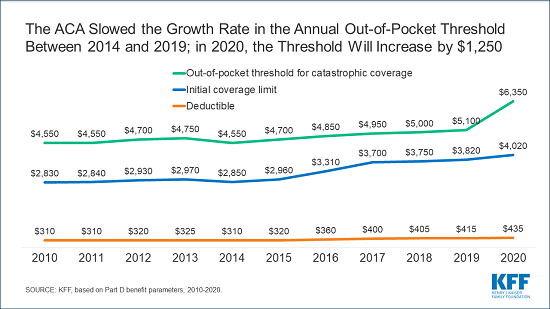 For enrollees who take only brand-name drugs, about a quarter of this increase will be paid out-of-pocket, with the remainder covered by drug manufacturers in the form of a price discount for brands in the coverage gap phase. Those who take only generics will pay the entire increase out-of-pocket. The relatively large increase in 2020 is due to the expiration of the Affordable Care Act (ACA) provision that slowed the growth rate in the catastrophic threshold between 2014 and 2019.

In 2017, the most recent year for which claims data is available, 4.9 million enrollees who were not eligible for low-income subsidies reached the Part D coverage gap, including 1 million who reached the catastrophic threshold. Had the threshold been higher in 2017, fewer than 1 million enrollees would have qualified for catastrophic coverage that year, meaning a larger number of enrollees would have remained in the coverage gap in 2017, where they pay a larger share of their total costs than in the catastrophic phase.

The analysis of higher out-of-pocket costs that Part D enrollees will face in 2020 comes at a time when lawmakers in Congress are considering proposals to address concerns about prescription drug costs. Proposals from the Senate Finance Committee, Speaker Pelosi, and the Trump Administration each include changes to the standard Medicare Part D benefit, including a hard cap on out-of-pocket costs for Part D enrollees and a reallocation of liability above the catastrophic threshold.