The average person with traditional Medicare coverage paid $5,460 out of their own pocket for health care in 2016, according to a new KFF analysis and interactive tool.

According to the analysis – based on the most current public data — beneficiaries who were likely to spend more out of pocket include women, people in older age groups, those who had been hospitalized, people in poorer self-reported health, and those with multiple chronic conditions.

The analysis comes at a time when some policymakers and presidential candidates are discussing proposals to expand coverage through programs modeled in some respects on Medicare, and improve financial protections and lower out-of-pocket costs for people currently covered by Medicare. Current Medicare-for-all proposals would largely eliminate premiums and out-of-pocket costs, including for those now covered by Medicare. 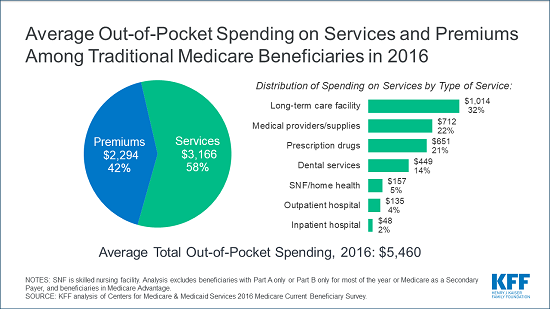 The analysis includes three interactive graphics that allow users to explore out-of-pocket spending data for different subgroups of Medicare beneficiaries, such as age, gender, and income, to see:

The analysis is based on the most current year of out-of-pocket spending data available from the Medicare Current Beneficiary Survey, a nationally representative survey of Medicare beneficiaries. It does not include spending by beneficiaries in Medicare Advantage plans, due to a lack of publicly available data for beneficiaries enrolled in the private Medicare plans.