A major structural change to Medicaid financing such as the per capita cap system called for under the American Health Care Act could have significant implications for the 11 million seniors and people with disabilities who are covered by both Medicare and Medicaid, according to a new brief by the Kaiser Family Foundation.

One in five Medicare beneficiaries relies on Medicaid for premium and cost-sharing assistance and to pay for services not covered by Medicare, such as nursing home care. Most are 65 or older, are disproportionately women and older than 85, but four in ten are under age 65 and have permanent disabilities. Medicaid also plays an important role in paying for long-term services and supports, helping to cover the costs for 2 out of 3 Medicare beneficiaries in nursing homes. 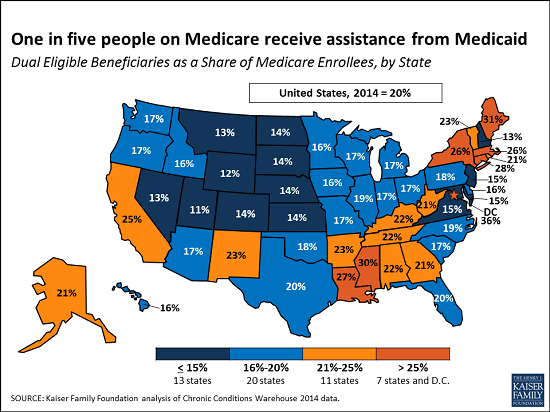 Under a Medicaid per capita cap system, the federal government would pay states a fixed amount of money per Medicaid enrollee annually, with the amount varying by category of beneficiary, including the elderly, disabled, children and adults who gained coverage under the Affordable Care Act’s Medicaid expansion, and other adults.  Payments to states would increase with medical inflation (CPI-M), rather than the current financing system, in which the federal government covers a percentage of all health care expenses incurred by enrollees.

The new brief, in FAQ format, examines the possible implications of such a system for the low-income seniors and people with disabilities on Medicare. They include the potential that states, facing fiscal pressure, could consider scaling back or eliminating optional services, such as dental care, vision care, and home and community-based services (HCBS); reduce provider payment rates; and restrict Medicaid eligibility for populations that they are not required to cover. The brief also looks at how the impact of a per capita cap or block grant could vary across states. It includes state-level data on the number of Medicare beneficiaries with Medicaid and other facts and figures.