Nursing facilities are one part of the long-term care delivery system that also includes home and community based services, but their relatively high cost has led them to be the focus of much attention from policymakers. Medicaid plays a major role in financing nursing facility care in the United States, and policy proposals to limit federal financing for Medicaid may lead to cuts in eligibility or scope of coverage for long-term care services. In addition, regulations effective November 2016 aimed to address longstanding challenges in quality and safety in nursing facilities. As the demand for long term care continues to increase and policy proposals and regulations unfold, the characteristics, capacity, and care quality of facilities remain subjects of concern among consumers and policy makers.

This report provides information on recent trends in nursing facilities in the United States, drawing on data from the federal On-line Survey, Certification, and Reporting system (OSCAR) and Certification and Survey Provider Enhanced Reports (CASPER), to provide information on nursing facility characteristics, resident characteristics, facility staffing, and deficiencies by state from 2009 through 2016. Additional detail on the survey and methods underlying the data in this report are provided in the Appendix at the end of the report. This information enables policymakers and the public to monitor and understand recent changes in nursing facility care in the United States and helps highlight areas of ongoing interest for policymaking.

#Medicaid is the primary payer source for most certified nursing facility residents, with more than six in ten (62%) residents—about 832,000 people—having Medicaid as their primary payer in 2016.

Over the 2009 to 2016 period, share of nursing facilities that were for-profit increased slightly, from 67% in 2009 to 69% in 2016, while the share that were non-profit declined slightly from 26% in 2009 to 24% in 2016 (the remainder, about 7% over time, were government-owned). Ownership patterns vary widely across states, with states in the South and West having higher shares of facilities that are for-profit. In addition, more than half of facilities over this period were owned or leased by multi-facility organizations (chains that have two or more facilities), though the share of nursing facilities that are chain-owned varies by state. 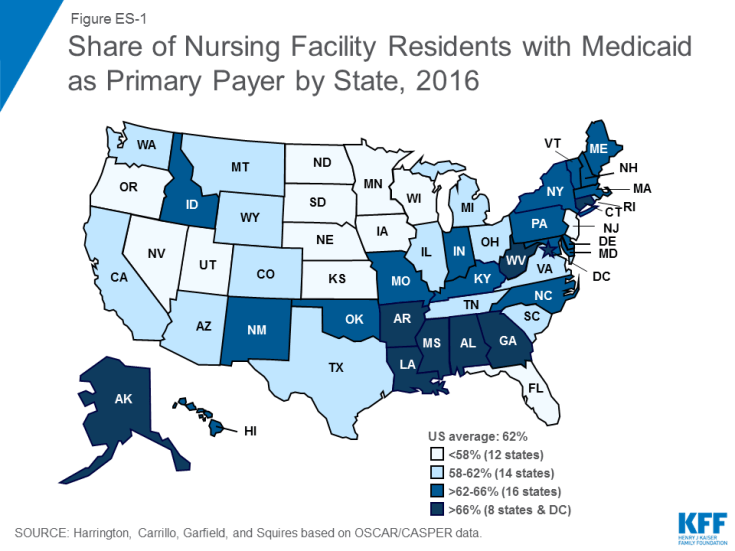 Resident characteristics affect the environment of the facility and also require different levels and types of staff resources. While nearly all residents in a nursing facility require some level of assistance, some facilities may have residents with a greater level of need. On average, in 2016, residents’ level of need for assistance with activities of daily living scored 5.8 on a scale from 3 to 9, and levels of need have been fairly stable since 2009. Residents commonly have mobility impairments, which range from difficulty walking to inability to get oneself out of bed. While relatively few (4%) residents were bed-bound in 2016, over six in ten (65%) of residents depend on a wheelchair for mobility or are unable to walk without extensive or constant support from others. Another common health care need of nursing facility residents is treatments related to bladder or bowel incontinence. However, there is still a notable discrepancy between the high percentage of residents with incontinence problems and the low percentage of residents in training programs to address these problems.

Cognitive and behavioral health is of particular concern for nursing facility residents. Nearly half (45%) of residents had a dementia diagnosis in 2016, and 32% had other psychiatric conditions such as schizophrenia, mood disorders, or other diagnoses. In addition, nearly two-thirds (63%) of residents received psychoactive medications, including anti-depressants, anti-anxiety drugs, sedatives and hypnotics, and anti-psychotics, in 2016. Over-use of anti-psychotic medications has been the focus of recent policy attention, particularly their use among residents with dementia, and is the subject of regulations for nursing facility care. Use of physical restraints is another area of concern for residents with cognitive problems. Federal law and ongoing education about the negative effects of restraints have led to a decline in their use over time, and the share of residents with physical restraints was under one percent in 2016.

Over the past 25 years, numerous research studies have documented a significant relationship between higher nurse staffing levels, particularly RN staffing, and the better outcomes of care. Though several recommendations for minimum staffing levels have been put forth, there are not federal requirements for specific nurse staffing levels (though some states do have their own minimum staffing requirements). In 2016, total nursing hours (including RNs, LPN/LVNs, and NAs) averaged 4.1 hours per resident day, an increase from 3.9 in 2009, but there was wide state variation in average nursing hours per resident day. Nationwide, many of these hours are accounted for by non-licensed nursing care (i.e., nursing assistants).

Nursing facilities provide care to prevent problems and to address the needs of residents, but sometimes care does not meet established standards. State surveyors assess both the process and the outcomes of nursing facility care for 175 individual requirements across eight major areas. Where a facility fails to meet a requirement, a deficiency or citation is given to the facility for that individual requirement. Between 2009 and 2013, the average number of deficiencies per facility declined from 9.33 to 7.28, though there was a slight increase between 2013 and 2016, with 8.76 deficiencies on average in 2016. The share of facilities with no deficiencies increased slightly from 2011 (6.88%) to 2013 (8.07%) then dropped to 6.5% in 2016. In 2016, the most common deficiencies were given for failures in infection control, accident environment, food sanitation, quality of care, and pharmacy consultation. Of particular concern are deficiencies that cause harm or immediate jeopardy to residents. In 2016, more than one in five facilities received a deficiency for actual harm or jeopardy. As with other outcomes, there was wide variation across states in these outcomes; however, some states had high rates across all top ten deficiencies.

Recent trends in facility characteristics can help policymakers spot potential areas of concern and plan for future system needs. For example, while nursing facility capacity has remained fairly flat from 2009 to 2016, occupancy rates have declined, perhaps reflecting a shift from institutional to community-based long-term care. Still, overall demand for long-term care services may increase in coming years as the “baby boom” generation ages, and states and policy makers can use this information to determine sufficient capacity to accommodate long-term care user choice in both institutional and community-based settings. In addition, continuing a trend that started before 2009, the share of nursing facilities that are for-profit or chain-owned continued to grow slightly from 2009 to 2016. These facility characteristics are important to policymakers and consumers because of their link to poorer quality of care, and continued monitoring of facility ownership by states can help to ensure that a high quality of care is provided at these facilities. With Medicaid as the primary payer for most nursing facility residents, policy and payment for nursing facility care is a priority policy area for state and federal governments that finance it. Changes to federal Medicaid financing could have repercussions for states’ ability to maintain Medicaid spending for long-term services and supports.

Notable shares of nursing facility residents have extensive behavioral or physical health needs, and facilities’ ability to meet these needs is the subject of ongoing policy attention. Nursing assistants who provide most of the care to these individuals often have limited training in working with this population. Some may interpret residents’ behavior as aggressive or have difficulty managing these residents’ needs.  Despite regulations to limit the use of psychoactive medication, relatively high shares of residents still receive these medications, indicating an ongoing problem with chemical restraints. This pattern may be indicative of nursing facilities lacking systematic plans to address the needs of residents with dementia or other cognitive impairments. Regulations could implement ACA requirements to improve the quality of care for residents with cognitive impairments and further restrict the use of psychotropic agents.

Last, the data show that nursing facility deficiencies have declined between 2009 and 2016, though there is still much state variation in rates of deficiencies. While voluntary guidelines for compliance programs have been in place for many years, the ACA authorized new, mandatory compliance programs to improve quality of care. Regulations effective November 2016 implement these requirements, building on existing requirements for quality assessment and assurance programs to address quality deficiencies. Moving forward, it will be important to continue to monitor deficiency reports to understand whether and how new requirements are affecting care and outcomes and to identify additional areas of concern for future policy changes.