Among Medicare Changes, Strongest and Broadest Support Is for Negotiating Drug Prices

People With Medicare, Medicaid and Employer Plans Give Their Coverage Similar Ratings, But Some Report Affordability and Physician Access Problems

Fifty years after President Lyndon Johnson signed the law creating the Medicare and Medicaid programs, a new Kaiser Family Foundation poll finds a majority of the public and the vast majority of program beneficiaries view the two programs positively. Likely as a result, the public starts with a preference for the status quo over major structural changes that would reshape how the programs serve beneficiaries.

A strong majority (70%) say that Medicare should continue to ensure all seniors get the same defined set of benefits. Far fewer (26%) say that the program should be changed to instead guarantee each senior a fixed contribution to the cost of their health insurance – a system known as premium support that has been proposed to address Medicare’s long-term financing challenges.

By at least two-to-one margins, majorities of Democrats, Republicans and independents favor keeping Medicare as is rather than changing to a premium support program. Adults under 65 years old are somewhat more likely than seniors to favor premium support (28% compared to 18%), though large majorities in all age groups prefer Medicare’s current structure.

Despite the public’s lack of support for this change, a majority (54%) worry that Medicare will not be able to provide the same level of benefits to future enrollees, and two thirds (68%) say that changes are needed to keep Medicare sustainable for the future.

The poll finds that the public opposes changes to Medicaid that would turn the program into a block grant to states by nearly a two-to-one margin (62% opposed, 32% in favor). Some Republicans in Congress have supported Medicaid block grants in the past, and the poll finds a big partisan divide on the question: Half of Republicans support block grants, while only one in five Democrats do.

By far the most popular change to Medicare is allowing the federal government to negotiate with drug companies. Overall, 87% of the public supports such an option, including majorities of Democrats, Republicans and independents and across generations. 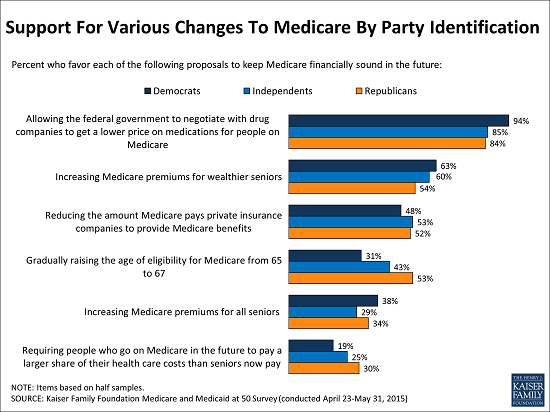 Attitudes toward Medicare and Medicaid programs

The survey shows Medicaid now has a broad reach, as nearly two thirds (64%) of the public report a personal connection to the program either because they are or have been covered or have close friends or family members who are or have been covered. Medicaid’s image does not appear to be a major barrier to enrollment, with a large majority (85%) of those not enrolled saying they would sign up if they needed it.

The survey also explores the experiences of those currently covered by Medicare and Medicaid. Very large majorities of those covered report positive experiences with Medicare (91%) and with Medicaid (86%), shares similar to what people with employer coverage say (87% positive).

Similar majorities also say they feel well-protected financially by their coverage, though minorities report some financial hardships, which may reflect beneficiaries’ relatively low incomes. About one in five Medicaid enrollees (19%) and one in seven Medicare beneficiaries (14%) say that in the past 12 months they or a family member have had to spend less money on food, heat or other basic needs to pay for health care. In comparison, about one in four of those without insurance (27%) and one in 10 of those with employer coverage (11%) report such hardships.

The survey finds some adult beneficiaries report delaying or going without various types of health care in the past 12 months due to cost, often for services such as dental or vision care that aren’t covered by the programs. For instance, relatively small numbers say they delayed or skipped going to the doctor (13% for Medicaid enrollees; 9% for Medicare), but larger shares say they did so for dental care (31% for Medicaid enrollees, 23% for Medicare). Each program’s beneficiaries are far less likely than the uninsured to report these problems. 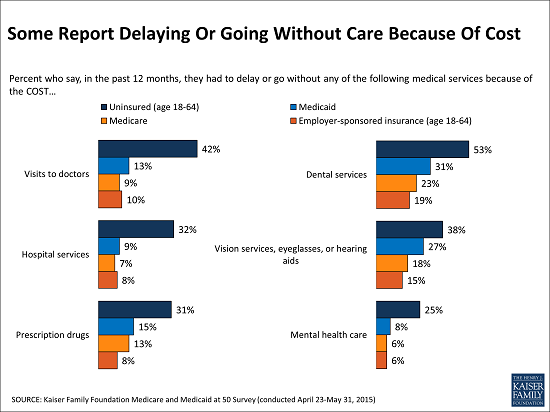 The survey also finds that the low-income adults covered by Medicaid are somewhat more likely than those with other types of insurance to report access issues in the past 12 months. For instance, 23 percent of Medicaid beneficiaries say they had trouble finding a provider willing to accept their insurance. Fewer with Medicare (9%) or employer coverage (9%) report this problem. Similarly, a larger share of people with Medicaid (15%) than Medicare (6%) or employer coverage (5%) say they had a problem getting a referral or appointment to see a specialist in the past year.

Visit our Medicare and Medicaid at 50 resource page for more relevant research, articles and videos.

The poll was designed and analyzed by public opinion researchers at the Kaiser Family Foundation and was conducted from April 23-May 31, 2015 among a nationally representative random digit dial telephone sample of 1,849 adults, including oversamples of people ages 55-64 (n=395), people 65 or older (n=512) and people who report currently having Medicaid coverage (n=391). Interviews were conducted in English and Spanish by landline (748) and cell phone (1,101). The margin of sampling error is plus or minus 3 percentage points for the full sample. For results based on other subgroups, the margin of sampling error may be higher.