Two Medicaid-Related Initiatives That Help Promote Long-Term Care at Home and in the Community, Rather Than in Institutions, Are Set To Expire at the End of December

All States and Washington D.C. Currently Utilize One or Both Initiatives

Two initiatives that for years have helped shift Medicaid enrollees away from nursing homes in favor of long-term care at home and in the community face year-end deadlines that could undercut that trend, according to two new KFF issue briefs. While there does not appear to be substantive disagreement over the initiatives like there is with many other federal health programs, their expiration is coming at a time when Congress is engaged in a contentious budget debate with other competing demands.

Funding for Medicaid’s Money Follows the Person (MFP) demonstration, which has served more than 90,000 people in 44 states since 2007, is set to expire on December 31. The program provides states with enhanced federal matching funds for services and supports needed to help seniors and people with disabilities transition from institutional care to community-based care.

Absent a reauthorization by Congress, KFF surveys show that nine of the 44 states will have exhausted their current funds by the end of this year, and the vast majority of the remaining states expect to run out of money for the program during 2020. Fifteen states report a range of services, activities and staff positions that they expect to discontinue, including services such as community case management, housing relocation assistance and family caregiver training.

The second brief examines the implications of a pending change to “spousal impoverishment” rules in Medicaid that allow married couples to protect a portion of their income and assets should one spouse seek Medicaid coverage for long-term care, so that the other spouse still has adequate resources to meet their needs. A provision of the Affordable Care Act that requires state Medicaid programs to apply such rules to home and community-based long-term care is set to expire at the end of December.

That could tip the balance of financial incentives toward institutional care, to which the rules would still apply, and affect the efforts that states have made through waivers to expand access to home and community-based services (HCBS), the brief explains. Following a decades-long shift, the majority of Medicaid long-term services and supports spending now goes toward HCBS instead of institutional care. Medicaid spent $167 billion on long-term services and supports in 2016, with 57 percent on HCBS. 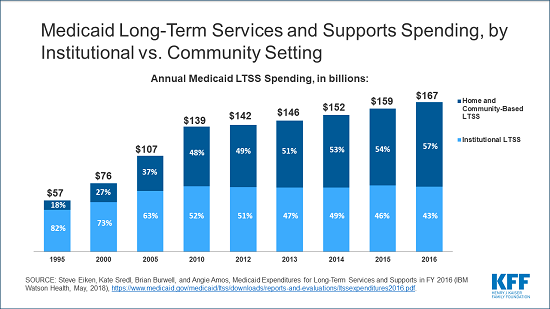 If Congress does not extend the ACA provision, states would still have the option to continue applying the spousal impoverishment rule to at least some enrollees in HCBS. However, a KFF survey finds that at least 14 states expect the expiration of the ACA provision to have an effect on Medicaid enrollees who are receiving such services.