The COVID-19 pandemic brought new focus to the long-standing unmet need for home and community-based services (HCBS) among seniors and people with disabilities and direct care workforce shortages. Recognizing Medicaid’s role as the primary payer for HCBS, the American Rescue Plan Act (ARPA) temporarily increased federal funding to support Medicaid HCBS. The Build Back Better Act (BBBA), as passed by the House in November 2021, would provide $150 billion in new federal funds for Medicaid HCBS, including a permanent increase in the federal matching rate. The prospects for the BBBA remain uncertain in the Senate. This issue brief presents findings on key state policy choices about Medicaid HCBS in FY 2020. This is the latest data available, and the first since the onset of the COVID-19 pandemic. The data were collected in KFF’s 19th survey of state officials administering Medicaid HCBS programs in all 50 states and DC. A related brief presents the latest state-level data about the number of people receiving HCBS and HCBS spending. Key findings include the following (Figure A): 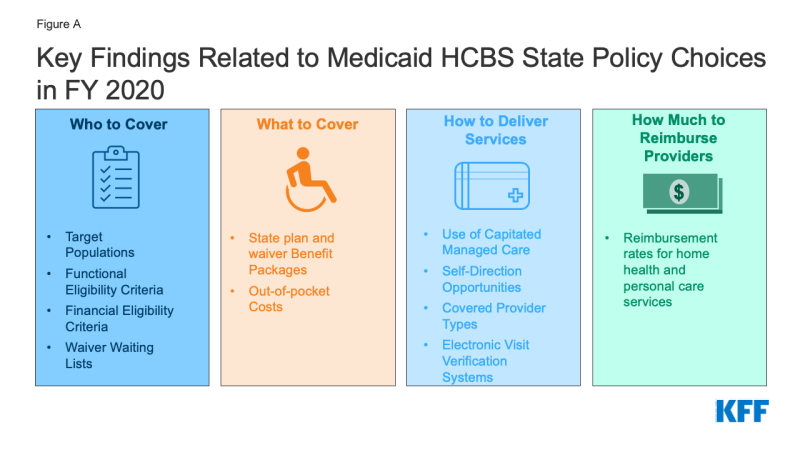 Looking ahead, states’ ability to make longer-term systemic changes and investments to expand access to HCBS is likely to be affected by whether the permanent increase in federal Medicaid matching funds for HCBS, as contained in the BBBA Act as passed by the House, ultimately becomes law. BBBA not only provides additional funding, without an expiration date, but also encourages states to assess their HCBS programs more holistically, moving away from a siloed focus on specific populations. This year’s HCBS state policy survey not only provides a snapshot of policies in place during the pandemic but also can serve as a baseline from which to measure changes in state policies in light of new federal funds available through the APRA and (if passed) the BBBA and in response to the increased focus on HCBS instead of institutional care due to the pandemic.

It will be important to understand how states use new federal funds to expand who is eligible for HCBS and which services are provided, as well as how the new funds may affect states’ and providers’ capacity to deliver services, and the extent to which new funds bolster the direct care workforce through increased payments. If passed, BBBA would make a significant investment in HCBS, which could help states address long-standing needs that were highlighted by the pandemic. States that choose to accept the new BBBA funds would have to identify HCBS access barriers and unmet needs to address with the new funds. To the extent that barriers may differ among states, states’ responses to address those barriers also may differ. Additionally, states are starting in different places in terms of the breadth of their existing HCBS programs. However, BBBA also could incentivize states to move toward some national uniformity. For example, states that accept BBBA funds would have to cover personal care state plan services, provide family caregiver supports, and adopt or expand Medicaid eligibility for working people with disabilities. These initiatives could reduce existing variation in HCBS eligibility and benefits across states.