Indiana initially implemented the ACA’s Medicaid expansion through a Section 1115 waiver in February 2015.  Indiana’s waiver included important changes from federal law regarding enrollment and premiums.  The initial waiver expired, and Indiana received approval for a waiver extension in February, 2018 which continues most components of HIP 2.0 and adds some new provisions related to enrollment and premiums.  This brief looks at available data from the state’s evaluation of premiums prepared by The Lewin Group (as well as other reporting to CMS) to highlight what is known about the impact of these policies to date.  We review these data to identify potential implications for changes in the recent Indiana renewal and for other states considering similar provisions.  Key findings include the following:

The data and findings have implications for the new provisions included in the Indiana renewal that include a tobacco premium surcharge, a lock-out for failure to timely renew and a work requirement .  These changes could make premiums unaffordable for more individuals and result in potentially eligible people losing coverage.  Recent quarterly reporting suggests that 28% of disenrollments were due to failure to complete or comply with redeterminations, so many could be subject to a coverage lock-out.  These data as well as data about confusion in making premium payments could signal that administrative, paperwork or process barriers could affect individuals subject to new work requirements.  Eligible individuals may experience problems in documenting their work status or navigating an exemption resulting in eligible individuals losing coverage.  Understanding the implications of existing waiver policies in Indiana and tracking implications of the renewal policies could also help inform other states considering similar policies.

Like other states that have expanded Medicaid, Indiana experienced a reduction in the number of uninsured residents and a large gain in Medicaid enrollment.  Between 2013 and 2016, the nonelderly uninsured rate fell by 7.0 percentage points in Indiana, larger than both the national average decrease of 5.2 percentage points and the 5.5 percentage point decrease in all Medicaid expansion states. As of December 2017, there were nearly 397,000 beneficiaries enrolled in HIP 2.0.3 Overall, 83% of enrollees had incomes at or below 100% FPL (44% with incomes below 5% FPL).4

The initial waiver expired, and Indiana received approval for a waiver extension in February, 2018 which continues most components of HIP 2.0 and adds some new provisions.  A detailed summary of the provisions included in the recent approval can be found here, but key changes to HIP 2.0 related to enrollment and premiums approved on February 1, 2018 include:

This brief looks at available data from the state’s evaluation of premiums (as well as other reporting to CMS) to highlight what is known about the impact of these policies to date.  In addition, we review these data to help inform potential implications related to changes in the recent Indiana renewal and for other states considering similar provisions.

Overall, more than half (55%) of all of those eligible to pay premiums under Indiana’s waiver during the first two years of implementation failed to do so, resulting in negative consequences.  Data from the state evaluation show that 55% of the 590,315 individuals eligible to pay a premium between February, 2015 and November, 2016, did not do so.  The consequences for failing to make a payment differ by income.5  The rate of non-payment was higher among individuals with incomes at or below 100% FPL with 57% failing to make a premium payment compared to 51% of those with incomes above 100% FPL that did not make a payment.  In addition, recent monthly data show that as of December, 2017 over 20,000 people were “conditionally eligible” meaning they had been found eligible for Medicaid in Indiana, but were not yet enrolled due to failure to pay premiums.  Over half (54%) of those conditionally eligible had no or very low incomes, below 5% FPL (less than $607 per year for an individual in 2018); another 26% had income between 6-100% FPL, and 20% had income above 100% FPL.6

Among those with incomes below 100% poverty, 57% or nearly 287,000 people were moved from the more comprehensive to the more limited benefit package for failing to pay a HIP 2.0 premium during the first two years of Indiana’s waiver. 7  People with incomes at or below the federal poverty level do not have to pay premiums to get or maintain coverage under Indiana’s waiver.  If people at this income level choose to pay premiums, they receive HIP Plus benefits, which include vision, dental, and expanded prescription drug coverage; if they do not pay premiums, they receive HIP Basic benefits, without the additional Plus covered services and with point-of-service copayments. 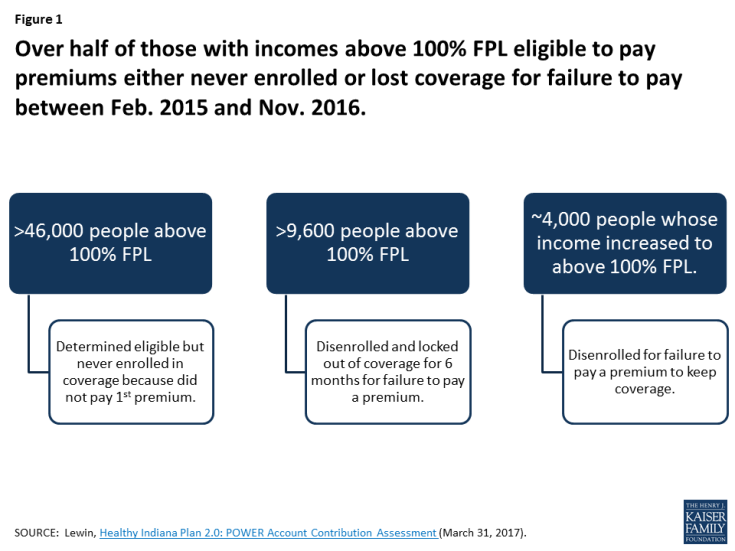 Figure 1: Over half of those with incomes above 100% FPL eligible to pay premiums either never enrolled or lost coverage for failure to pay between Feb. 2015 and Nov. 2016. 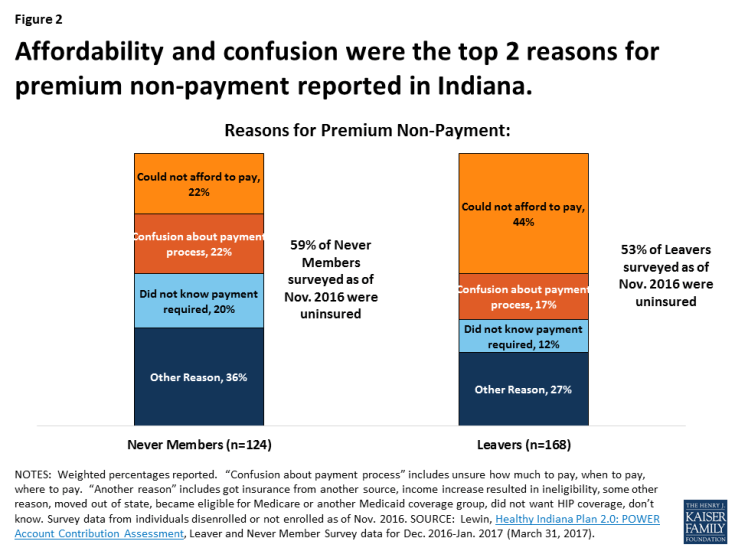 Figure 2: Affordability and confusion were the top 2 reasons for premium non-payment reported in Indiana.

Implications for the HIP 2.0 Renewal

CMS recently renewed Indiana’s HIP 2.0 waiver for another three years, from February, 2018 through December, 2020.  The waiver renewal continues many of the policies already implemented, such as the delay of coverage until the first premium is paid and disenrollment and a 6-month coverage lock-out for those over the poverty level who miss a premium payment.  As a result, data about the number of people who are eligible for coverage but never enroll or lose coverage due to failure to pay a premium will be important to continue to monitor to determine the waiver’s impact on coverage and implications for the number of uninsured.  In addition, the waiver renewal includes some new policies, approved for the first time, which also could affect eligible people’s ability to obtain or maintain coverage, as described below.

The new waiver authority to increase premiums through a tobacco surcharge could make premiums unaffordable for more individuals.  Under the waiver renewal, Indiana will charge even higher premiums for some enrollees by implementing a 50% surcharge on tobacco users beginning in their second year of enrollment.12 This surcharge increases premiums above 2% of income.  For example, people with income from 76-100% FPL ($769-$1,012/month for a household of 1 in 2018) will face standard premiums of $15 per month under Indiana’s waiver renewal.  The tobacco surcharge increases premiums to $22.50 per month at this income level, which exceeds 2% of income.  This surcharge could apply to nearly half of demonstration enrollees.13  Existing data show that affordability and confusion about payment are key factors for individuals not paying premiums.

The waiver renewal allows Indiana to impose a 3 month coverage lock out on expansion adults who fail to timely renew coverage, which could result in eligible people losing coverage.  If this policy were in effect from August through October, 2017, the most recent quarter with available disenrollment data, nearly one in three (28%) of those disenrolled or nearly 13,000 people would have lost coverage and not been allowed to re-apply for three months, even if eligible (Figure 3).  While some people may lose coverage at renewal because they no longer meet eligibility criteria, many remain eligible but may have experienced a problem with misdirected paperwork, failure to receive a notice in the mail (for example if they recently moved or are homeless), or were unable to successfully renew coverage because they needed assistance navigating the process due to a disability.  These new actions run counter to ACA changes that sought to simplify and streamline the eligibility renewal process to retain more eligible people in coverage.  Indiana’s renewal lockout could result in gaps in coverage for eligible people who have difficulty completing the renewal process. 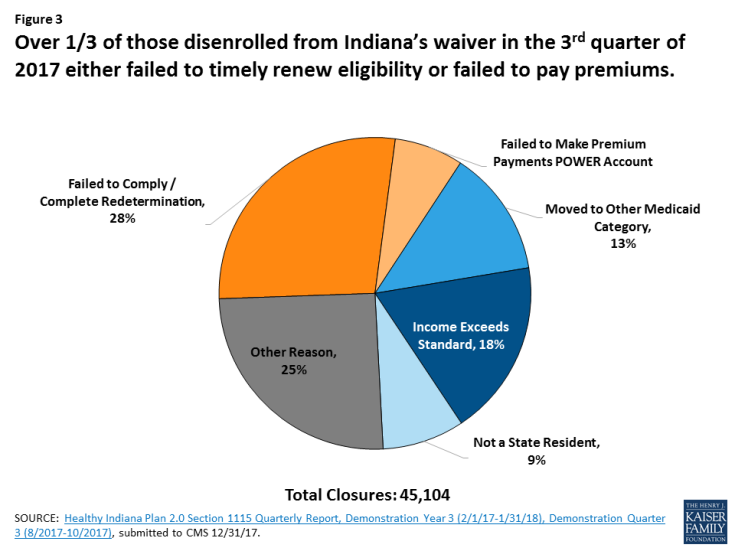 Figure 3: Over 1/3 of those disenrolled from Indiana’s waiver in the 3rd quarter of 2017 either failed to timely renew eligibility or failed to pay premiums.

Data about disenrollment due to failure to complete or comply with renewals and data showing confusion around premiums indicate that administrative requirements create barriers to coverage.  If individuals are getting disenrolled due to problems with renewals or confusion around premium payments, similar administrative, paperwork or process barriers are likely to arise when new work requirements that also were part of the Indiana waiver renewal are implemented.  Individuals who may be meeting the work requirement or trying to prove they are exempt may experience barriers in documenting their work status or navigating an exemption. This will likely result in eligible individuals losing coverage and possibly becoming uninsured.

Data from the state evaluation of premiums can help to inform the future implementation of waivers in Indiana and Kentucky and provide lessons for other states that may consider seeking similar provisions.  In addition to assessing how many people are not enrolled or are locked out or lose coverage for failing to pay premiums it is important to monitor the impact of higher premiums under the tobacco surcharge and the impact of the 3-month lockout for failure to timely renew coverage.  Stakeholders also may want to assess state processes and criteria for identifying people who are medically frail or have disabilities or meet other good cause exemptions to determine how difficult these processes are to navigate, especially because similar processes for exemptions would apply to the new work requirements.

A recent GAO review of Medicaid waivers showed that complete and timely evaluations from the states were not required, so conclusive results were not available.  In addition, federal evaluations were limited due to data challenges and results were not available to the public.  As more Medicaid enrollees and dollars are part of Section 1115 demonstration waivers, and states are making changes that have implications for eligible people to obtain and maintain coverage, monitoring, data and state and federal evaluations will become more critical in understanding how waivers are reshaping Medicaid coverage. While not required under the evaluations, it will also be important to monitor administrative costs and resources required to implement premium and enrollment related provisions and the effect on cost from changes in enrollment.